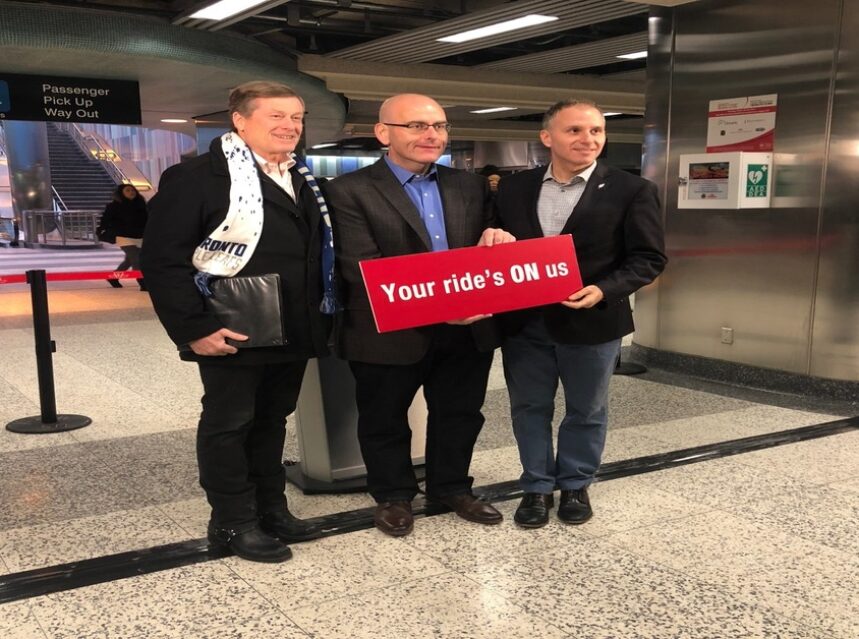 There are a few rare times during the year that the Toronto Transit Commission service is free to ride for all. Well, tomorrow will be one of them!

Steven Del Duca, Minister of Transportation, along with John Tory, Mayor of Toronto and Josh Colle, TTC Chair, were at Sheppard West TTC station today to announce that on Sunday, December 17, people can ride the entire TTC network for free in celebration of the new Line 1 extension into York Region opening.

This is the largest expansion of Toronto’s subway system in nearly 40 years, with a total cost of about $3.2 billion. The province provided $974 million to the project through the Move Ontario Trust. The City of Toronto is providing $904 million, the federal government up to $697 million and York Region $604 million.

“What a great way for the Toronto region to celebrate this milestone. I encourage everyone to take the TTC tomorrow to see the city and to come up to this impressive six-stop extension. We want to celebrate this rapid transit expansion. I want to thank Minister Del Duca and Premier Wynne for agreeing to fully support the cost of these free rides.” – John Tory, Mayor of Toronto.

Great news #Toronto! The entire TTC system will be free Sunday to celebrate the Toronto-York Spadina Subway Extension opening. Thanks to the Ontario government for funding this initiative! pic.twitter.com/0W5w7Ts58D

The new Line 1 extension is among the largest subway expansions in North America in recent decades, with six new stations and 8.6 kilometres of new track. Riders will get from the new subway terminus at Vaughan Metropolitan Centre to the Sheppard West station in about 14 minutes and to Union Station in 42 minutes. Students will also be able to take rapid transit to York University for the very first time.