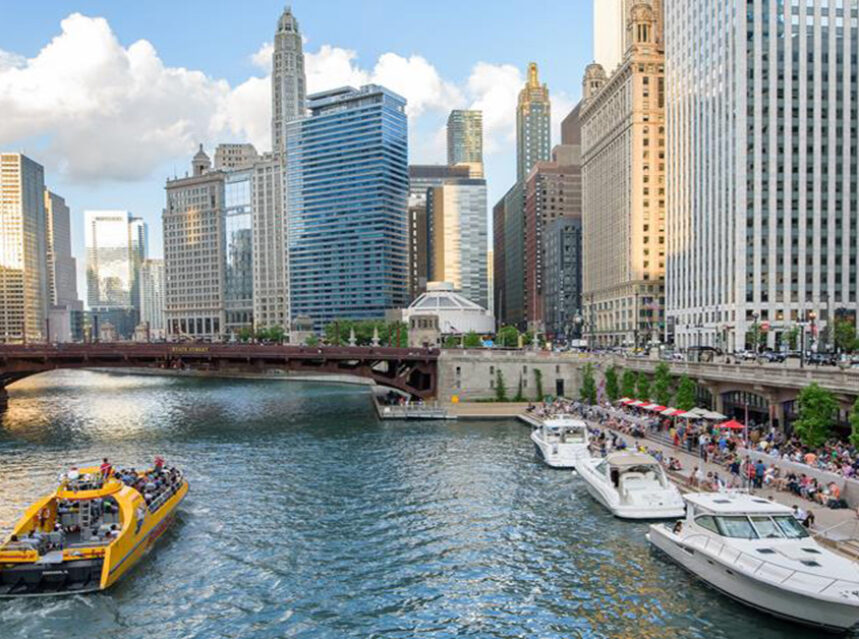 Chicago welcomed 55.2 million visitors in 2017, a new record for the city and a 2.5 per cent increase from 2016. Expanded airport renovations, a continued hotel boom, new dining options and more are just a few reasons to take a glimpse of what’s new and happening in Chicago this Spring and Summer. Visit www.ChooseChicago.com for more information.

Moxy Hotels will debut its first property in Chicago in May 2018, boldly reinventing the lifestyle hotel experience in the Windy City. Moxy Chicago Downtown will welcome guests with its locally inspired contemporary design, industrial chic style and buzzing social scene.

Opening Summer 2018, St. Jane Chicago will be the common ground for uncommon people embracing the arts and culture that defines Chicago. The 363-room property brings together eclectic styles with one-of-a-kind furnishings and playful framed art.

The former 1916 Atlantic Bank Building on Michigan Avenue is currently undergoing renovation, with the goal of reopening as the Hotel Julian in Fall 2018. The hotel is named for St. Julian Hospitaller, the patron saint of hospitality and innkeepers.

Construction is under way for The Hoxton hotel in the Fulton Market District, expected to be completed in 2019. The Chicago branch of the London-based Hoxton brand will stand at 11 stories tall with 175 rooms. Boka Restaurant Group will open a restaurant and bar in the hotel.

Chicago Architecture Centre will be home to an unparalleled range of architectural experiences. The dramatic new space, behind a 40-foot-tall curtain of glass, looks out on some of Chicago’s most iconic buildings.

On April 1, 2018, 360 CHICAGO Observation Deck launched 360 ChiSeries. Home of the TILT thrill ride, 360 CHICAGO has developed a line-up of complimentary activities for those purchasing a general admission ticket (with the exception of 360 Sky Yoga Saturdays). 360 ChiSeries includes a wide range of activities that include 360 Sky Art, 360 Sky Yoga, 360 Sunday Funday and more.

Starting in April 2018, Chicago Detours will debut its new “Fulton Market Factories, Galleries and Calories Food Tour.” Guests will get a glimpse of this booming neighbourhood’s meatpacking past and enjoy a taste of its gourmand present on a one-mile jaunt through Fulton Market.

The James Beard Foundation Awards, dubbed “the Oscars of the food world” by Time magazine, celebrates the best and brightest culinary professionals in America. Chicago is incredibly proud to host the nation’s preeminent honours Monday May 7, 2018. Chicago has 14 James Beard Award finalists and more than 130 restaurants will celebrate James Beard’s culinary legacy and Chicago’s vibrant food scene from April 27 to May 7, 2018, during James Beard Eats Week.

The Museum of Contemporary Art’s I Was Raised on the Internet explores how digital technology has changed how we see and experience the world. Focusing on art from 1998 to the present, the exhibition centers around a number of themes that examine how new forms of identity and selfhood have been enabled by digital networks. The exhibition runs June 23 to October 14, 2018.

Visitors can learn about the filmmaking process through hands-on activities inspired by some of Pixar’s most treasured films, from Toy Story to Inside Out during The Science Behind Pixar, opening at the Museum of Science and Industry (MSI) on May 24, 2018 through January 6, 2019.

This May, Shedd Aquarium will celebrate the diverse and vibrant beauty of marine life through the opening of its latest special exhibit – Underwater Beauty. Featuring thousands of animals representing 100 species, Underwater Beauty promises to be the aquarium’s most diverse special exhibit in its 88-year history. The exhibit opens May 25, 2018 and will run for a limited time.

The Cher Show, the new musical based on the life and six-decade career of the iconic singer and actress, will have its pre-Broadway world premiere in Chicago at Broadway In Chicago’s Oriental Theatre, beginning June 12, 2018 through July 15, 2018.

As the birthplace of modern blues, The Chicago Blues Experience, opening in 2019 near Millennium Park, will be filled with history-driven interactive displays, tributes to local legends and Chicago blues memorabilia as well as a performance lounge and restaurant.

Laver Cup – a tennis competition in which six leading European players go up against competitors from the rest of the world. The tournament will take place September 21-23, 2018. Held in Prague last year, Chicago will be the ﬁrst U.S. city to hold the Laver Cup.

Mayor Rahm Emanuel has announced the city’s eight-year plan to expand O’Hare International Airport – the largest and most expensive revamp in the airport’s history. Through a new capital program valued at more than $8.5 billion, O’Hare’s facilities will receive a major upgrade. With construction to begin in 2019, the transformation is expected to be completed in 2026. The Chicago Department of Aviation is also overseeing major modernization at Midway International Airport. The nearly $400 million modernization program is underway and is set to be completed by Summer 2020.