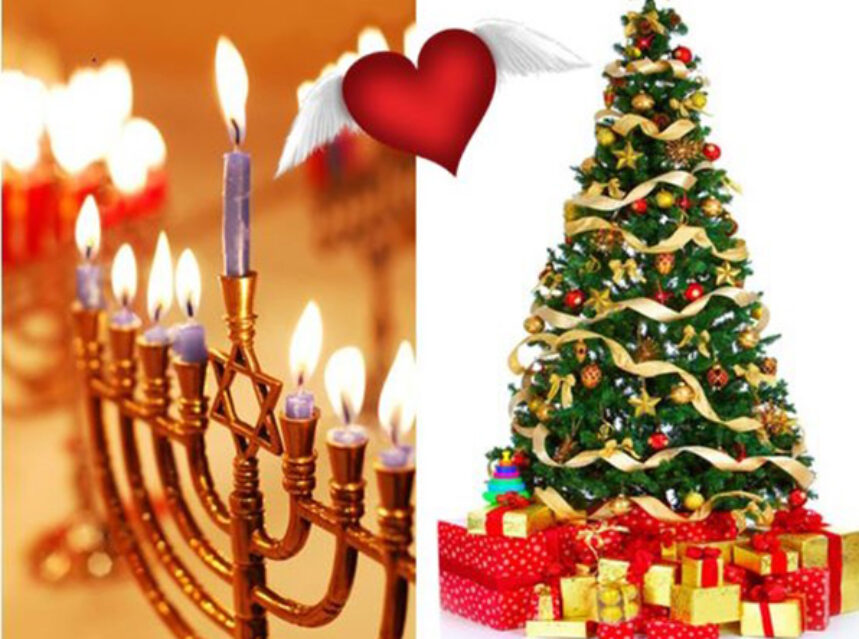 During the last 100 years, the holidays of Christmas and Hanukkah have fallen on the same day only four times, the last being in 1959. This year will be the fifth.

Christmas has always been celebrated on December 25th since 336AD, when Pope Julius I officially declared the date. Hanukkah on the other hand, was first celebrated on the 25th day of the Jewish calendar month of Kislev in 138BC. The Jewish ‘luni-solar’ calendar is based on lunar months and solar years – therefore the date is different from year to year, but both holiday celebrations always start when the sun goes down on the eve before.

This year Christmas Eve and the first night of Hanukkah coincide – and the two holidays are united in more ways than one. The most significant being they both celebrate miracles.

The first celebratory ‘feasts’ of both holidays originated in Jerusalem and both are actual historical events. Christmas commemorates the miracle of the birth of Jesus Christ, born Jewish and who first became a preacher. He spread the word of love, miraculously healed the sick and many followers saw him as the ‘Messiah’ prophesied in the Old Testament. In the end Jesus performed the ultimate sacrifice, dying on the cross to atone for all mankind’s sins. He was then recognized and revered as the ‘Redeemer’ – and as the Son of God of Christianity.

Hanukkah commemorates the Miracle of Light, when in ancient Judea, known also as the Land of Israel, the ruthless soldiers of Antiochus IV ‘Epiphanes’ attacked the Jewish people –  massacring thousands and also desecrating the city’s holy Second Temple by erecting an altar to Zeus and sacrificing pigs within its sacred walls. Led by Judas Maccabeus around 165 BC, the Jewish people fought them off – and then began the task of restoring the temple.

At the time of the temple’s rededication there was very little oil that was not left tainted and impure by the soldiers. Oil was needed for the seven branched candelabrum in the Temple, which was supposed to burn from evening until morning 7 days a week, but there was only enough oil to burn for one night, yet miraculously it burned for eight days – the time needed to sanctify some fresh oil. Today a nine branched ‘menorah’ is lit with candles, eight representing the eight nights when the oil miraculously burned – the ninth is used to light them each evening. Hanukkah celebrates the Miracle of Light, not the victory over Antiochus’ army.

Light is at the heart of both holidays.

Christmas also celebrates light. For hundreds of years Christmas trees were lit up by candles. Jesus is the ‘spiritual light’ to Christians around the world – and was born under the Star of Bethlehem, a bright light appearing in the sky above, guiding the ‘Three Wise Men’ with their gifts in hand to him.

Fast forward to the year 2016. The traditional Christmas tree is now lit up with electric lights, homes are decorated outside with miles of stringed LED bulbs in every color and configuration imaginable. The Three Wise Men now appear as decorative tree ornaments or in nativity scenes played out by actors and as sculptures in indoor/outdoor sets. But there is the mythical Santa Claus who travels, albeit not through desert sands but through a starlit sky, laden with gifts for all. Families and friends still gather in warmth and love to celebrate and enjoy a holiday meal together.

Hanukkah is also a time when families and friends gather to share a holiday meal, but instead of stuffed turkey or glazed ham at the top of the menu, there are potato latkes fried in oil – symbolic of the oil that lasted eight days. ‘Sufganiyot’, deep fried doughnuts filled with jelly and sprinkled with sugar is served instead of Christmas cookies or figgy pudding. There might not be any eggnog on a Hanukkah table, but I assure you other bottled spirits flow. Gifts are also shared, mostly given to children from their parents or grandparents over the eight days of the holiday. Menorahs can now also be found lit up electrically, placed in the windows of homes or even outside in larger-than-life sizes.

In medieval times, games such as knucklebones (modern day jacks), cards and the tossing of dice were played during Christmas. Some of the games are still played today, but have given way to electronic game devices. During Hanukkah a game dating back centuries uses a Dreidel, a four sided spinning top with a Hebrew letter on each side. The four letters NGHS represent the phrase ‘Nes Gadol Hayah Sham’ which means ‘a great miracle happened there’ – but it also competes with the lure of electronic games.

Leading up to the festivities, children of both faiths take to the stage in theatrical plays, reenacting the original events of Christmas and Hanukkah. ‘Stars’ align in Nativity and Temples scenes in auditoriums everywhere – and camera toting parents are filled with pride.

There is also the religious aspect of both holidays, underlined in holy prayers or personal meditations. During Christmas a special Midnight Mass service is held in churches – and although Hanukkah is not the most religious holiday on the Jewish calendar, there is an extra reading from the Torah with additional observances added to services in synagogues.

But the most important message for both, is love and hope under one spiritual light – a light shared by every religion and faith in the world. As the holidays unite this year in miracles, may we embody the message of ‘peace and good-will among human beings’… and may we all become the miracle.

A very merry ‘Chrismukkah’ and a Happy ‘Hanukkamas’ to all!