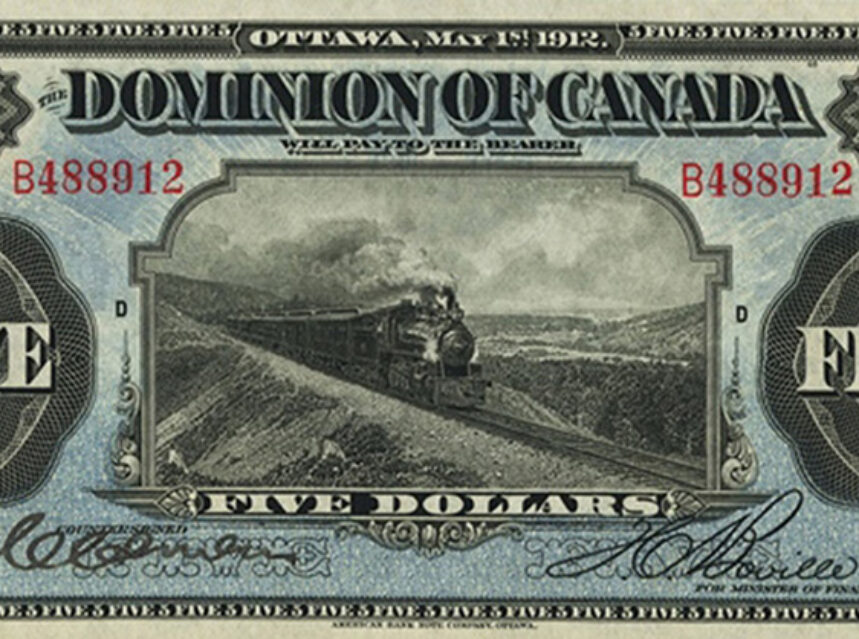 1912  Dominion of Canada $5 bill – Before the Bank of Canada was created in 1935 and put in charge of issuing our paper money, the Finance Department of the Dominion of Canada was responsible for producing banknotes. These “Dominion notes”, first issued in 1870 displayed wonderful vignettes that became progressively more intricate. Colours became more vibrant, and the notes themselves became increasingly recognized for their artistic merit. Tastes are subjective, but there is little argument that the 1912  Dominion of Canada $5 bill is the most eye-catching bill ever produced in this country.

Work on it began in 1906, and several different designs were suggested at that time, including mining scenes, and portraits of the Earl and Countess Grey (like on the $1 bill of that period), but ultimately a depiction of a train was chosen.

The front depicts the passenger train “Ocean Limited” traveling through the Wentworth Valley in Nova Scotia. Intricate scroll or lathe work, an important security feature back then, is found around the borders and throughout the entire back of the note with a Roman numeral V at the centre.

Coins and banknotes with particular themes, trains included, are always popular with collectors. The vibrant shades of blue that colour each side add to the appeal of this 100-year-old note.

Unlike coins, banknotes in Canada were only modified the year a new design was issued. This design circulated over two decades with the same 1912 date until the final version was produced in 1931. During that period, several different signature combinations were used, as the ministers of finance changed. Other revisions were made as well, including adding a blue seal over the word “FIVE” to the right of the train. Collectors have always adored this issue, and both demand and prices for these notes are always strong. Typical used examples can sell for $500-$1,500, with uncirculated perfect notes selling for a multiple of that price.

Canadian paper money is a popular area of collecting with many different subsets to focus on, including Chartered Bank, Dominion of Canada, and Bank of Canada issues. We look forward to exploring some of our many favourites in upcoming articles.

Michael Joffre is an avid Numismatist, and President of Carsley Whetstone & Company Inc. a Montreal coin dealer with a history dating back to 1928. He can be reached at mike@carsleys.com, www.carsleys.com, or 514-289-9761