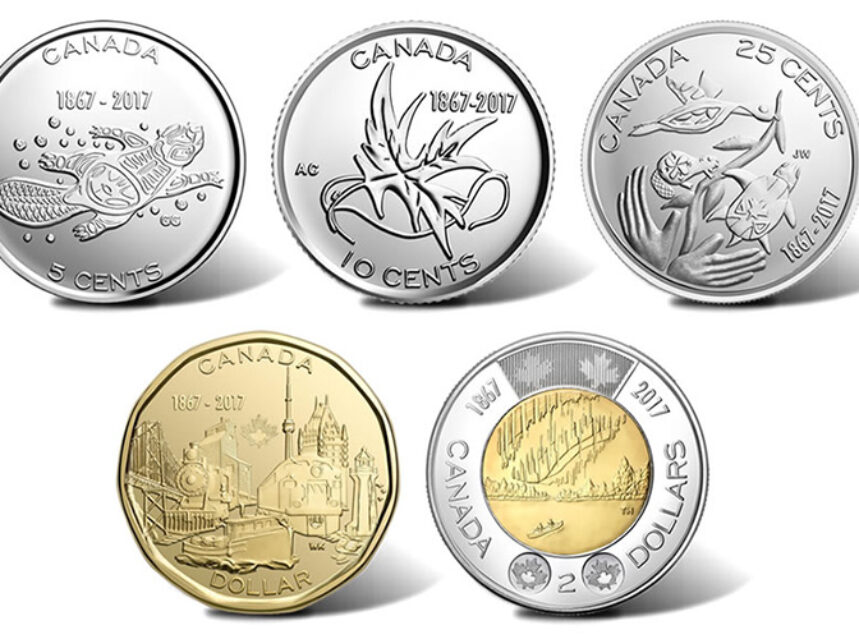 Coin Collecting – Exactly 50 years ago, Canadians from coast to coast gathered together to celebrate the centennial of Canada’s Confederation in 1867. The Expo celebrations of 1967 produced a host of coins and paper money to commemorate the historic event, and they remain among the most cherished collectors items in Canadian numismatics.

Five decades later, we celebrate the 150th anniversary, or sesquicentennial, of Confederation in much the same way. The Royal Canadian Mint, among the most respected coin manufacturers in the world, has worked hard to put out a series of coins that represent “our Canadian identity, our collective pride, and the significant moments we’ll never forget.”

Perhaps the most visible change in our coinage (pun intended) will be a set of new circulation coins with special commemorative designs. The nickel, dime, and quarter will feature stylized imagery of quintessential Canadian flora and fauna, including a colourized version of the new 25 cent piece. The design for the Loonie, “Connecting a Nation,” will display the trains, boats, bridges, and buildings that define and connect our cities and town from East to West. Collectors and non-collectors alike are sure to appreciate the new Toonie, showcasing the Northern Lights.

The Bank of Canada will also release a commemorative $10 banknote to mark the historic event on July 1. The BOC has only issued special-edition notes on three other occasions: King George V’s Silver Jubilee in 1935, the centennial of Confederation in 1967, and after Queen Elizabeth II became Canada longest-reigning monarch in 2015. No doubt the new 2017 notes will be a welcome addition to this series.

Coins and banknotes have always been an important part of our shared heritage. The new 150th anniversary issues are certain to add to that legacy. Whether you’re just starting out or have been collecting since the 1967 centennial, be sure to keep an eye out for these treasured collectibles. Stay tuned for additional articles on Canada 150 throughout 2017.

Michael Joffre is an avid Numismatist, and President of Carsley Whetstone & Company Inc. a Montreal coin dealer with a history dating back to 1928. He can be reached at mike@carsleys.com , www.carsleys.com , or 514-289-9761