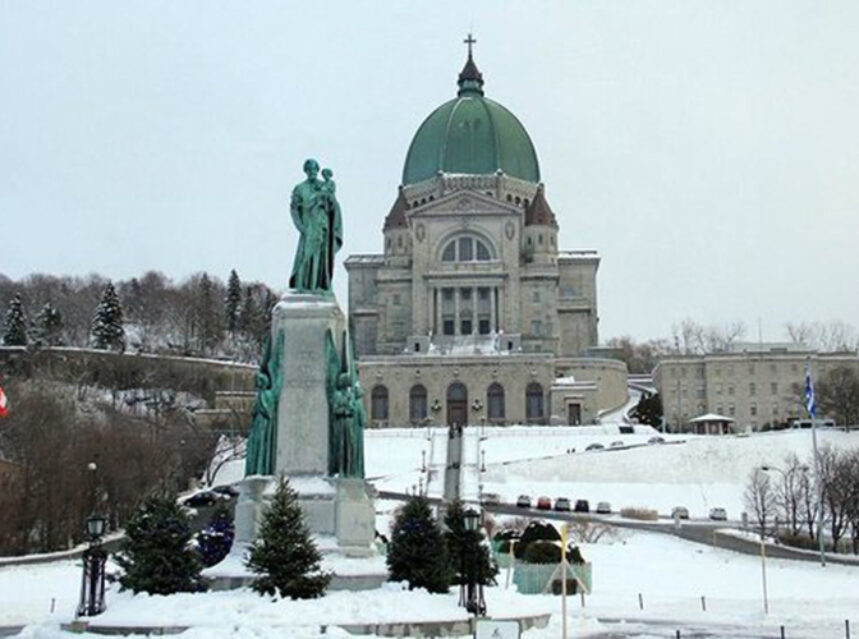 One of Montreal’s most well-known landmarks, St. Joseph’s Oratory, is continuing its longstanding tradition of hosting a crèche (nativity scene) exhibition this season. But renovations have temporarily closed the Oratory museum, meaning that the crèches are now exhibited throughout the Oratory, notably in the hall facing the museum on the fourth and fifth floors. There are only some 40 exhibits this season compared with 200 normally. This reduced format also means that it is free to see the crèches this holiday season.

The crèche scenes have been exposed annually since 1955 at the Oratory Museum. The scenes typically involve figurines, but also include tapestries, paintings, and puppet figures. Under the same roof as the museum is the largest church in Canada with masses given in French and English. A shrine including the tomb of the Oratory founder, Saint André of Montreal, is there. The site also reputedly has healing powers. Besides this, there are superb vistas over Montreal, looking northwest.

“Folk art developed over the centuries as a depiction of what is recorded in the Gospel (Bible) about the birth of Jesus. It is highly interpretive. No one can claim that their scene is accurate. Details are scarce, so artists have filled in the blanks,” Father Charles Corso previously told us.

And this is what is what really makes this exhibition fun; the huge variety of different depictions of the Nativity scene with characters cast in costumes from central Africa to Arctic Canada.

Father Corso claims that people of increasing diversity are visiting. “From peoples’ dress, you can often tell that they are not Christians. There are men here with turbans and who must be Sikhs. But people of other faiths visit because this is holy place. Most religions confer blessing on those who visit holy places, especially those on a mountain. So more and more non Christians are visiting to find out what this worldwide celebration (Christmas) is all about.”

The original Christmas story began in a manger (stable) in Bethlehem some 2,016 years ago. According to doctrine, Jesus was born in a stable, surrounded by farm animals. “Most of our artists use cardboard, straw, or incense paste used as mediums” Corso told us. “The Holy Family is depicted as the itinerants and immigrants that they were. They ended up in a stable where Mary went into labour. This poverty of means echoes the poverty of the Holy Family.”

The museum is accessible to those with disabilities via two elevators, but maybe visitors will leave their wheelchairs behind? Huge piles of discarded canes and crutches left behind by visitors are testament to St. Joseph’s supposed curative powers. Two gift shops are available for anyone wanting to buy souvenirs. Parking is available on site at the Oratory and a $5 donation is requested for that. A free shuttle bus travels between the different levels of the site. Cote-des-Neiges metro station is nearby.

(Show your OPUS card for discounts at gift store, etc)