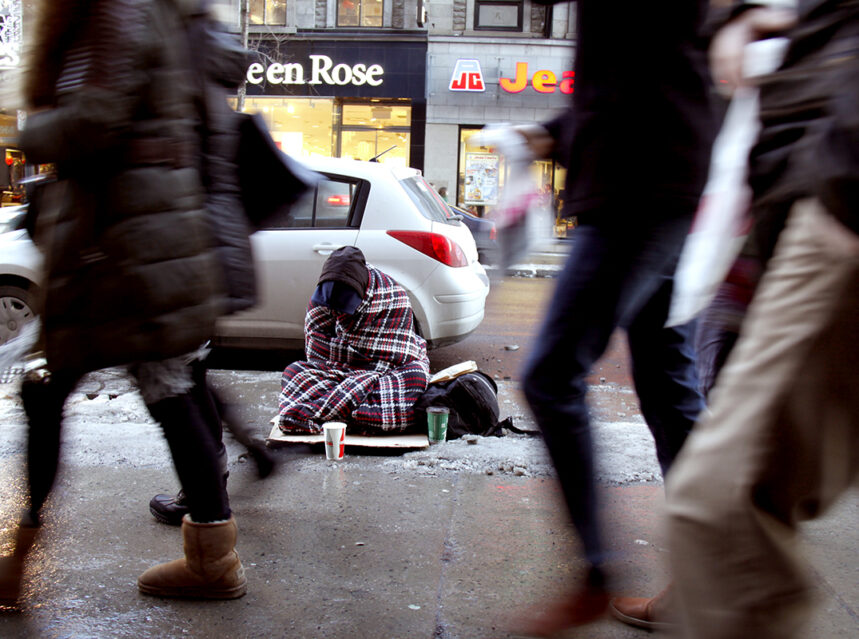 It’s the ‘most wonderful time of the year’. The holidays are upon us, the lights are up, the gifts are wrapped – or soon to be. Turkey and tofu recipes are being shared on social media along with photos of innovative decorating ideas and holiday vacations are booked. The spirit of love is all around. But so are the faces of poverty – faces all over Montreal, all year round, considered to be living below the poverty line or the ‘working poor’. The holidays could be the ‘most difficult time of the year’ for many.

It’s also the time of the year when Food Banks go into full swing and charities struggle to help those whose only concern is putting food on their plates and keeping the heat on in their homes. In Montreal the statistics are overwhelming. There are too many people struggling, working hard who still can’t make ends meet. It’s not happening just in Montreal but all over Canada and the rest of the world – and it is very wrong in this day and age.

A report from Toronto, based on information from Statistics Canada Tax filer data for 2013, showed that 26.8% percent of children ages 0-17 in their city are living below living below the ‘Low-Income Level’ – and Montreal was second on the list at 25.5%. A more recent study by Centraide of Greater Montreal and the Institut national de la recherche scientifique (INRS), found that between 2001 and 2012, the number of those who count themselves among the ‘working poor’ had grown by more than 30 per cent. In 2001, there were about 91,000 people in the region who fell under that category. By 2012, there were about 126,000.

Now one in four people between the ages of 18 and 64 in Greater Montreal, which also includes Laval and the North and South Shores, are considered to be among the ‘working poor’. The study also found that 38% of them are single parents and mainly women. The highest rates of poverty in Montreal alone are found in Parc-Extension at 30.7 per cent, Côte-des-Neiges 18.9 per cent, Little Burgundy 18.5 per cent, Pointe-Saint-Charles 18.2 per cent, Saint-Michel 17.6 per cent and Saint-Henri 17.5 per cent. Poverty in the West Island, although less visible, still affects over 22,000 people.

One would think that in the year 2016, in a society that is supposed to benefit all its people, or for that matter the human race, who consider themselves the smartest species on the planet – no person, no child, should ever have to go without food or a proper roof over their heads.

We are living in an era that will be looked back upon as one of the most turbulent times in history. Humankind, for all its intelligence, has followed a path that has led to this great imbalance. There is war, there is terrorism, there is environmental destruction and there is great poverty, all within a framework of great riches – riches in terms of material things and the emotional gratification accompanying it.

The recent elections in the USA clearly showed the divide. Unhappiness and fear were always there, but finally brought to the surface. Now that it is here for all to see, how will it be addressed?

Children are exposed to the overabundance they see all around them, in shopping malls and on television. They see it as the ‘real world’, the way things should be, yet in reality it is not happening in their homes. Their parents, who work hard and often hold down more than one job, are witness to all this. Many go without food to make sure their children are fed. And there are people who struggle with mental illness or physical limitations, and people who did not have the same opportunities to get University degrees – where do they fall?

Those who struggle financially need a voice. We rarely hear them complain because many manage to find the true spirit of the holiday season and are nurtured through their faith and love. Isn’t that what it is really all about?

If Mayor Coderre and his city councilors could find the millions upon millions of dollars to celebrate Montreal’s 375th anniversary, then they could certainly find a way to provide better and affordable housing for the citizens who need it. If the city is able to spend close to $40 million to light up the Jacques Cartier Bridge, then why are there children going to bed without a meal? If they can invest over $4 million in temporary roadwork for a Formula E all-electric vehicle road race and over $3 million on stump-shaped granite sculptures to be installed on Mount Royal – and still have constituents under their care who go without heat and warm clothing in the winter or instead of the privilege of dining out, make trips to the closest food bank, then something is terribly wrong here.

The Food Banks and Charitable Organizations are doing their part – and so are the many who contribute to them. Although there are many with wealth above the norm who play a very generous and significant part in these contributions – statistics show it is the middle class who donate a much bigger share of their income, helping to put food on the shelves for those in need.

So let’s take a moment, while appreciating all the wonders that go with the holiday season, and include in our New Years’ resolutions to try and do more about it. We have the means, let us make the change happen – if only for the children.

I leave you with this link to the video and song ‘Do They Know It’s Christmas?’ written in 1984 by Bob Geldof and Midge Ure in reaction to the 1983-85 famine in Ethiopia. Most of it was recorded and mixed in a single day by ‘Band Aid’, the super group put together with artists like the late David Bowie, U2, Sting, Annie Lennox (Eurythmics), Paul McCartney and many more – and it’s just as pertinent today.