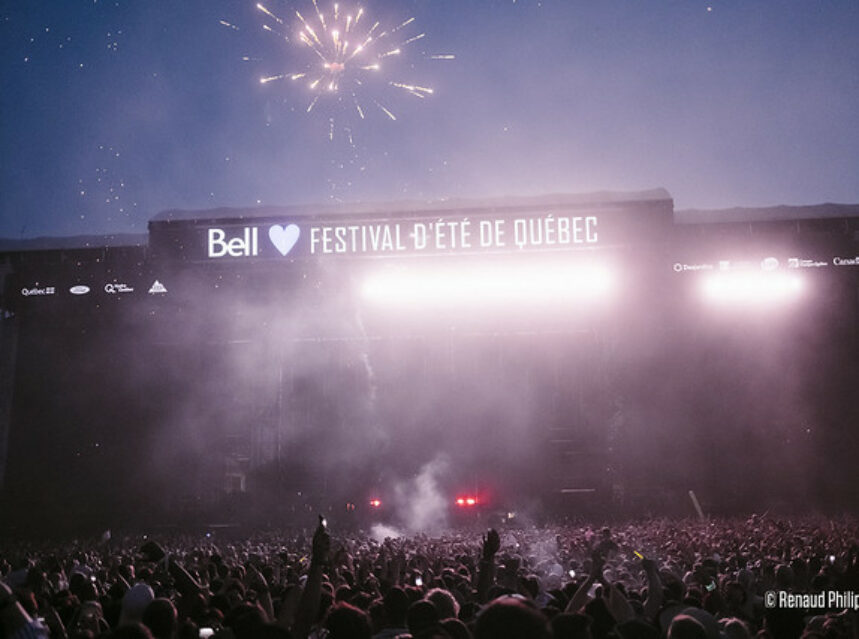 From every opinion and every angle, the Festival d’été de Québec is unquestionably guaranteeing a wealth of stories with a range of emotions and intensity that few festivals can offer. Starting in 1968 on the Abraham plains, the biggest music festival in Quebec and Canada never failed to get fans and locals to gather up and stack up upon each other like it was the original 1769’s war – and that’s just it.

Consistently great and spectacular. You’ll get the locals, the hardcore fans and the ”I don’t know who’s playing” fans to mix and mingle in a long, not-expensive festival and a historic scenery… The stories are abundant, bipolar (at best)  but all purely memorable.

The city celebrated a spectacular  51th edition last year with headliner such as Neil Young, Shawn Mendes, Foo fighters and The Weeknd. FEQ 2019’s headliners? Twenty One Pilots, Slipknot, Mariah Carey, Blink-182, Imagine Dragons, Lynyrd Skynyrd, Kygo, Diplo, Logic, The Offspring, Alt-J and Corey Hart and about 270 other artists gracing the stage with music and the city with stories.

1- The Price  – We doubt you missed that one, unless you are just now learning about the festival. After all The FEQ is a secret Gem that’s often under the radar – especially for the Coachella regular. That being said, they end up paying 600$ for the first weekend only, that’s excluding traveling or amenities cost, where we ended up paying somewhere between 95 to 115 $ for a week and a half of music and poutine.

2- The  POP-UP shows – this year’s spontaneous POP-UP shows were nothing less than a success. If you knew Quebec city well enough you could probably figure out the location’s clues that were left by the team online… or if you were lucky enough to randomly walk into one… Either way, it was worth the times ! The sun was almost scorching every day of the festival and each Pop-up invited themselves in unique locations – here are just some of them :

3- The Festival across the city !

4- Musics from the four corners of the world – If you haven’t noticed, the diversity of music genres presented on the FEQ line-up  is incredibly eclectic and unique. Every year the amount of artists from around the world amazes us and this year did not fail. Every styles and genres was represented and spread through all of the city’s stages which offered widely different views and experiences.

Many complaints and broken hearth after the sudden interruption of one of the festival main headliner – Interruption might be a painful understatement. After gathering one of the festival’s biggest crowd, the rain added itself to the battlefield at the very first step of the dragons on stage.

Pouring rain and winds that drew energy from the  humidity of a warm clear blue day. Nevertheless the Nevada’s band pushed and started the show earlier giving the fans at least two songs that were nothing less than epic … and let’s just say refreshing.

After playing fans-favourite : ‘‘I’m a beliver’‘ and ‘‘It’s time”, the band were forced out of the stage and asked the crowd ” will you still be here in 10 minute ?’‘ . The answer were strong screams of passion from a crowd who gave up trying to stay dry 15 minute ago.  Well aware of the irritating situation the lead singer decided to run with a line of body guard through the crowd and managed to entertain until an immediate evacuation was requested from the officials

Unfortunately the same scenario repeated itself at the ”little sister”stage in Place Youville. What was scheduled as a Quebecois Rap party also got cancelled  later dues to the severe wind right after a solid and warm set from Koriass and only a few songs from Loud.

6- The Run to Safety and Evacuation

Obviously, the rain and immediate emergency state did not calm down the family with kid and the unsatisfied fans who waited as long as 12 hours to see theirs favourite band. Most had a bitter little feeling running in the rain or waiting for the bus. The evacuation was part of safety protocol that apply when wind is recorded over 70 km/h. In this case, Wind were recorded at 90km somes  even 100km/h

Most would agree that the evacuation of the festival main ground was impressive considering everyone was trying to leave at the same time. The organizer stated that the ground was cleared within 13 minute – that’s debatable –   La ”Grande Allée, the very first street at the gate of the festival, where most of the activity relay after the show, was a complete chaos and supposedly took more than hours to cross

Families with young kids might have had a nightmarish experience realizing that no one gived a damn about their kids in this state of panic. The festival rarely had a evacuation and this experience will allow the organizers to review the procedure.

QUEBEC*** stay safe. we're so sorry the storm cut the set short and hope you all got out ok. we'll be back soon, we promise. @FestivalEteQc pc:@showbizznet pic.twitter.com/Tp4ik3TUtq

10- Eric Lapointe ”Carte Blanche”. Like it or not , he’s one of Quebec favourite rocker and im sure you would have appreciated the ” show of his life” , or so they called it.

It was a unique gathering celebrated by multiple generation of la francophonie that gave a satisfying memorable moment for Quebec’s culture. The experience was even joined by Cirque Éloize for a short performance.

Carey brought a nice touch of femininity to an otherwise masculine roster of headliners. Her infamous New Year’s Eve Lipsync debacle in NYC back in 2016  is not forgotten, but Mariah Carey rose to the occasion for her only Canadian appearance this summer and gave fans what they were hoping for. (unless you were hoping for Christmas song)

Obviously shy and not enthusiastic about the rain – She was certainly not going to do her typical 20 wardrobe changes. “I should probably take these shoes off but I can’t even do it myself so I’m just going to stand here so I don’t slip and fall,” Carey said as she asked for a mic stand that planted her beside her piano player.

Thank you so much Quebec for making it "through the rain" with me at the show last night. You were an incredible audience and I appreciate you so much. Hope you enjoyed the show even though I was doing my best not to slip and fall on my a** lol! @FestivalEteQc pic.twitter.com/vRisUli3gn

#FEQ, Show Cancelation for one of the headliner of the Hip-Hop night, Lil Pump, must unfortunately cancel his visit dues to legal issues. Alaclair Ensemble will open the night, along with Jazz Cartier, Gucci Mane and Logic

Louis Bellavance , the director of programming already mentioned that he was aware of what fans were hoping for. He already promised to look into booking the usually requested U2, Coldplay and even Eminem.

Bellavance added that he had very serious conversation with Eminem for the FEQ 2019. Is it possible that he’d be a potential candidate for 2020. After the cancellation of the Ontario’s Roxodus Music festival earlier in the month, Aerosmith  also mentioned their interest in playing on the FEQ stage.

Avenged Sevenfold also ”owe” a concert to the Quebec fans. The group cancelled a few hours before their 2018 performance due to the lead singer injuries. They still haven’t returned on stage since but hopefully they’ll be back before 2020.

14-Electro Night with DIPLO AND KYGO

A Punk/Rock throwback night that ended the festival with a decent crowd and a fair amount of attention.

Blink 182 delivered a set list that included in major part the album :  Enema of the State. Celebrating the album’s 20’s anniversary it was an appropriate timing. But it was apparently a short album since the show ended up after 50 minutes. A bit weak for a festival finale, but to their benefit they were playing in the US the day before and the day after. Nonetheless the concert included a big production and included what you’d visually expect from a punk show.

Here’s more pictures from the festival