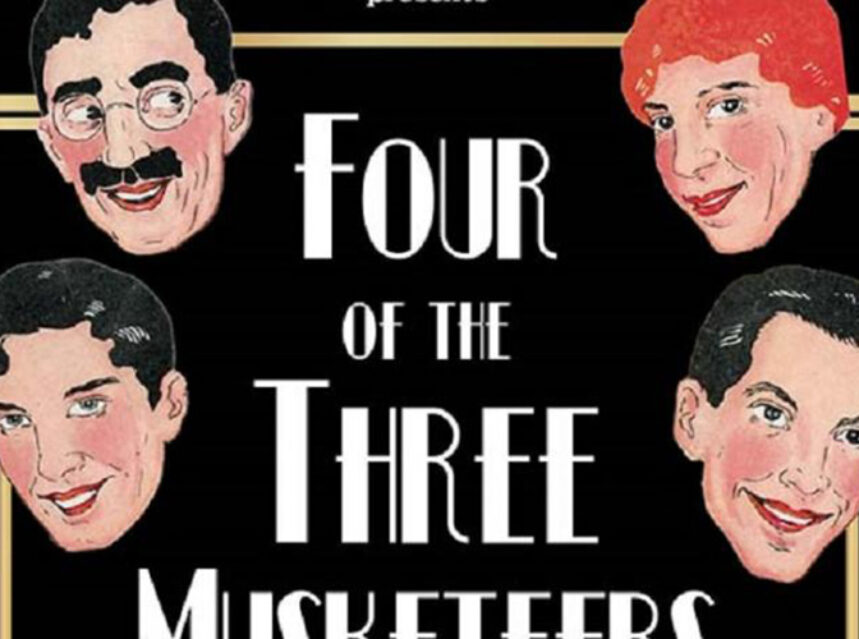 I have been a fan of the Marx Brothers (in its three- and four-brother incarnations -Four of the Three Musketeers) for over 40 years. I have seen all of their movies, watched countless reruns of Groucho’s TV game show “You Bet Your Life”, and on the book front, have read practically every book written by them and about them, from such memoirs as Groucho and Me and Harpo Speaks!, to oral histories like The Marx Brothers Scrapbook, to collective biographies such as Groucho, Harpo, Chico and Sometimes, Zeppo – Four of the Three Musketeers.

…At least that what I thought, until I got my hands on the latest addition to the Marx Brothers canon, Robert S. Bader’s Four of the Three Musketeers.

Practically every book written about the brothers always had a chief focus on the 13 movies they did as a quartet and trio between 1929 and 1949, including such classics as “Animal Crackers”, “Duck Soup” and “A Night at the Opera”. A lesser portion of those books (starting with the first published collective biography by Kyle Crichton in 1950) mentioned the fact that the Marxes got their start in show business on the stage, first in vaudeville, then on Broadway (which was encouraged and engineered by their devoted, sassy mom Minnie Marx).

With Four of the Three Musketeers (the title is taken from one of the songs that was performed in the Marxes’ third and final hit Broadway show “Animal Crackers” in 1928), Bader has given this well-known, but not widely written, aspect of the Marx Brothers story the biographical spotlight that is quite long overdue; and after reading this exhaustively researched and factually thorough account, it’s a book that no devoted Marx Brothers fan should be without.

Bader, who edited an anthology of Groucho’s newspaper and magazine articles nearly 25 years ago called Groucho Marx and Other Short Stories and Tall Tales, has now earned the right to the pantheon of being an official Marx Brothers expert with this book. With plenty of meticulous research, he has chronicled the 40-year period between 1905 and 1945 when the Marx Brothers polished their comedy act and developed their respective, unique personas on the vaudeville and Broadway stages, and during the latter part of their careers, returned to the stage to preview select scenes from several of their later motion pictures, including “A Night at the Opera”, “A Day at the Races” and “Go West”.

Being an avid Marx Brothers fan in particular – and a show business history buff in general – what I particularly enjoyed about the book is how Bader used his penchant for thorough research to re-examine the many stories of the brothers’ vaudeville and Broadway years that have attained legendary status amongst the multitude of their fans past and present. Utilizing many of the books that have been published since 1950, not to mention contemporary newspaper and magazine articles and trade paper reviews, Bader examines the many sides to these stories and tries to draw a conclusion of which story (and whose side of it) was the more legitimate one, whether it dealt with the defining moment in 1909 in Nacogdoches, Texas when the Marx Brothers transformed from a singing act to a comedy act; how Harpo’s persona really went silent; the circumstances that lead to the brothers getting their famous stage names; and how Groucho went from wearing a false moustache to his famous greasepaint moustache in 1921.

As well, the reader gets treated to some unknown stories about their years trodding the boards from one small town to another, such as how Groucho was the only brother who has show business aspirations, and the rest of his brothers joined him onstage rather reluctantly (and mainly to the prodding encouragement of their mother Minnie, especially with the case of younger brother Zeppo, in which Minnie got him to join the act in 1918 as a way of getting him away from the street gangs that he was hanging out with); and because the brothers toured on smaller, renegade vaudeville circuits, they were blacklisted several times from performing at some of the best theatres in the more prestigious Keith and Orpheum circuits.

And Bader paints a portrait of the show business world – particularly the vaudeville world – that deftly sets the background of how the Marx Brothers developed their act on so many stages across North America, whether it be the widespread, yet abusive powers of the United Booking Office agency that determined which vaudeville acts performed in the best venues along the most prestigious circuits, the greed and tyranny of vaudeville theatre managers and owners, or the popularity of “tabloid”-type productions (which were basically two small scale shows that were combined as a double bill), which were the type of shows the Marx Brothers performed as they became the toast of vaudeville between 1910 and 1922.

As an added bonus, Bader includes a detailed, annotated chronology of every Marx Brother stage appearance between 1905 and 1945, whether it be as a group or as a solo act, the dates, cities and theatres, and any interesting – if necessary — facts or details about a certain stop on a certain tour (on a local angle, the Marx Brothers performed in Montreal at the Princess Theatre in September of 1919 with their revue show “’N Everything”, and performed several times in Toronto between 1916 and 1922).

Four of the Three Musketeers is a fascinating, indispensible book that details the evolution of one of the greatest comedy teams as they went through a long, bumpy trial by fire through the world of live stage shows, and through that trial by fire, struggling vaudevillians Julius, Adolph, Leonard and Herbert became legendary comedians Groucho, Harpo, Chico and Zeppo.