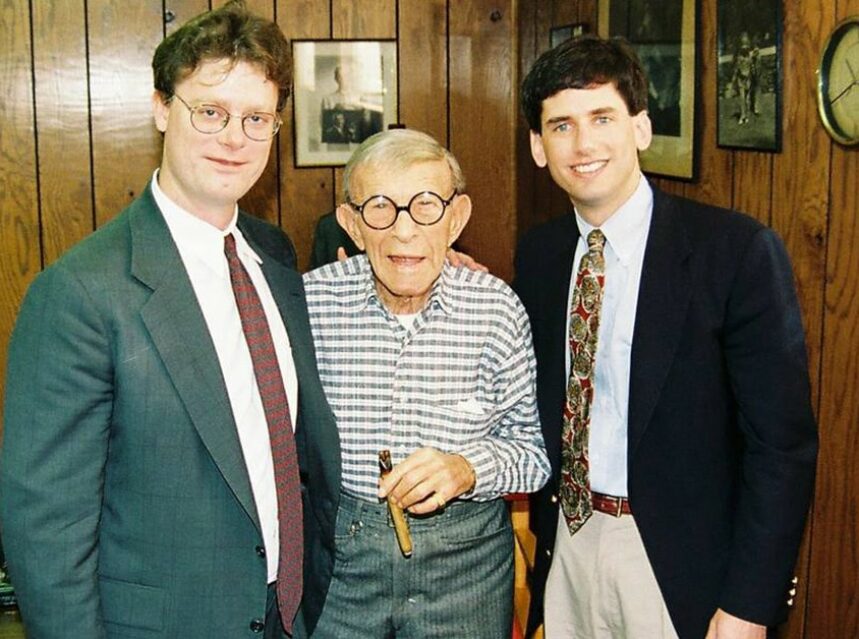 Hollywood Heyday – There’s an old saying that classic movie buffs always lament, in which “they don’t make movies like that anymore.”

Although it does apply to the quality of movies that were produced and released during Hollywood’s golden age from the 1920s to the 1950s, it can also apply to the caliber of legendary actors and actresses who appeared in them. For many, those performers who graced the silver screen like Katherine Hepburn, Cary Grant, Humphrey Bogart, Clark Gable, Bette Davis and Marilyn Monroe could be genuinely regarded as “movie stars”.

Back in 1978, David Fantle and Tom Johnson were two high school graduates from St. Paul, Minnesota who had a passion for classic movies from that golden age in Hollywood. Rather to be just content with watching those movies on their local TV station’s late, late show and conducting special screenings at senior residences, the duo decided to take the next step and conduct interviews with as many of these surviving silver screen legends that they would publish in the student newspaper at the University of Minnesota, where they were just accepted.

With a lot of grit, determination and ambition, Fantle and Johnson persistently contacted many of these legends through numerous phone calls and carefully written letters (remember, this was way before the internet and text messaging were around to provide a major source of instantaneous personal communication). Somehow, their persistence paid off, as both Fred Astaire and Gene Kelly agreed to be interviewed by them. And through a lot of scrimping, saving and resourcefulness, made the trip to Hollywood to conduct these initial interviews of their screen dreams.

With Astaire and Kelly as their launching points, the team of Fantle and Johnson managed to conduct over 250 interviews over the past 40 years with many of these screen legends from Hollywood’s golden age … and how they landed these interviews are just as fascinating as what their subjects had to say about their careers as movie stars.

Fantle and Johnson have accomplished the arduous task of sifting through these 250 interviews to select 75 of them to become part of their deeply fascinating book Hollywood Heyday.

The book is a collection of these stand-out interviews with not only actors, but also writers, directors, composers, choreographers and journalists who played a vital part in building Hollywood’s golden age. And the list of celebrities who are featured in the book is quite impressive (and would fill a multitude of theatre marquees, to say the least): George Burns, Bob Hope, Lucille Ball, Vincente Minelli, Shirley Jones, Esther Williams, Charlton Heston, Gregory Peck, Hoagy Carmichael, James Cagney, Janet Leigh, and of course, Fred Astaire and Gene Kelly, as a sort of short list.

What I found so striking about Hollywood Heyday were two things. First of all, how Fantle and Johnson’s passion for classic Hollywood movies and penchant for research evolved into questions that got their interview subjects to open up about their respective careers in Hollywood, and in some respects, reveal some of the interesting and quirky aspects of their personalities. For example, DeForest Kelley admitted that he was a rather self-described lazy actor, and that after “Star Trek” was cancelled by NBC, realized he could make more money doing personal appearances at Star Trek conventions than accepting acting parts on TV; composer Andre Previn admitted that Gene Kelly was difficult to work with, and was very set in his ways when it came to musical numbers and dance routines, whereas co-director Stanley Donen was more flexible and open to discussions and suggestions; director Mervyn LeRoy (“Little Caesar”, “Mister Roberts”) was barely communicative when he was interviewed, and the duo deduced the reason why LeRoy had over 130 framed autographed movie stills on his walls (and more stored in a metal filing cabinet) was that he would rather let those photos do the talking for him about his stellar career as a director during the early days of the talkies.

Second, their strong penchant for observing the environment and the circumstances that surrounded them during each interview were just as interesting as the subjects themselves. For a good deal of the long surviving legends who were profiled by Fantle and Johnson, it almost has a Norma Desmond/Sunset Boulevard quality to them, and are indicative of the fading glory they were experiencing, at times not realizing that their years of superstardom were way behind them or were shielded by domineering or oblivious handlers. One sad instance of the latter was their interview with James Cagney at his Coldwater Canyon home about 40 years ago, in which they were almost rebuffed by Marge Zimmerman, Cagney’s personal assistant at the time, who was later embroiled in controversy when she was accused of leeching off Cagney for her own personal profit, which was later reported in an article in Life magazine.

Hollywood Heyday is a riveting collection of profiles that give a rather stark, humanistic look at these selected 75 Hollywood legends (both in front of and behind the screen), and how the motion picture capitol functioned in the days when the studios like MGM, Warner Bros., Paramount and Universal ruled like kings, and its stars were their loyal subjects. It’s almost like a living embodiment of Norma Desmond’s immortal line from “Sunset Boulevard”, in which these stars are still big in the hearts and minds of their fans … it’s the just the pictures that got small.