Last summer at the Just For Laughs Festival presented by Videotron in association with Loto Quebéc, NHL star P.K. Subban returned for an emotional goodbye to Montréal, trading in his skates for a microphone to host P.K. Subban: Shots Fired, a one-of-a-kind one-hour comedy special airing on January 2, 2017 at 9 p.m. (9:30 NT) on CBC. 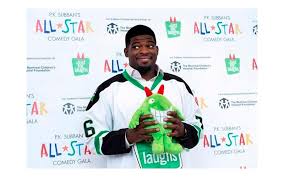 Subban throws punch lines not punches as he presents a lineup of some of the best comedians working today including Jeremy Hotz, Nate Bargatze, Dom Irrera, Tom Rhodes, Rebecca Kohler and the Sklar Brothers. Incorporating elements of his charity into his performance, audiences get a glimpse into his very funny comedic side.

Opening the JFL gala, Subban walks out to a sold out audience – a sea of fans wearing his prominent Montréal Canadiens #76 jerseys. During the special, P.K.’s personality shines through like never before as he reveals some of the good-natured Twitter ribbing he faced from fellow NHL players about the trade. Montréal offers him a warm sendoff, but not before P.K. shows the many special ways he has worked to help the Montréal Children’s Hospital foundation.

P.K. Subban is an all-star NHL defenseman, formerly with the Montréal Canadiens and now for the Nashville Predators, doubling as a philanthropist, entrepreneur and style icon. His passion for supporting the Montréal Children’s Hospital has made him one of the city’s most admirable mentors. His recent $10 million dollar donation was the largest donation by any Canadian athlete to date.