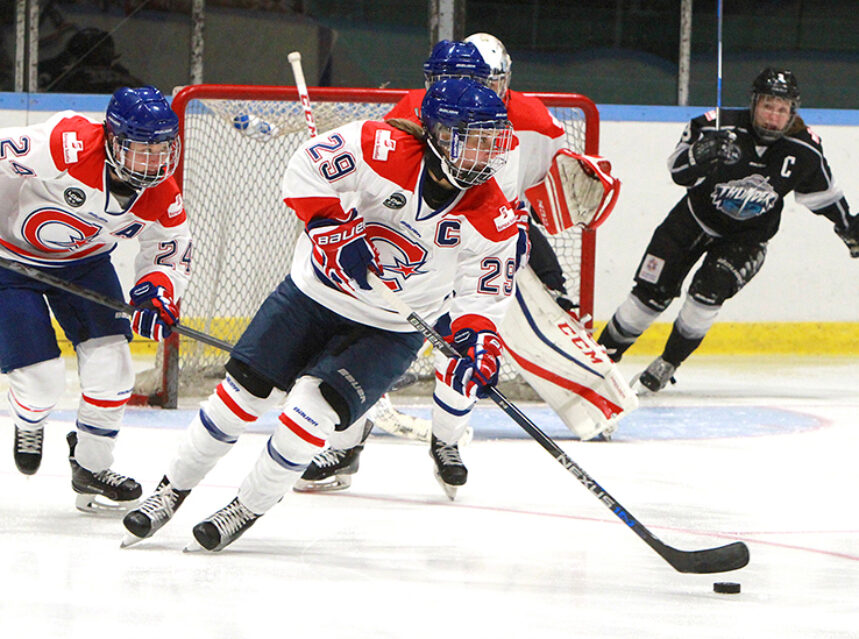 The puck has dropped on the CWHL’s 10th season and Les Canadiennes won their first two games against the Brampton Thunder this past weekend. With a 5-2 win on Saturday and 3-2 win on Sunday, the team is off to a great start.

Montreal took control of Saturday’s game from the beginning, with Kim Deschenes scoring the first goal at 2:38 into the game and Sarah Lefort scoring the 2nd goal at 13:14 – but Brampton put themselves up on the scoreboard with Laura Stacey scoring one minute later ending the period 2-1. Brampton came into the second period showing Montreal they weren’t going down without a fight and at 9:04 Laura Fortino scored to tie the game. But Les Canadiennes brought it on during the third period. Goalie Charline Labonté kept Brampton out of the net and the team controlled the ice with goals from Ann-Sophie Bettez, Caroline Ouellette and Jordanna Peroff.

On Sunday Montreal controlled the first period with goals from Sarah Lefort and Ann-Sophie Bettez and then well into the second period when Marie-Philip Poulin scored the third goal. But Brampton’s Jamie Lee Rattray put one past Labonté with a goal at 19:21 into the period and the third period was scoreless until 14:29 when Jess Jones of the Thunder scored, but Les Canadiennes were able to hold to their lead and win the 2nd game 3-2.

Congratulations to Marie-Philip for her 50th career goal in the CWHL! Next games: Home openers at the Étienne Desmarteau arena Saturday Oct. 22nd and Sunday Oct. 23rd. Go to: www.cwhl.ca/view/lescanadiennes-en/tickets-349 for tickets and information.