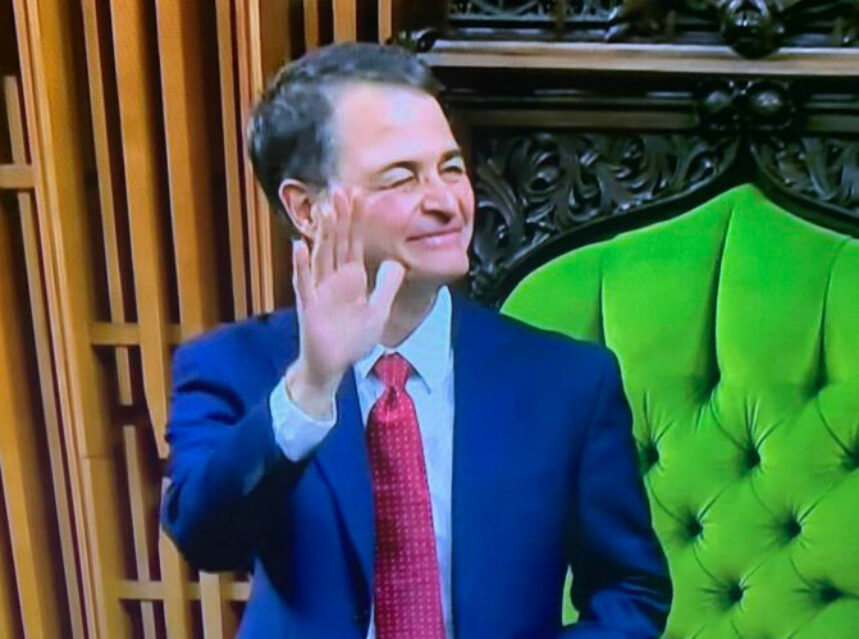 Liberal MP Anthony Rota who represents the riding of Nipissing-Timiskaming will preside over the new Parliament in Ottawa, beating out fellow Liberal and previous House of Commons Speaker Liberal MP Geoff Regan from Halifax West, along with three other non-Liberal candidates.

It was all smiles as both Prime Minister Justin Trudeau and Conservative Leader of the opposition Andrew Scheer practically carried out the tradition of ushering (in this case dragging and pulling) the new house speaker to his chair.

Prime Minister Trudeau apologised to the new Speaker of the House of Commons, MP Anthony Rota, implying that maybe he was a reluctant candidate but “I’m afraid this house needs you.” PM Trudeau then went on to say, “While I know though, that every member will strive to insure constructive and therefore productive debates, there will be times where our differences will get the best of us and have us get carried away and we will then look to you Mr. Speaker, Parliament’s referee to keep us in line. I know you to be uniquely qualified to assume this role, a belief obviously many of our colleagues in this house share as well. Mr. Speaker once again I want to give you my deepest congratulations on your election. You are more than fit for this honour thank you Mr. Speaker, and good luck.

MP Anthony Rota addressed the house saying “I’d like to turn my humble acknowledgements to the house for the great honour you have been pleased to confer upon me by choosing me to be your speaker.” he went on to say, “I’m here to serve you and make sure that everything runs well for all of us, so that we can conduct the business of Parliament and make sure that it works well.”

Rota won out over two Conservative MPs — Joël Godin, who represents the Quebec riding of Portneuf-Jacques-Cartier, and Bruce Stanton, representing Simcoe North in Ontario — as well as Ontario NDP MP from Carol Hughes, from Algoma-Manitoulin-Kapuskasing.

The announcement today preceded the throne speech to the senate by Governor General Julie Payette. The throne speech lays out the issues the new minority government will focus on and how they will achieve their goals in the upcoming term.