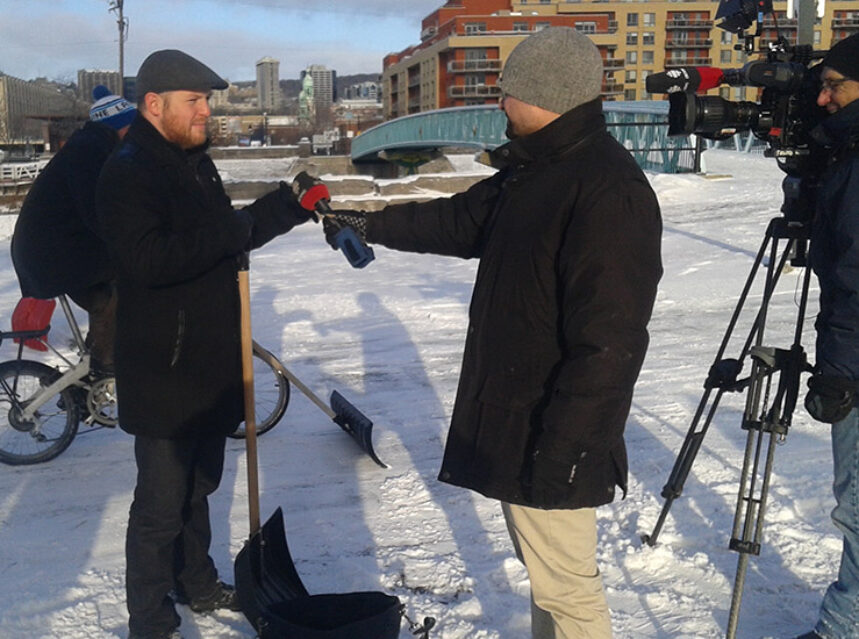 Some thirty bike advocates turned out on Friday morning near Atwater Market to demand that Montreal’s Lachine Canal bike path be cleared of snow in winter. They were joined by elected officials including Southwest borough mayor Benoît Dorais, together with opposition city councillors Craig Sauvé and Marianne Giguère. The group called on Federal Environment Minister Catherine McKenna and Montreal Mayor Denis Coderre to work together on ensuring that the bike path remains open year-round.

The 14.5kmLachine Canal bike path is on federal land but responsibility for clearing the snow would fall to four boroughs of Montreal: Lachine, LaSalle, Southwest, and Ville Marie (downtown).

“Minister McKenna, who is in charge of Parks Canada, said last spring that what is possible will be done so that everyone can ride the bike path” said Renaud Gignac, one of the co-organizers of Friday’s event. He adds that “the Southwest borough has unblocked a budget of $100,000 for snow clearing this winter. The City of Montreal and Parks Canada have only to agree on the technical details to clear the bike path this winter!”

A “pellete-in” is a gathering of cyclists who demand that a cycling facility remain accessible in winter. To do this, volunteers symbolically clear a stretch of bike path. Montréal has regularly been the theatre of such “Pellete-in”s since the 1970s with Le Monde à Bicyclette and Robert “Bicycle Bob” Silverman.

TV host and lecturer Yvan Martineau was there; he uses his bike all year round, snow or not. Martineau wonders why “at a time when (governments) are telling people it’s important to be active and keep fit, how is it that this bike path–a direct link for workers to downtown–is not yet cleared while demand has been there for a long time?”

“We have been working hard on this since January, trying to get government officials to clear this bike

path,” said Dan Lambert of the Montreal Bike Coalition. His sentiments were echoed by Jonathan Théorêt of the environmental group, GRAME.  Théorêt thought he had obtained assurances from local governments on this in 2014.

The Lachine Canal bike path, which dates from 1978, is often considered the first bike path opened in

Canada, with close to 1 million people using it each year from April 15 to Nov. 15. The bike path is also the only major bike link from Lachine to Old Montreal. Ongoing highway construction work with the Turcot project means years of constant traffic congestion between Lachine and downtown, but winter cyclists do not have the option of using the bike path.

hosting the fifth annual Winter Cycling Congress, supposedly a chance for the city to show-off how much importance it places on winter cycling.