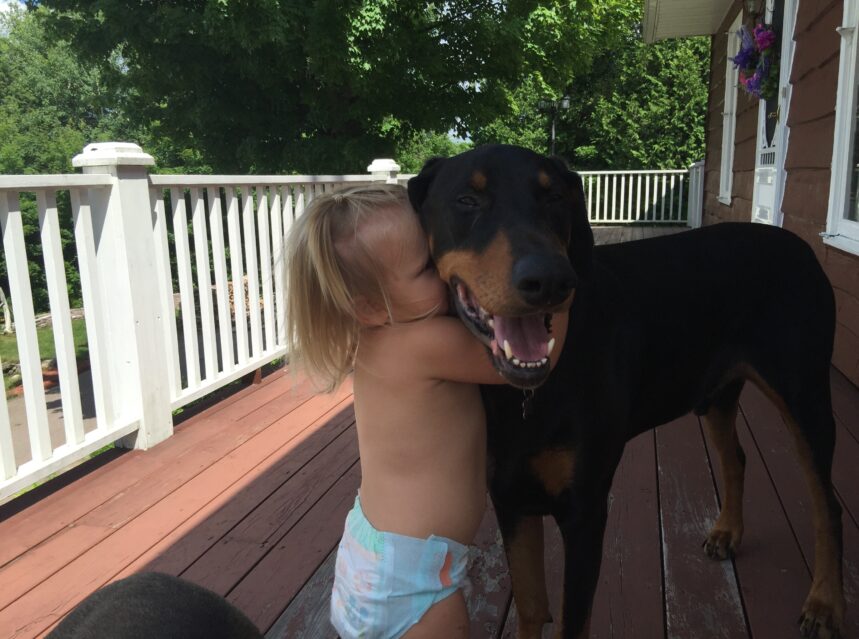 Ella Correia, a spunky two year old, has a best friend who she calls ‘Dougy-Doug’. Doug is a 6 year old King Doberman and a little bit bigger than Ella, to say the least – but Doug adores Ella and is really good with her.

“He is so gentle. Like a big fluffy statue,” her mother Jillian said. “She sits on him, she hugs his neck… even hanging on with her feet off the floor. She covers him with blankets and he honestly enjoys every minute of it. Often he’ll just lie his head on her lap and she pets his ears. He lets her do anything she wants to him.”

Ella often says ‘I love you Dougy-Doug’ to him, stringing together a sentence when a typical two year old’s vocabulary is about 100 words.

How does Doug feel about Ella?

“Doug absolutely loves her back. Every morning he waits for her to go find him on his bed where she sings him a song and says good morning. She is definitely his go-to person.”

What are some of the special things he does?

“He sings when the kids play harmonica!”

What are his favorite toys?

“Doug is not much of a toy dog. He loves bones though, so we give him those big white raw-hides and that’s what entertains him. He also loves running in the yard with the boys… they’re super heroes and he’s the villain,” Jillian says and laughs.

‘Dougy-Doug’ is clearly a true gentle giant – and a royal King in Ella’s eyes.