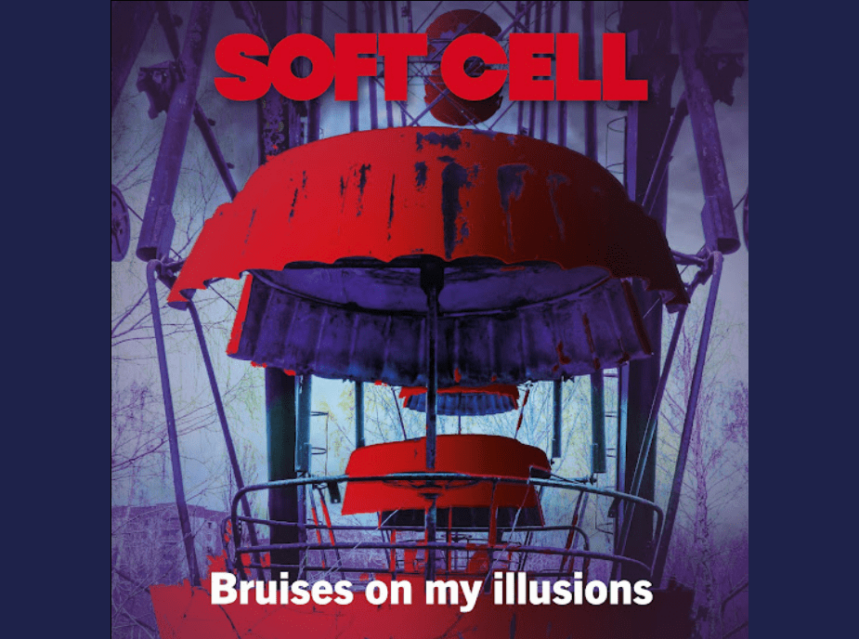 Toronto, ON (October 7, 2021) – It’s been two decades since Soft Cell last released an album, but the influential synth-pop duo still provoke a huge amount of public fascination. News of their upcoming fifth studio set ‘*Happiness Not Included’ sparked international attention from the likes of Clash, NME, Pitchfork and The Quietus – in the process igniting a platform for them to add to their previous achievements: 25 million sales, six UK top 10 singles and a BRIT Award.

‘Bruises On My Illusions’ possesses a baroque-meets-gothic ambience, with Dave Ball’s ominous yet dramatic synths supplementing the mood cast by Marc Almond’s evocative lyricism. Despite the pessimistic poetry of his words (“When every day is coloured in Soviet greys of sorrow / I’ll hold on to my blues”), the overarching message is to keep striving for brighter times ahead.

As Marc Almond explains, “‘Bruises On My Illusions’ is a mini film noir Soft Cell story about a disillusioned character with everything against him or her who still has hope for a better future, despite the odds. A darker ‘Bedsitter’. Dave’s ominous yet punchy defiant chords inspired the song.”

Dave Ball adds, “’One of our darker cinematic pop moments with a classic Marc Almond lyric”.

Bonus tracks on the single’s physical formats include ‘Bruises On My Illusions’ remixes from Dave Ball’s ‘other’ band The Grid, plus Manhattan Clique, a ‘Nighthawks’ remix courtesy of Throbbing Gristle legends Chris & Cosey and extended versions of album tracks ‘*Happiness Not Included’ and ‘Heart Like Chernobyl’ plus bonus track Vapourise.

‘Bruises On My Illusions’ amplifies the anticipation for the release of ‘*Happiness Not Included’ on February 25th. It’s rich with the traits that fans first adored Soft Cell for: that distinctive and striking balance between light and shade, hope and despair, the personal and the universal. Changing perceptions of the passing of time are a recurring theme throughout. At various points, Almond explores the disappointment of a future that never materialised, reflects on his experiences at The Factory, expresses disillusionment at the modern media landscape, and comes to accept that life isn’t eternal.

Both ‘*Happiness Not Included’ and the CD and 12” formats of ‘Bruises On My Illusions’ are available to pre-order here.

The impetus for making a new album started with the phenomenal “final” show at The O2 in London in 2018. Emerging to a rapturous reception at the sold-out 20,000 capacity arena, Soft Cell’s extensive set covered all of the hits and fan favourites: ‘Tainted Love’, ‘Say Hello, Wave Goodbye’, ‘Torch’, ‘Memorabilia’ and many more. What they had planned to be the end instead became a brand new start.

‘Bruises On My Illusions’ 12” vinyl tracklist: