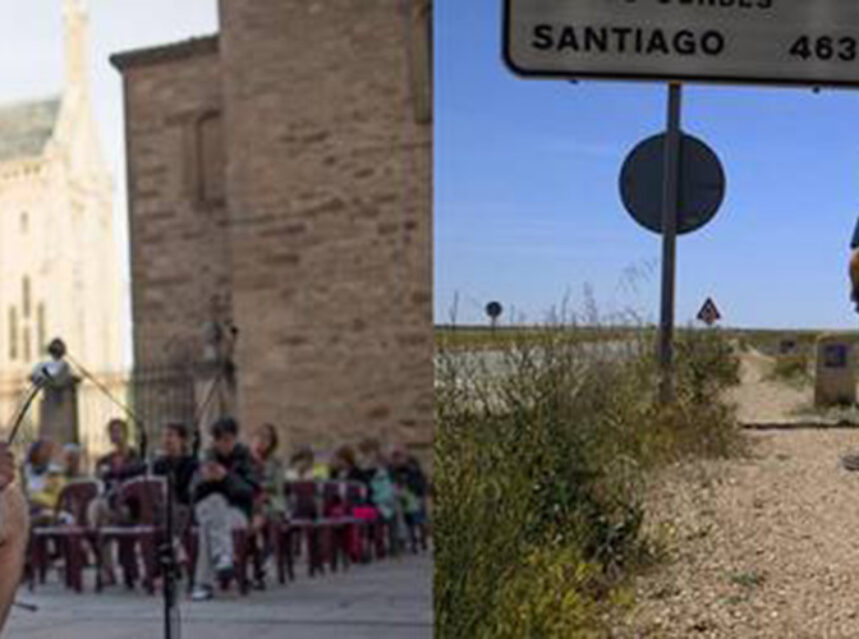 Strangers on the Earth – As has happened on every pilgrimage since Chaucer, Strangers on the Earth encounters a disparate array of characters – lovers whose entire relationship plays out in a matter of a few weeks on the walk, self-styled philosophers, wounded people recovering from illness or mourning the loss of loved ones – all of whom traverse the storied paths of Europe’s famed Camino de Santiago. Over goat-skins of wine, we hear their thoughts on life, love, the nature of reality and the existence of a higher power.

With a title taken from the New Testament, Strangers on the Earth follows the remarkable, almost foolishly-ambitious mission of cellist Dane Johansen. At first a pilgrim among many, Johansen’s singular drive to walk the 600-mile, month-long journey carrying his cello on his back sets him apart. His purpose: to perform and record Bach’s Cello Suites in 36 ancient churches along the Camino.

Johansen’s stumbling, recorded takes and retakes of his narration mirror the unexpected difficulty of not just his own challenge, but that of every pilgrim in the film who seeks personal meaning from the Camino. The musician, who foresaw the walk primarily as a recording project, is surprised by the demands of the hiker/performer lifestyle that greet him daily as he arrives exhausted at each church only to find it filled with an expectant audience. Along the way, his take on Bach’s Cello Suites provides the film’s own moody and contemplative soundtrack.

The subject of previous documentary works like Walking the Camino and the Emilio Estevez/Martin Sheen feature narrative The Way, Tristan Cook’s acclaimed Strangers on the Earth is an all-new experiential piece of filmmaking – marking a musical artist’s personal journey against a universal backdrop.

“In making the film, I wanted to focus heavily on the universal story of the pilgrim, on the common threads amongst this group of people all moving in the same direction,” says director Tristan Cook. “What’s interesting about the Camino is that it can take on whatever meaning today that we, as pilgrims, apply to it: from its days as a pre-Christian trade route, to its religious heyday in the Middle Ages, all the way to the present and the tourist industry atmosphere that currently surrounds it, the Camino has always been a very potent idea, a conduit for meaning for a large variety of people.

“Over 200,000 people walk the Camino every year now. It may just be a line on a map that connects point A to point B, but this particular path is loaded with meaning and metaphor, and that makes it a great cinematic subject.”

Opens for a one week engagement beginning April 22, 2017