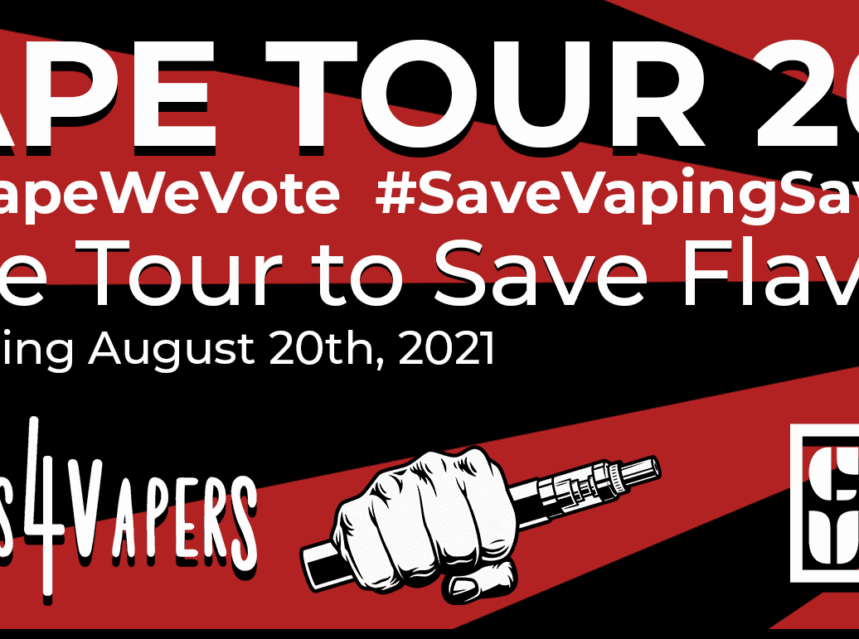 TORONTO, ON, Sept. 13, 2021 – The biggest mobilization of Canadian vapers continues this week with a blitz through Toronto and the Greater Toronto Area that will include a vigil for the hundreds of Canadians who have died from smoking-related diseases since the start of the election campaign.

The tour encourages vapers to speak out against the proposed Health Canada regulations that will ban all flavours, except tobacco, mint and menthol. Health Canada says flavoured vaping products are highly appealing to youth, and this is why they are recommending a ban to reduce the temptation.

The tour also is intended to educate non-vapers on the realities of vaping as a tobacco harm reduction tool.

“We’ve been on the road for almost a month. We felt we needed to come back to the GTA to push home our message of tobacco harm reduction. The Liberal government will have no choice but to hear our voices. In the past, we have been silenced and marginalized. This tour will show candidates in this election that vapers will no longer be ignored. This is the fight for our lives,” said Maria Papaioannoy, spokesperson for Rights4Vapers one of Canada’s vapers’ rights organizations.

Rights4Vapers say vaping is a proven less harmful alternative to smoking, while Public health authorities around the world have made it clear that vaping can be an effective tool to help smokers quit smoking. But only if the right regulatory and societal frameworks are in place.

“If regulated appropriately vapour products have the potential to help millions of smokers quit smoking. Isn’t this what the government wants?” said Ms. Papaioannoy. “Instead, the Liberals are threatening to remove flavours from the market. If the government is successful with this draconian regulation, it will drive thousands of current vapers back to smoking and stop millions of smokers from trying vapour products.”

Flavours are an important component to the vaping experience for adult smokers. Flavours help smokers migrate from traditional cigarettes to vapour products. In 2019, Parliament conducted hearings on amendments to the Tobacco Act (Bill S5). Experts told the federal government that flavoured vapour products are important. It’s time that all governments listen.

“Since the start of the election over 3000 Canadians have died from smoking related illnesses. No one has died from vaping. We want to honour the lives of those who died with a vigil in downtown Toronto. Who is to say that with progressive regulations, truth and science based information, and accessibility to vapour products, some of these Canadians may still be alive today,” said Ms. Papaioannoy.

Vapour products are the best hope for hundreds of thousands of Canadians who smoke and are looking for an alternative to cigarettes. Earlier this year, Public Health England released its latest review of vapour studies. It found that “the best thing that a smoker can do is to stop smoking completely and the evidence shows that vaping is one of the most effective quit aids available, helping around 50,000 smokers quit a year.”

According to research published by the Consumer Choice Center, there are upwards of 1.5 million adult Canadian vapers in Canada. Approximately 955,000 of those adult consumers currently use flavoured vape products. Rights 4 Vapers say a full ban on vaping flavours would likely push most of those consumers back to smoking.

Vape Tour 2021 will reach out to the forgotten 1,250,000 Canadian vapers. More and more regulations at both federal and provincial levels are threatening the access, availability, and affordability of vapour products. Vape Tour 2021 will bring the truth about vaping to towns and cities across Quebec and Ontario and mobilize vapers. It’s time to save vaping. It’s time to save lives.

Event Schedule:
What: Vigil for those who have died from smoking related illnesses
When: Thursday September 16
Time: Begins at 6:30 p.m.
Where: March starts at Yonge and Adelaide and will culminated in a silent vigil at Yonge and Dundas Square