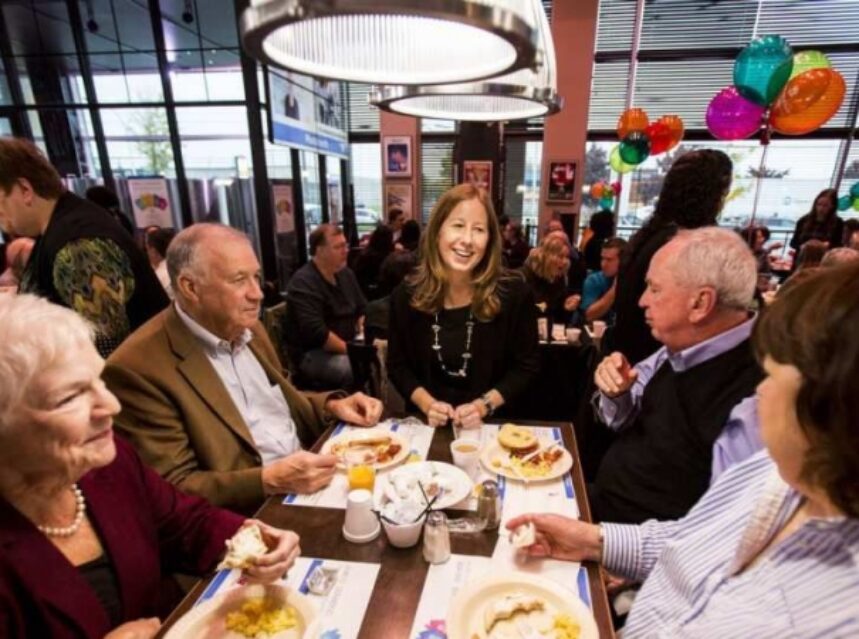 “It all starts with breakfast!” was the theme for the launch of West Island Community Shares 19th annual fundraising campaign held on Friday, October 21st. More than 500 people came to the first edition of the community breakfast held at 3 Brasseurs Pointe Claire.

“I am ecstatic that so many people joined us at the breakfast because they live or work here and want to make a difference in our community,” said Leanne Bayer, Executive Director of West Island Community Shares. “I am inviting all individuals and companies who care about our beautiful community to support us too. There is strength in numbers and together we can make a difference.”

Ms. Nada Nasreddine, President of West Island Community Shares, thanked the event sponsors. “When we asked 3 Brasseurs about the breakfast, they immediately and graciously offered to hold it at the restaurant at no cost.  West Island IGA stores didn’t hesitate either when we asked them to donate the food. Thank you so much to them and to all the sponsors who made the breakfast possible.”

West Island Community Shares is a fundraising organization for 40 local community groups. 1 in 5 West Islanders turns to these groups for help each year. Some are living in poverty. Others need help coping with a cancer diagnosis, depression, bullying, substance abuse and more.

“Volunteers from the Mission were delivering a food basket to the family. When they arrived, two little children were anxiously waiting to see what goodies would be in the basket,” said Ms. Bayer.  “‘Daddy, we have cereal!’ they shouted when they saw a box of cereal that any of us might find in our cupboard on any given week. Then, they saw the carton of milk. ‘Daddy we even have milk to go with the cereal!’ they shrieked before running off to the kitchen to eat cereal with milk”

Donations to West Island Community Shares can be made on its secure webserver at www.communityshares.ca 100% of donations will go directly to the community groups because corporate partners cover operational costs. The West Island is the only community in Canada to sustain this model for more than 19 years.

West Island Community Shares is a fundraising organization that currently supports for 40 local community groups. These groups provide frontline services to thousands of residents whose needs range from support to cope with poverty and food insecurity to cancer, troubled youth, substance abuse, mental illness and more. Since 1998, it has raised and distributed more than $12 million to local community groups.  West Island Community Shares’ model is unique because it distributes 100% of donations received to the groups it supports. It is the only not-for-profit in Canada to implement and sustain this model for 18 years. This is made possible by the following corporate partners that cover its operational costs: Pfizer Canada, Merck, Tenaquip Ltd., Telus, Pharmaprix, Avon Canada, Groupe Jean Coutu, West Island Ford Lincoln, Roxboro Excavation, the Spinelli Employee Fund, BDO, Bromelin People Practices, Construction Jean Houde, Groom and Associates, the Montreal Marriott Airport In-Terminal Hotel, NAS, Novartis Pharmaceuticals Canada Inc., Otsuka Pharmaceutical and Pharmascience.