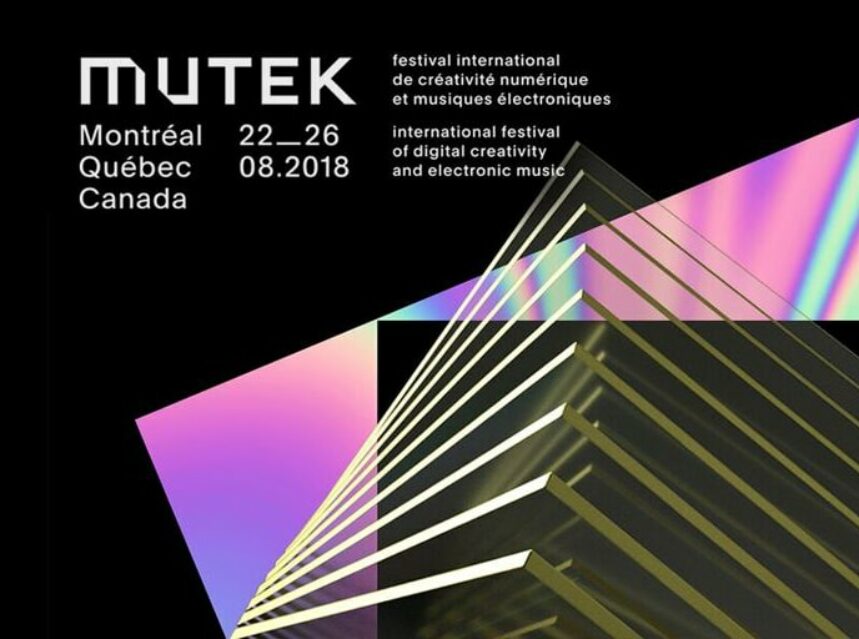 This upcoming Wenesday, one of Montreal finest Music & Arts festival will spread all across the city for another out-of-this-world celebration of digital creativity and electronic music.  On August 22, MUTEK is coming back for a 19th edition that’s offering a impressive line-up- Featuring performances from Machine Woman, Lawrence English, Pye Corner Audio, Caterina Barbieri, Floorplan, Lanark Artefax, JASSS and about a hundred more

For those who don’t know the Infamous festival, MUTEK is an international 5 day annual event that take over the city best scenes and locations for some of the most mind-blowing audiovisual experiences you could imagine !

After humble beginnings, it now attracts more than 50,000 people that crowds into venues around downtown every year to experience the beats and creations of renowned artists, trendsetters, and emerging superstars.

Reuniting more than 150 artists working at the vanguard of music and art that intersects with technology. MUTEK is a part of an international community that has held events around the world with the purpose of creating a hub for digital music lovers. During the day, people can join in workshops, showrooms, and discussions to exchange ideas before indulging in the night’s electronic mixes and visuals.

You see, while most music festival call themselves Music & Art festival – Mutek’s Art is quite predominant and his held in high esteem –  It’s a Arts and Music Festivals –  Actually  it’s an Arts, music and technologies festivals.

From unique new instruments, to the finest audiovisual accompanied by the smartest and most impressive display of projections, light and laser. Mutek is a breathtaking adventures of sensorial experiences that won’t leave you disappointed.

This year’s edition hasn’t yet started officially but it’s already proving to be one for the book. Presenting more than 120 performances coming from 27 countries from around the globe – As usual, half of the performances coming from a pool of talented Canadian and Québec-based artists, underlining the festival’s strong commitment to positioning the local in an international context –

As the founder explained, the original intent was to put local creator in dialogue with world’s respected Artist, or too quote ” Put Montreal on the Map ” –

that being said, this edition adds another focus.  “This year, MUTEK is proud to raise the profile of women in digital arts and electronic music by hosting a lineup of outstanding Canadian female performers—rising stars on both the Montréal and international scenes.” — Jennifer-Ann Weir, General Director of MUTEK

Presenting a two day symposium called Keychange Dedicated to empowering women in digital arts and electronic music in order to enlighten, embolden and contribute to the current cultural shift around inclusivity and gender issues.

Moreover, this year performance program is achieving a total gender parity for the first time – something we can’t acclaim enough ! This year’s highlights aren’t stopping here as this edition counts as the largest and richest in MUTEK history.  20 Canadian, 18 North American and 16 world premieres: for a record breaking number of 52 never-before-seen performances.

With so many exciting performances and multiples way to experiences the festivals here are few events to keep an eye out for !

2- This year however will include, for the very first time, a major outdoor event in the Mile-Ex district. The Hors Circuit Presented by Red Bull Music on Sunday – August 26 . The site will be outfitted with a bar and food, along with a pop-up record fair.

Running parallel to the Nocturnes at the SAT from Wednesday through Saturday, in the immaculate black box setting of the Studio Hydro-Québec, the Play series highlights avant-gardist and emergent creations, spanning audiovisual ingenuity, live coding, noise, drone, cheeky situationist presentations, quirky pop and unexpected rhythmic excursions. This series is FREE.

5- If that’s not enough – Métropolis Series 1 & 2 – will be, for first time in many years, activating the M2 (the old Savoy Room), the second stage at MTELUS

The Métropolis series is taking place in the newly re-christened MTELUS theatre Friday and Saturday, maintains its focus on big room sonics, current trends in techno and house music, and big names.

As always, alongside the music there is an exciting variety of audiovisual events

The Society For Art and Technology (SAT) hosts this edition’s Nocturne series from Wednesday to Sunday. Designed to showcase a panorama of styles and singular works, each night pulls a particular thread through each program.

Find tickets and the perfect passport for MUTEK Here