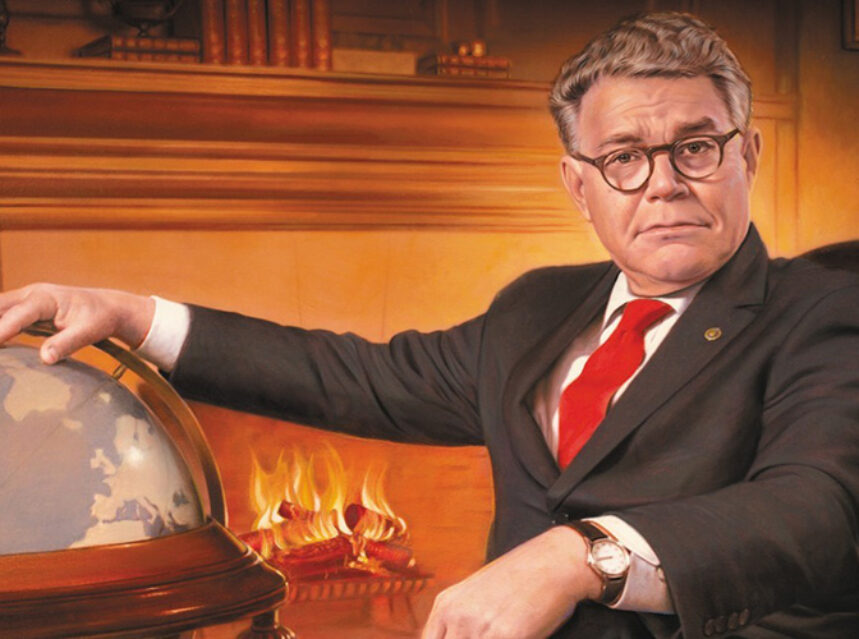 This volume, which was published 15 years ago, covered Johnson’s 12 years as Senate Majority Leader from 1948 to 1960, and how he used that esteemed, powerful position to its fullest extent – with a great deal of phone calling, cajoling and even bullying that were his trademark characteristics thrown into the mix – to get the legislation and government programs that he believed in get passed into law by the Senate.

Although he is no master of this much revered legislative body like LBJ, the SNL writer/comedian-turned-junior senator from Minnesota has carved out an impressive track record since his first election to the U.S. Senate in 2008, as a true progressive politician whose main aim is to represent the people of Minnesota and fight for legislation that will benefit them and the American people as a whole.

…And when you come to think of it, with the acrimonious nature that has befallen both houses of Congress since 2009 (and has ramped up even considerably since the election of Donald Trump to the presidency last November), Franken has truly become a “giant of the Senate” (although he probably meant it in a more jokingly, rather self-deflating manner).

The book chronicles Franken’s career from comedy to politics, first as a writer/performer for SNL during the 70s and 80s, to radio show host and satirist (as the liberal equivalent and antithesis to Rush Limbaugh), to best selling author, to finally political activist and U.S. Senator.

Sparing no details, Franken gives the reader a clear, insightful look at how Minnesota politics works (especially all the “Bean Feeds” he had to attend as part of his first campaign to get the Democratic nomination for the Senate); how his first campaign against incumbent Republican senator Norm Coleman was a nasty, name calling campaign that compelled his wife Franni to do a TV campaign spot in which she confessed about her bout with alcoholism (and went through a series of recounts and court challenges before Franken was declared the winner and finally sworn in … in the summer of 2009); the ins and outs of being a U.S. Senator (in which he learned the hard way of how NOT to give his staff credit in public for a job well done); and the arduous process of trying to pass or defeat a piece of legislation, and all the loopholes and roadblocks that go with it.

And through it all, Franken tells his story with a great deal of rationality, knowledge and of course, generous doses of his somewhat understated, yet always pointed sense of humour (for example, here’s what he has to say about how to be an effective Democratic senator: “…you have to be able to hold two inherently contradictory ideas in your head at the same time without suffering a cerebral hemorrhage.”).

Of course, he saves his best venomous jabs for his Republican opponents in the Senate chamber. Although he admits to love/hate relationships with current Attorney General Jeff Sessions and Senate Majority Leader Mitch McConnell, he lobs his most pointed, venom laden arrows for Texas senator (and defeated presidential candidate) Ted Cruz, who gives the impression that he has been a constant thorn in the side of not only Franken, but practically every Senator on both sides of the chamber (especially due to his liberal use of the word “sophistry”).

Here’s how Franken sums up the ordeal that is working with Ted Cruz: “Ted Cruz isn’t just wrong about almost everything. He’s impossible to work with. And he doesn’t care that he’s impossible to work with. And here’s why, even when the choice was between Ted Cruz … and Donald Trump …, establishment Republicans couldn’t bring themselves to rally behind Cruz. Even if you like what he stands for, the most he’ll ever be able to accomplish is being an obnoxious wrench in the gears of government … Real senatoring requires that you build productive relationships with your colleagues. And Ted just isn’t that kind of guy.”

Al Franken: Giant of the Senate is a refreshing political memoir that takes out all the stuffiness that goes with a lot of books of that genre, and injects a great deal of honesty and humour that only an individual like Al Franken can offer. And with the U.S. and its government becoming more divisive than ever over the past decade and counting, we need more people like Al Franken (and behind-the-scenes political manifestos like this book) as an example of what an elected official should be like: taking his job with varying degrees of seriousness and humour, yet without losing sight of its original purpose of introducing legislation and passing laws that will benefit the people whom elected you to that governmental office, and to whom you swore to serve to the best of your abilities. So help you God.