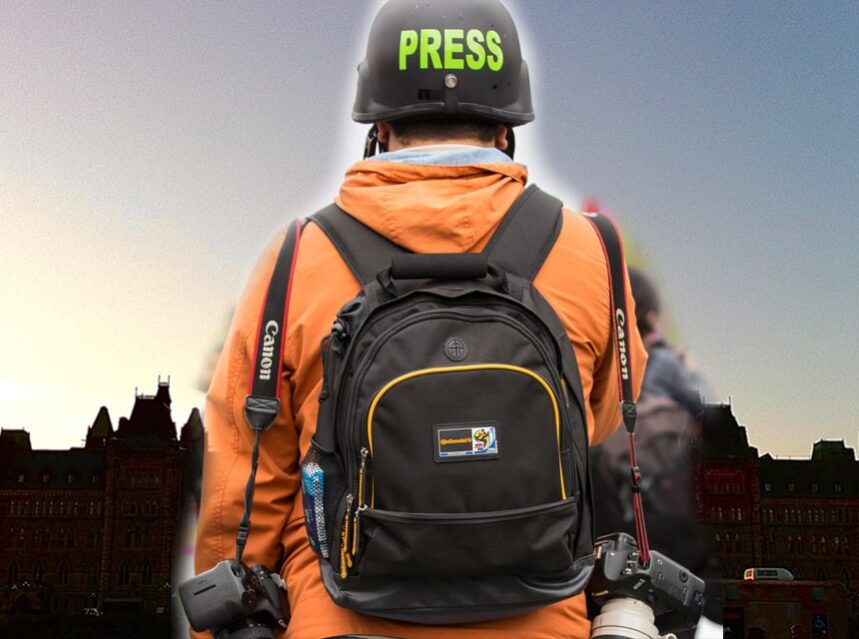 OTTAWA, ON, Jan. 28, 2022 /CNW/ – As thousands of Canadian truckers and supporters in the “Freedom Rally” are about to descend upon Parliament Hill to protest the federal vaccine mandate for truckers (and other agendas), the Canadian Association of Journalists (CAJ) is encouraging newsroom leaders to take preemptive action to ensure that the safety of journalists is protected in the wake of increasing threats made against reporters covering the ongoing trucker’s convoy.

This week, the CAJ says they have been alerted to several troubling incidents from journalists in the field. They say, “Journalists have received death threats littered with racist epithets. Others have been spat on and verbally and physically harassed. In another case, the windows of a CBC/Radio-Canada news cruiser were broken. The CAJ considers all of these actions unacceptable.”

On CP24 Thursday, field reporter Steve Ryan appeared to be harassed on live television but would not go into detail while the camera was rolling. He did tell CP24 that “several people kicked the tires on his vehicle while he was reporting from the gathering point at Vaughan Mills.”

CP24 also said “a Canadian Press photographer also reported being shoved and spat on by convoy supporters as he tried to cover the protest.”

“Without a doubt Canadians have the right to protest as a key component of our democratic process,” said CAJ president Brent Jolly. “Efforts to dehumanize and intimidate journalists from telling stories in the public interest, however, is antithetical to the very notions of ‘freedom’ that are being sought through this protest.”

CAJ describes how best to ensure the safety of journalists

As the convoy continues in the coming days, the CAJ encourages newsrooms covering this event to discuss how best to ensure the safety of journalists. Some suggestions to ensure the personal safety of reporters may include:

The CAJ encourages journalists looking for additional guidance to consult resources from the following organizations on covering protests: Committee to Protect Journalists, Society of Professional Journalists, the Poynter Institute, and the Dart Center for Journalism & Trauma.

“In light of the escalating tensions, we are encouraging reporters and newsroom managers to think of creative alternatives allowing coverage of the protest while protecting journalists being targeted by violence from being hurt,” said Jolly. “It is in times like these — when fringe groups, individuals, and rogue politicians threaten a free press — that citizens rely on us to do our jobs.”

The Canadian Association of Journalists is a professional organization with more than 1,200 members across Canada. The CAJ’s primary roles are public-interest advocacy work and professional development for its members.