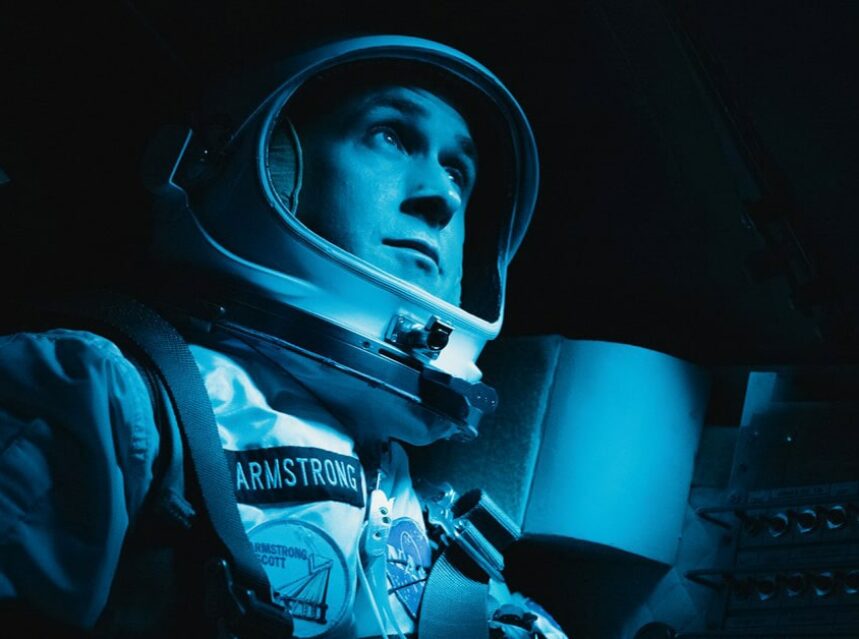 FIRST MAN – Next year it will be the 50th anniversary of the historic landing on the Moon by the spaceship Apollo 11, commanded by Neil Armstrong. “First Man,” directed by Damien Chazelle and written by Josh Singer is then an appropriate tribute to what could indeed be regarded as one of the most significant moments in the 20th century. Canadian Ryan Gosling delivers a solid performance as the somehow troubled Armstrong: the would-be astronaut had confronted a family loss, and at one point he wasn’t pleased with the job he had before he applied to be trained as an astronaut. Although he had been in the Navy, at the time when he started his training, he was a civilian. NASA had then opened the Project Gemini to civilian pilots as well.

The movie starts precisely with that sad personal loss episode and then it shows his training as a member of the NASA Astronaut Corps which he joined in 1962. Of course, a subject like this lends itself to a display of the patriotic fever in which some Americans are so prone to engage. However, Chazelle and Singer manage to keep that aspect under control: only the more or less logical reactions in the control centre, after the whole operation was successful, allowed for some American patriotism. One must remember that the lunar landing had happened in the middle of the Cold War, and in this space race at first, the U.S. had been left behind by the Soviet Union. The Apollo mission accomplished the goal set by President John Kennedy eight years earlier: “before this decade is out, [to be able] of landing a man on the Moon and returning him safely to the Earth.”

Although “First Man” is very descriptive of the Moon voyage itself and of a previous mission where some errors could have proven tragic for Armstrong and the rest of the crew if one has to underline one remarkable aspect of the movie I would mention its focus on the human aspect of Armstrong. He is masterly played by Gosling (talks of an Oscar nomination are already circulating), portraying very well his personal dilemmas, especially after the loss of a dear colleague. The tense dialogue between the astronaut and his wife Janet (Claire Foy) the night before the launching of the spaceship highlights the emotional elements involved. Janet, in fact, forces Armstrong to talk to his children and explain to them –the best he can do considering they were still young kids– that this was a mission from which there were no assurances he would be back…

“First Man” is a movie apt to all audiences, those looking for some action in space will have its doses, while those trying to get some insight into the first man on the Moon would also have a good idea of what he could have undergone.

Feature image: Ryan Gosling could be a candidate for an Oscar for his performance in “First Man”