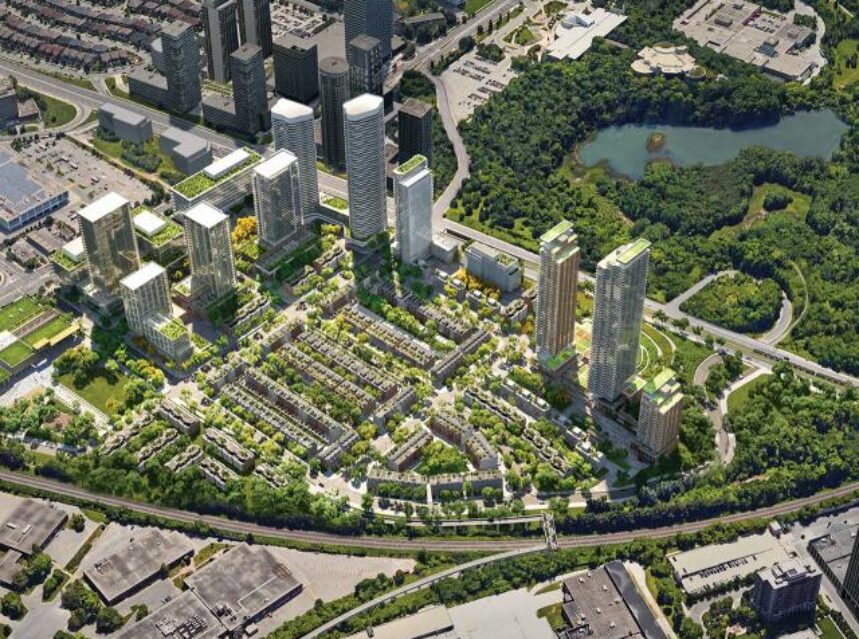 TORONTO, Oct. 24, 2017 — The intersection of Don Mills Road and Eglinton Avenue is a busy area, filled with communities, construction, shops and lots of traffic. With the upcoming Crosstown LRT that is set to open in four years, developers are re-imagining the area as a massive planned community with the “Wynford Green” master plan, a 60-acre development slated for the site where IBM Canada was originally built.

According to Urban Toronto, a proposal involved some shuffling around of the massing of the buildings, a tweaking of the design of the public realm, and adjustments to the incorporation of the heritage buildings in the development. Some reorganization of the street grid was done as a result of these changes. The majority of the main components remained the same, such as the community hub, retail Main Street, and low-rise townhouse development, with slight adjustments to their size and form.

Wynford Green is described as a “transit-oriented” development that would be comprised of residential, commercial and office buildings. It would also include low-rise townhouses, a series of pedestrian linkages, bike paths, new streets and tons of parks.

When completed, the area is projected to house roughly 10,000 new residents and workers and about six acres of new public space.

The Wynford Green team’s presentation also gave some insight into the block division and phasing of the project. Phase 1 includes the western portion of the site, encompassing the three new towers atop the heritage facade, the townhouses north of that, the reconstruction of the access road from Eglinton, and the construction of Celestica’s new offices at the corner of Don Mills and Eglinton. Phase 2 includes the mid-rise component at the south end of the site, the townhouses on the north half of the site, the new arena and community hub, and the new public park at the northeast corner of the site. Phase 3 includes the ‘Main Street’ retail promenade along with its bordering towers and mid-rise buildings, while Phase 4 would be the final mid-rise office building to the east along Don Mills Road.

Other suggestions include the addition of more mid-rise components, particularly to the north of the three towers on the site of the Parkin building, and further focusing on and developing the character of the various streets throughout the proposal. It was also suggested to create more meaningful gateways to the neighbourhood at its entry points.

Are you excited for this exciting change in the community or is Toronto already too congested?