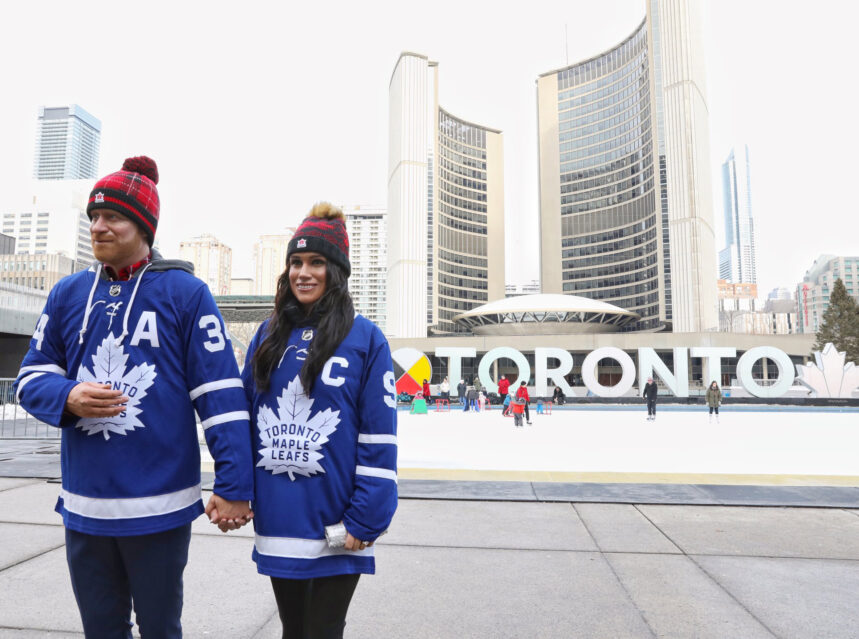 Today, they were first seen posing in Auston Matthews and John Tavares Leafs jerseys in front of the ice rink at Nathan Phillips Square. The post from the account reads:

Making this “power play” to #Canada has been pretty great so far! How do we look in @MapleLeafs blue? #royalstakethe6“

And then they were spotted by CityTV and the crafty @rotalstakethe6 account posted a message on Twitter saying “Hi @BTtoronto and @DinaPugliese! We dropped by, but no one was home. Thanks again for the invite. Hopefully, we’ll catch you next time! #royalstakethe6“

On both social media platforms the Royals are also captured in front of the CN Tower, Ripley’s Aquarium, and City Hall and they are also staged in an elaborate “Get Your Photo With Harry and Meghan” photo shoot at what appears to be Goodman’s LLP law firm. Another recognisable setting shows the Royals enjoying a pint at Steam Whistle Brewing.

At the moment no one knows the identity of who is behind this publicity stunts but it is a super marketing idea for highlighting Toronto’s and what inevitably sounds like Canada’s attractions.

The description of the account says, “Making a royal debut in #Canada🇨🇦 If you spot us on our travels, share your photos with #RoyalsTakeThe6!” So the implication is that the freshly waxed Royals will be popping up elsewhere, as they did again today.