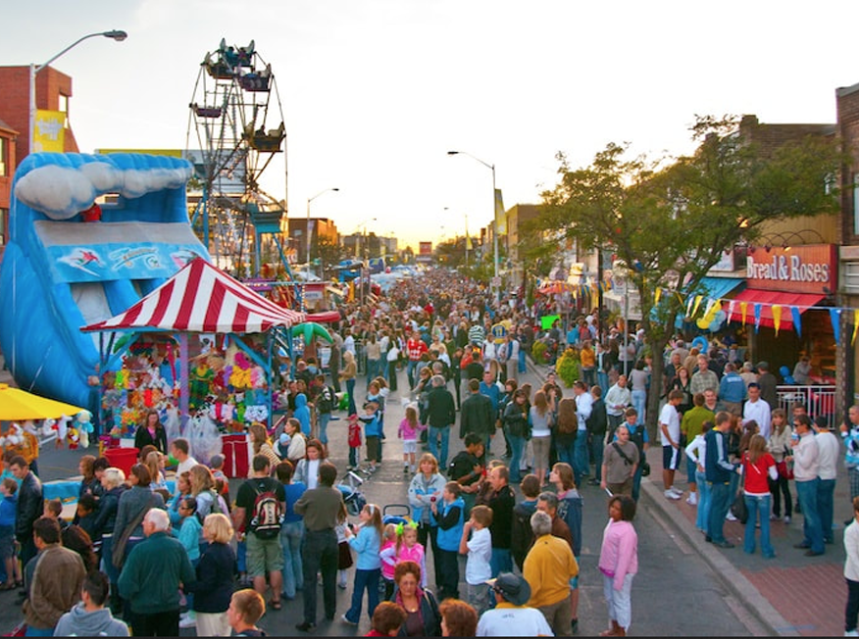 TORONTO, Sept. 16, 2022 – Experience Ukrainian culture and hospitality at its best at North America’s largest Ukrainian Street Festival. The over 900,000 visitors expected at this year’s Bloor West Village Toronto Ukrainian Festival will experience the true taste of Ukrainian culture and spirit in Canada. The festival will feature non-stop entertainment with Ukrainian performers from the Greater Toronto Area, Canada, the USA and Ukraine, including dancers, vocalists, musicians and a special youth segment.

Bloor West Village has been home to thousands of Canadians of Ukrainian heritage and over 4 million Canadians can trace their roots back to Ukraine.

This year’s theme is Gratitude

The theme for the Festival this year is Gratitude, a thank you and appreciation to Ukraine’s 70+ supporting governments from around the world. This year’s festival is the biggest production in its 26 year history and will feature some of the most immersive opportunities to learn about Ukrainian culture, Ukrainian history and the about unjust Russian invasion.

Let there be food

And of course there will be delicious Ukrainian fare. Vendor kiosks will offer authentic Ukrainian food and beverages, beautiful crafts and collectibles. Cultural pavilions will feature interactive cultural activities and displays of historical and contemporary interest.

Where exactly is the Bloor West Village Ukrainian Festival happening?

The Festival takes place on Bloor Street West between Jane St and Glendonwynne Rd and it is anchored with entertainment stages and art installations.

What is happening at the Bloor West Village Ukrainian Festival happening?

Dancers, musicians, singers, and bands perform non stop on both the Community Stage (at Runnymede Road) the Temerty Foundation stage (at Jane Street) and the Busker stage (at Durie Rd) for the three days of the Festival. There are plenty of varenky (perogies), sausages, and many other ethnic cuisine treats on the street. A refreshment garden offers samples of Ukrainian brands and entertainment throughout the day and evening. Children can enjoy interactive booths and a midway entertainment park. The cultural pavilions offer a window to appreciate Ukrainian culture and its contributions to Canada.

For the first time ever, the BWV Toronto Ukrainian Festival expands to a satellite location and presents Ukraine: Land of the Brave. A completely immersive 360-degree show that includes over 10,000 photo and video submissions, the new multimedia exhibit uses the full power of immersion to convey real-life emotional information about Russia’s violence to the international community.

Bonus content includes the Immersive Shevchenko: Soul of Ukraine exhibit. Tickets for this satellite event are available at the Lighthouse ArtSpace (link below).

The Festival kicks into high gear on Saturday morning at 11am with a March of Solidarity, featuring Ukraine’s supporting countries and community groups from High Park to Jane Street along Bloor Street West. This year’s festival marshal is Marcus Kolga, representative of the Estonian community, journalist and human rights activist. Mr Kolga will lead the March and lead our special guests to the Temerty Foundation Stage where federal, provincial, municipal and organizational leaders will bring greetings and formally open the BWV Toronto Ukrainian Festival.

Join the Artists with Ukraine concert on Saturday night at the Community stage where recent immigrants and refugee artists from other countries affected by war or conflict share the stage with local eastern European artists.

Our annual Film Festival returns this year with a brand new selection of films with themes such as fantasy, musical comedy to historical dramas.

Jerry Heil is the headliner on the Festival Stage

On the BWV Toronto Ukrainian Festival Temerty Foundation Festival Stage the headline performer is Jerry Heil. Yana Oleksandrivna Shemaeva, known professionally as Jerry Heil, is a Ukrainian singer, songwriter, and YouTuber. Heil began her career after launching her YouTube channel in 2012, publishing vlogs and musical covers. Heil began her professional music career in 2017, releasing her debut extended play De miy dim with Vidlik Records. She later released the single “#OHRANA_OTMENA” in 2019, which became a top five hit in Ukraine. Her debut studio album #YA_YANA was later released in October 2019. Since beginning her YouTube channel, she has accumulated more than 34.9 million views, and 193 thousand subscribers.

Seeing is believing, through concepts of Time and Connection, designed by contemporary artist Ruslan Kurt, the BWV Toronto Ukrainian Festival presents the interactive art installations, “Doors” and “Brain Washing Machine”. The Door display provides an emotional connection to the lives of Ukrainians in war torn Ukraine and how the security of a door can not stop the effects of war. See this emotional exhibit at the Lighthouse ArtSpace before experiencing Ukraine: Land of the Brave (see link below). The Brain Washing Machine exhibit illustrates the effects of government controlled propaganda, government misinformation propagation and the eventual programming of its recipients.

We invite everyone to visit the largest Ukrainian festival in North America from September 16th through to Sunday September 18th. The festival is happening on Bloor Street West between Jane and Glendonwynne Rd. Become Ukrainian for a day!

As a result of the festival, Bloor Street West will be closed to all traffic from the east side of Jane Street to the west side of Glendonwynne Road – from Sept 16th at 9:30am to Sept 18th at 11:59pm.⁠