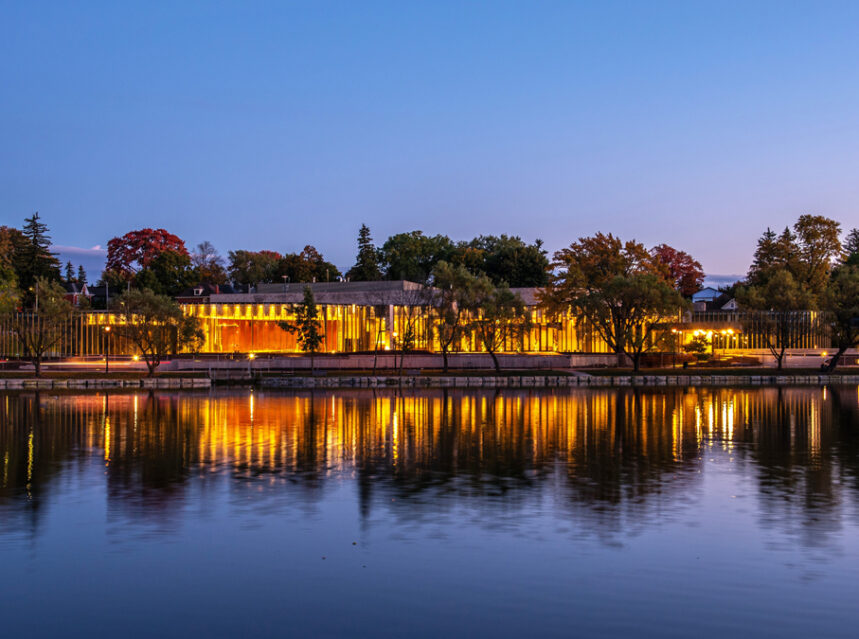 STRATFORD, ON, May 10, 2022 – The Stratford Festival today, announces the official opening of its glorious new Tom Patterson Theatre. After two years of waiting, the ribbon was finally cut this morning, in anticipation of the very first performance on stage, which begins at 2 p.m.

“We have waited years for this day to come. This gorgeous theatre has rested here like a sleeping beauty during this long pandemic,” says Artistic Director Antoni Cimolino. “Our architect, Siamak Hariri, has designed an inspiring space, which we believe will be the best theatre room in North America, a space worthy of the exceptional work that has always been produced in this well-loved theatre.

“Our dream from the start was to create a shining example of legacy architecture, and I am very proud to say that that dream is coming true. Already the Tom Patterson Theatre, and Siamak’s work, have been recognized with a global Architecture MasterPrize Award, a U.K Civic Trust Award and a Design Excellence Award from the Ontario Association of Architects. But this is just the beginning. The real life of this theatre begins this afternoon with the first performance of Richard III. I can’t wait!”

In attendance at the ribbon-cutting to make an exciting announcement about the culmination of the project’s $100-million Spirit of the Tent Campaign were the Campaign Co-Chairs, Dr. M. Lee Myers and Ophelia Lazaridis, who was also a lead donor to the project. With Honorary Chair Hon. Michael Meighen, they led the campaign beyond its goal, bringing in $105 million, enough to provide a substantial Endowment for the theatre’s future.

To cut the ribbon, they were joined by Antoni Cimolino, Executive Director Anita Gaffney, Architect Siamak Hariri, Board Chair Robert Gorlin, Past Chairs Carol Stephenson and Sylvia Chrominska, Stratford Mayor Dan Mathieson and Federal representative Peter Fragiskatos, Parliamentary Secretary to the Minister of National Revenue and Member of Parliament for London North Centre, on behalf of the Honourable Dominic LeBlanc, Minister of Intergovernmental Affairs, Infrastructure and Communities of the federal government. The governments of Canada and Ontario each contributed $20 million to the project.

“Cultural spaces like the new Tom Patterson Theatre Centre are at the heart of communities where people want to live, work and raise their families,” said Peter Fragiskatos, Parliamentary Secretary to the Minister of National Revenue and Member of Parliament for London North Centre, on behalf of the Honourable Dominic LeBlanc, Minister of Intergovernmental Affairs, Infrastructure and Communities. “Supporting theatres and the people, programs and festivals that use them drives tourism and helps create diverse and inclusive communities.”

Also in attendance was Colm Feore, star of stage and screen, who, in the title role of Richard III, will utter the first words in the new auditorium at the 2 p.m. performance: “Now is the winter of our discontent, made glorious summer by this son of York” – the same words that hailed the start of the inaugural Stratford Festival back in 1953, then spoken by Alec Guinness.

A time capsule was also dedicated, with a collection of items gathered by the Festival’s Archives and contributions from the federal government and the City of Stratford.

The event included a ceremonial fly-over by the Rambling Radials and a performance by the Stratford Festival Fanfares musicians.

Architect Siamak Hariri of Toronto-based Hariri Pontarini Architects, also spoke at the event. He has designed such acclaimed buildings as the inspirational Baha’i Temple of South America, in Chile, the Schulich School of Business at York University, which won the Governor General’s Medal in Architecture, and the striking Richard Ivey School of Business in London.

With inspiration taken from the glorious riverside setting, the Tom Patterson Theatre’s design features undulating walls of shimmering glass, hung with thin bronze mullions. The 600-seat auditorium features a unique elongated thrust stage and state-of-the-art production, lighting, acoustics and air handling systems, which create an ideal experience for both actor and audience. A terraced garden, which will grow to be a landmark in itself, stretches from one end of the site to the other.

The Spirit of the Tent Campaign for the new Tom Patterson Theatre was launched in January 2018 and raised a phenomenal $105 million. Approximately $72 million was required for land and constructions costs, with the balance being held in an Endowment to fund future programming and care of the new theatre.

While tickets are selling quickly, there are many opportunities to attend a production and to see the new theatre, including public tours.

Visitors can observe the new History Wall, and accompanying artwork by Lee Harper, an artist and Indigenous Health Promoter, who has created a beautiful tribute to the theatre and the land on which it is set.

This season will also see the new theatre’s Lazaridis Hall in full use for more than 150 events at the Meighen Forum, including concerts, talks, comedy, panels and special performances to entertain and to enrich the play-going experience.

Richard III is one of 10 productions at the Stratford Festival this season. Shakespeare’s All’s Well That Ends Well and Wole Soyinka’s Death and the King’s Horseman are also playing at the new Tom Patterson Theatre. The Festival’s other three theatres will be home to Hamlet, Chicago, The Miser, Little Women, Every Little Nookie, Hamlet-911 and 1939.

Tickets to productions at the new Tom Patterson Theatre – and all of the productions and events of the 2022 season – are available at stratfordfestival.ca or by calling 1.800.567.1600.