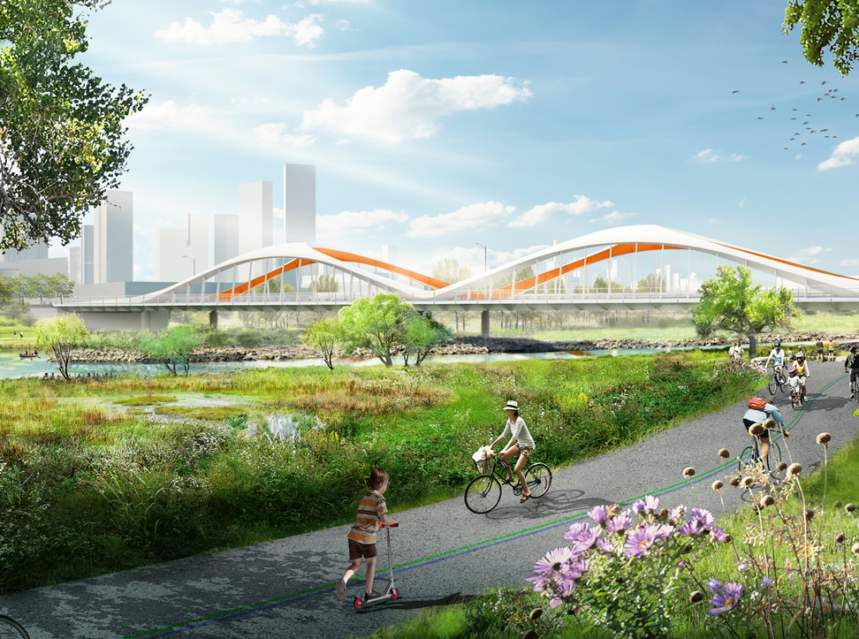 TORONTO, ON., August 8, 2020 — In a recent blog post by Waterfront Toronto revealed the new designs for four bridges that will help people and vehicles to easily navigate around a new island in the Port Lands connecting downtown Toronto to Villiers Island.

Two of the bridges will be on Cherry Street over the Keating Channel with one intended for pedestrians, bikes and cars, while a separate one will be a dedicated transit bridge. Another bridge will be located further south over the new river, in addition to a fourth bridge which will serve as an east-west crossing where Commissioners Street traverses the new river at Don Roadway.

The renderings were posted by Waterfront Toronto as part of the development plan for Villiers Island which will be an incredible new waterfront community with spectacular new parks, public spaces and ecological richness that will result from the naturalization of the mouth of the Don River. Projected to be completed by 2020 and surrounded by water on all sides, the Villiers Island precinct will provide a new a naturalized river valley at the mouth of the Don and will include new public spaces, roads and bridges and utilities, as well as structures to control water flow and manage sediment and debris.

Waterfront Toronto says they “asked our design and engineering team, led by Entuitive with Grimshaw and Schlaich Bergermann, to create iconic bridges to move transit, cyclists, pedestrians and vehicles across the new Don River. After much feedback and cross-discipline collaboration, the result is a family of bridges we hope will become new Toronto landmarks.”

The unique shapes of the bridges are posing a challenge for fabricators, Cherubini Metal Works, and they say they are being fabricated in two stages. The metal is being bent overseas at CIG in the Netherlands. According to Waterfront Toronto CIG are ship builders but they have the expertise needed to bend steel into the unique shapes needed for the bridge shell. Once complete, the bent pieces are sent to Cherubini’s facility in Nova Scotia. Waterfront Toronto says from that point the bridges are being assembled like puzzle pieces and then welded together. They will then travel to Toronto’s Port Lands via the St. Lawrence Seaway.

Incredibly, the first of these bridges, the LRT bridge for Cherry Street, will be barged from Halifax in one piece and placed over the Keating Channel with a crane.

An extensive use of colour (orange, red and yellow) on the interior will create a stark contrast to the white exterior and help to accentuate the bridges’ curves.

For more details on the bridge project and all of the plans for Villiers Island, visit portlandstoronto.ca and waterfronttoronto.ca.