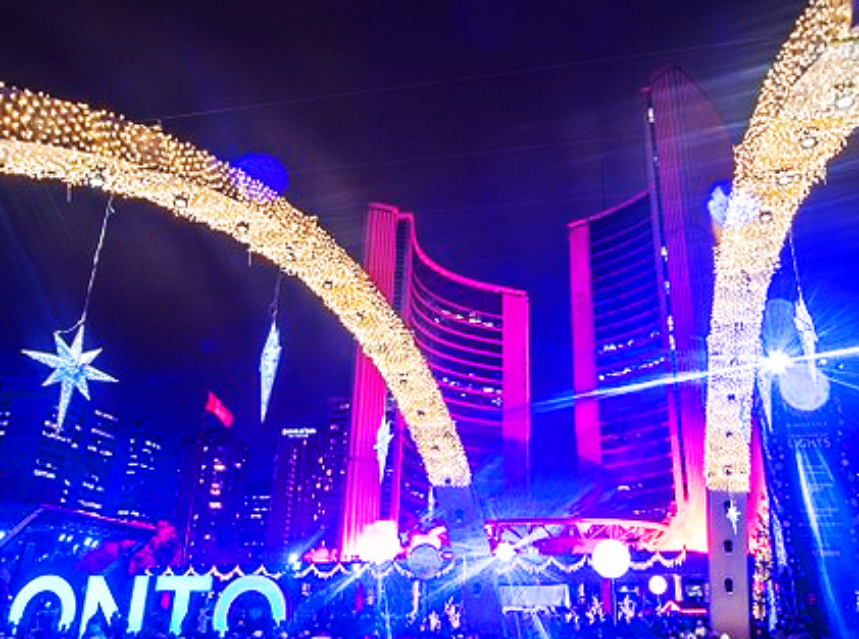 Toronto’s giant Christmas tree will be lit on November 27

The City of Toronto just announced that its Cavalcade of Lights kicks off Saturday, November 27, with a month-long display of enhanced lighting installations and décor for audiences to enjoy until Sunday, January 2. An annual tradition for 55 years, although there have already been several major tree lightings and events around the city, the City of Toronto says “Cavalcade of Lights marks the official start of the holiday season in Toronto. This year’s reimagined program will not include a fireworks display or stage concert.”

In their news release, the CIty says Cavalcade of Lights at Nathan Phillips Square remains a family-oriented experience. On November 27, the official lighting of Toronto’s 17.67-metre (58-foot) Christmas tree will take place. New holiday lighting installations will be revealed, along with special programming, including skating presentations, site activations and live performances that will be ongoing from 3 p.m. to 11 p.m.

Tree lighting at Nathan Phillips Square during Cavalcade of Lights

For those who don’t want to venture out, the CIty says the public can watch the first lighting of Toronto’s Christmas tree online on Saturday, November 27 here

Taking inspiration from light festivals and cultural celebrations around the world, Cavalcade of Lights will include elements from a variety of traditions for its new, enhanced lighting installations. As part of this year’s month-long celebration, the public can also explore tunnels made from thousands of energy-efficient bulbs, discover glowing ice sculptures in an enchanted forest (weather dependent) and a luminous lantern garden.

Along with the official tree lighting, Cavalcade of Lights kicks off with a special opening day and evening of pop-up performances around the Square and on the ice including:

Cavalcade of Lights is being designed with guidance from Toronto Public Health to provide a safe environment for participants. Participants should keep two metres distance from people they don’t live with as much as possible, and provincial regulations require mask wearing at outdoor events when physical distancing is not possible. If you are sick or have cold or flu-like symptoms, please stay at home and seek testing.

To help bring Cavalcade of Lights across the city this year, a ShowLoveTO Urban Game and neighbourhood activities are planned.

Discover holiday lights and activities in neighbourhoods across the city with the ShowLoveTO Urban Game. Presented by the City and powered by Toronto Association of Business Improvement Areas (TABIA), the ShowLoveTO Urban Game encourages players to use their mobile devices to find 25 illuminated, six-foot, three-dimensional heart installations located throughout the city, while solving clues for a chance to win great prizes.

This family-friendly game can be played from November 27 to Sunday, December 19 and offers an opportunity to explore the city and support local businesses. Learn how to play here

Cavalcade of Lights, when is cavalcade of lights toronto, when is toronto city hall tree lighting