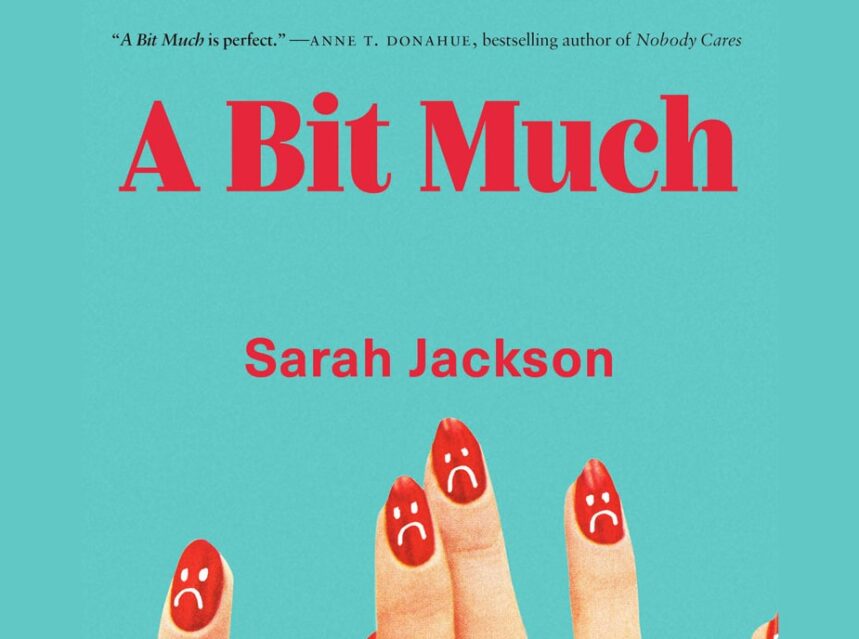 TORONTO, July 4, 2022 – Sarah Jackson’s debut novel deals with the lifelong friendship between two twenty-four-year-olds; Alice, a troubled, woman and her best friend Mia who is in hospital fighting a life-threatening illness. Mia’s battle is something Jackson can relate to.

“I was 17 and it was during frosh week at university when I got the diagnosis of cancer,” admits Jackson. “I was younger than what Mia is in the book, but I wanted the character of Mia to be different from me. I did not want to write about my exact experience. I also did not want to write from Mia’s perspective, so I wrote from the perspective of a friend of someone with a serious illness.”

A Bit Much delves into the complexity of friendships, the pain of insecurity and the frightening yet beautiful moments of first dates and finding love. Other relatable topics include having a university degree but not being able to find a job (or not being really motivated to look).

Alice is 24 and her world is falling apart. She has lost her job, her appetite, here ability to sleep and she is worried about losing her best friend Mia. Yet despite tackling some heavy topics, the novel is generously sprinkled with humour. Such as when Alice is at the subway station and sees a former high school colleague and does everything to avoid meeting her.

“My favourite books have a balance of humour and heartbreak,” states Jackson. “Humour has always been important to me in dealing with difficult things. I was told that when I was undergoing cancer treatments, I told some pretty good jokes.”

Alice sometimes struggles to get out of bed and when she does, she visits Mia in the hospital.

“Mia is complicated and layered. I hate the idea of using the model sick person who is angelic and perfect, adds Jackson. “Mia is real—she can be harsh and impatient, condescending, but she can also be strong, resilient, and fun. The book also deals with depression, and how for some struggling with it, they may have both have highs and lows, they’re not necessarily always feeling hollowed, always in bed. You can be laughing one minute and have that sinking feeling the next. I hope one takeaway is that depression is different for everyone.”

This is a first novel for Jackson who lives in Toronto and is a Book Editor at Penguin Random House Canada. She studied English Literature at the University of Toronto but says her dream of writing a novel started long before then.

“I love writing and since about grade 12 I have had a dream to write a book,” states Jackson “I was not great in science or math but then I took a Creative Writing class and my teacher told me I was good at it. Perhaps that is what continues to spur me on. My entire life I have been writing down notes and ideas, many of which get thrown out. Writing the book has been a lengthy process. In 2010 I wrote the first chapter but was not confident enough to continue. There was a five year stretch where I did not touch it, but I would write in spurts. My inspiration is that I wanted to write about transitions in life and about being in your early 20’s but also about dealing with a serious illness at a young age.”

When Jackson got a call recently from her publisher saying her book was in print, she could not wait to see it. “I was in Guelph dog sitting my mom’s dog and couldn’t get my hands on a copy,” states Jackson. Friends were sending photos of them with the book. When I finally got back and received my copy it was a surreal experience. It was overwhelming, exciting and I remember feeling teary eyed!”

Asked about the meaning of the book title A Bit Much, Jackson replies, “There’s a lot in the title depending on what someone is dealing with and perhaps it means something different to everyone.”

Having read the book (and finished the page-turner in two days), I mention that I felt that the title referred to the young Mia dealing with her illness being too much, and for Alice, doing a juggling act of dealing with a sick friend while starting a new relationship, on top of dealing with her own depression while also trying to find a job before her rent came due—it was all A Bit Much.

“Yes, I like that analogy,” agrees Jackson. “It is also about pretentious artist types who are too much. And Alice who is so judgmental can be too much.”

Asked if either character is based on real people, Jackson answers: “No character in the book is based on real people, but I must say that my sense of humour and Alice’s are similar, but I am not Alice or Mia, nor is anyone else I know. No one is exactly Alice. I have an active imagination and love to make things up and really delve into character traits. Some people who have read the book tell me that they think they are Alice. There are parts of Mia and parts of Alice I hope many can all relate to, and I am proud that people are enjoying the book and able to relate to it in some way.”

A Bit Much by Sarah Jackson is published by Penguin Random House Canada, now available in bookstores.