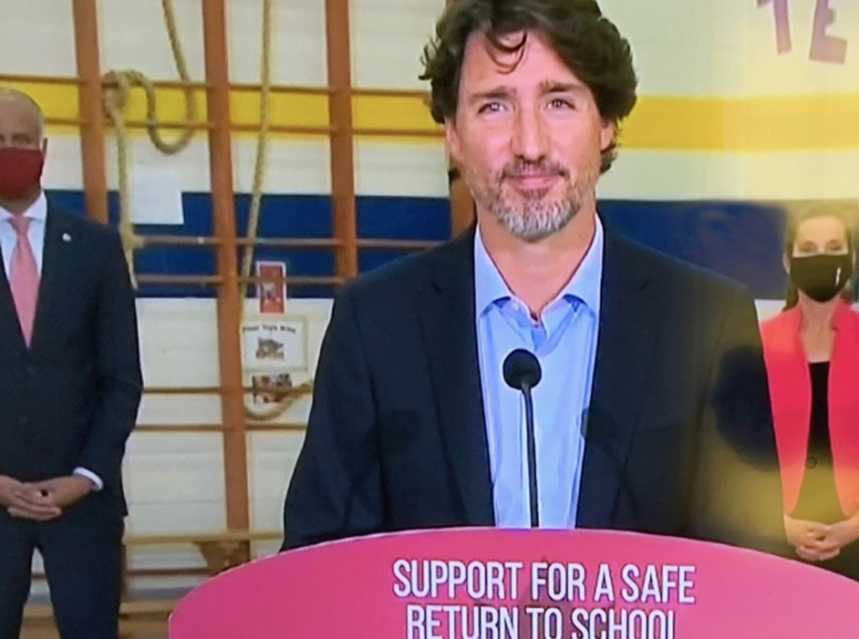 OTTAWA, ON., Aug. 26, 2020 — Prime Minister Justin Trudeau was in Toronto today to announce at Dewson Street Junior Public School that the federal government is going to kick in and extra $2 billion to the provinces and territories to help facilitate the safe reopening of schools in September.

The Prime Minister said the Safe Return to Class Fund will provide the complementary funding that provincial governments need, as they work alongside local school boards to ensure the safety of students and staff members throughout the school year.

“Canada’s children have shown immense strength throughout this global pandemic,” said Chrystia Freeland, Deputy Prime Minister and Minister of Finance. “With a new school year about to begin, our government is committed to helping ensure that Canada’s students and teachers can safely return to their classrooms.”

Trudeau emphasised that Canadian children must be safe when they go back to school and Canadian parents should not be stressing about their safety.

“Across the country, parents are worried about their kids heading back to school – as a dad, I get it. This morning, we’re announcing what we’re doing with the provinces and territories to help keep our kids and teachers safe,” said Trudeau.

“As a former teacher and a parent, I know first-hand the importance of school for kids’ social development and mental well-being, not to mention their ability to learn. The return to school is also an important step to restart our economy and get parents back to work while not worrying about the health of their children. The Government of Canada will remain a close partner to provinces, territories, and First Nations as we work together to keep children, families, and all Canadians safe and healthy during this difficult time,” said Prime Minister Trudeau.

How the federal funding will work:

The Prime Minister also announced an additional $112 million in funding for First Nations to support community measures to ensure a safe return to school on reserves. The government will continue to work with First Nation partners to help protect the health and safety of students and staff this school year.

According to the Government of Ontario, today’s federal announcement means the province will initially receive an additional $381 million on top of the nearly $900 million provided by the Ford government to support provincial back-to-school plans.

“Ontario’s investments lead the nation in supporting priorities like more cleaning, physical distancing, testing, and hiring of staff to ensure a safe reopening of our schools this September,” said Stephen Lecce, Minister of Education. “Today’s investment by the Federal government complements the already landmark investments made by our government in support of safe and healthy schools in Ontario.”

The province says that the federal funding will support several priority provincial initiatives including the $70 million to the hiring of temporary educators.

The province is also setting aside $50 million for any future pandemic learning needs, to ensure that Ontario is prepared for every scenario this Fall.

Pending federal approvals in December, the Ministry of Education will announce the second half of the payment later this year for the remainder of the school year.

The federal Safe Return to Class Fund is in addition to the more than $19 billion previously announced for the Safe Restart Agreement to help provinces and territories safely restart their economies. This agreement included funding to increase testing and contact tracing of the virus, support vulnerable Canadians, ensure the availability of safe child care, and provide income support for people who do not have paid sick leave so all Canadians can stay healthy.

Read more stories like this at TOTimes.ca and MTLTimes.ca…