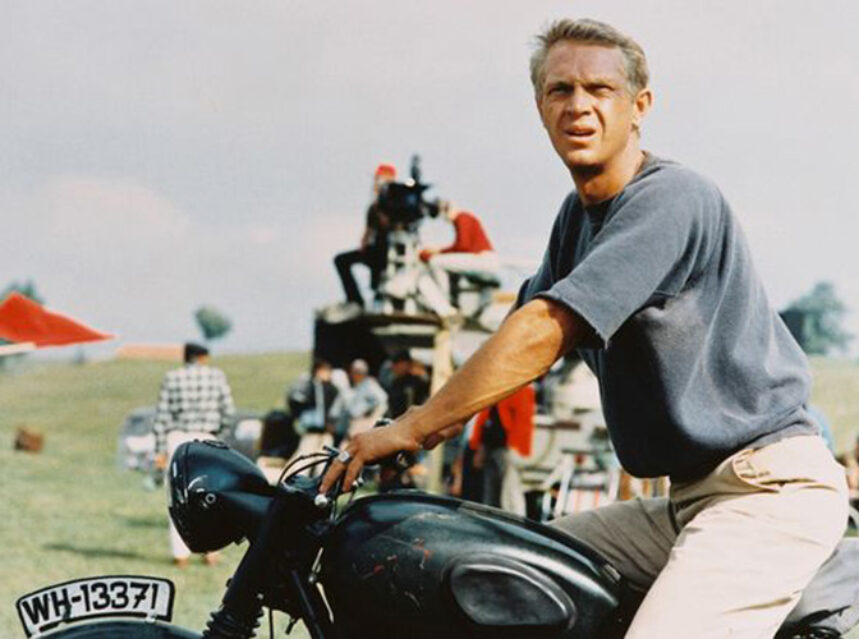 Steve McQueen – In the world of sports movies, there are at best a mere handful of memorable movies dealing with the fast-paced, highly dangerous world of auto racing (and only three come to mind): “Grand Prix” with James Garner; “Rush”, Ron Howard’s speed-charged story of the James Hunt-Nikki Lauda F1 rivalry during the 70s; and “Le Mans”, Steve McQueen’s docudrama tribute to the endurance test that is the 24 hours of Le Mans race in France.

It is the latter movie that is the subject of a fascinating pictorial behind-the-scenes coffee table book that tells the story of the making of “Le Mans”, and how it toppled one of the most popular male movie stars of the 1960s: Steve McQueen: Le Mans in the Rearview Mirror.

Written by Hollywood veteran prop man Don Nunley, who served as the movie’s property master, it chronicles through his words and pictures (over 400 of them in colour and black & white) how this trouble-plagued racing movie to end all racing movies was agonizingly put together throughout the summer of 1970. The Le Mans race takes place throughout a 24-hour space of time during a weekend every spring in the French town of Le Mans, and it is one of the most prestigious – and deadliest – international auto races.

McQueen, a self-confessed speed junkie who loved to race motorcycles and cars when he wasn’t churning out such epic hit movies as “The Great Escape”, “The Sand Pebbles” and “Bullitt”, wanted to make the ultimate auto racing movie as his personal pet project. He wanted to focus on the F1 circuit, until “Grand Prix” quashed those plans in 1966; as a result, he then set his sights on the 24 hours of Le Mans.

Through Nunley’s words and pictures, he effectively tells the story how “Le Mans” was a troubled production from the moment the cameras started rolling (the first bits of principal photography were film footage that was shot at the actual 1970 Le Mans race). The production went for weeks without a finished script; the shooting went for weeks over schedule and $1 million over budget; and most of all, the production had to deal with McQueen’s massive ego and sometimes childish behaviour, which began when the insurance company for the movie wouldn’t allow him to participate in the actual Le Mans race, believing that his getting into a potential accident would be harmful to the production, let alone McQueen’s well being. And as a result of this churlish attitude, McQueen harmed many of the personal and professional friendships that he nurtured throughout his career (especially that of John Sturges, who directed McQueen to fame in such pictures as “The Magnificent Seven” and “The Great Escape”, and was the original director of “Le Mans”).

However, Nunley does share a great deal of interesting anecdotes about the production that help to balance the ill feelings amongst the cast and crew that eventually festered throughout the shoot. There was his successful attempt to get McQueen to wear one of TAG Heuer’s bulky Monaco watches as a piece of product placement, which later became a valuable and much sought-after movie memorabilia item; then there was the basketball game that Nunley organized at his chateau during one weekend between the “Le Mans” crew and a group of local French players; however, the crew didn’t realize until it was too late that they were about to face off against the championship French national basketball team.

As well, his more than 400 photos that are in the book show quite explicitly the intensity of what kind of auto race Le Mans is, how much hard work was involved making this movie, not to mention the many moods of Steve McQueen on and off the set.

Released in the summer of 1971, “Le Mans” was a critical and commercial flop, despite the ambitious publicity campaign that Cinema Center – the film’s production company – undertook (which McQueen refused to take part in), and quickly derailed his status as a major movie star (which was just as quickly revived during the early 70s thanks to his performances in “Junior Bonner”, “The Getaway”, “Papillon” and “The Towering Inferno”). However, time has been quite kind to “Le Mans”, and has gradually found an audience and cult status as one of the definitive, honest movies about the world of auto racing.

Steve McQueen: Le Mans in the Rearview Mirror is an adrenaline-charged portrait of a movie star’s pet project that went totally awry, which left many car wrecks in its wake, yet has now become a sports movie classic, not to mention retained the superstar status of Hollywood’s original macho man.

And as McQueen said in his inimitable manner about the months-long endurance test that was the making of “Le Mans” the motion picture: “Le Mans was the toughest picture I ever made in my life. But it was worth it.”