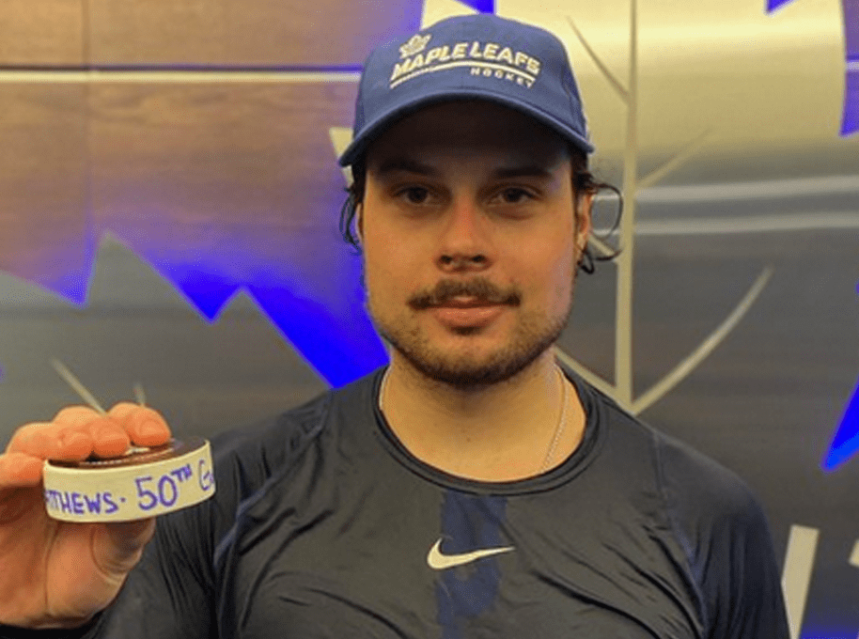 TORONTO, March 31, 2022 – Toronto Maple Leafs’ star forward, Auston Matthews scored his 50th goal tonight into an empty net with 2:06 remaining in the third period to make it 6-3 in a 7-3 victory at Scotiabank Arena against the Winnipeg Jets on Thursday. Matthews becomes the first NHL player to reach the 50 goal plateau in this campaign and only the fourth Maple Leafs player in history to score 50 goals in a season.

He joins Rick Vaive, Gary Leeman and Dave Andreychuk. Vaive holds the Toronto record with 54 in 1981-82, and Matthews is easily on pace to eclipse that mark.

At the post game press conference when asked “How does it feel,” Matthews said, “It was pretty special I think just to do it at home as well. The energy and the atmosphere tonight was pretty special…I don’t know if I ever envisioned it being an empty net goal but I’ll take it.”

“There’s a lot of love and support from all these guys, We’ve got an extremely close group and obviously it doesn’t happen without all the guys on this team, so it means a lot,” said Matthews.

Auston Matthews narrowly beat Edmonton Oilers’ Leon Draisatl to 50, who currently sits at 49 goals, while Chris Kreider of the New York Rangers is currently in third place in scoring with 46 goals, followed by Washington Capitals veteran forward, Alex Ovechkin with 42.

Meanwhile, newly acquired veteran defenceman Mark Giordano scored his first goal in a Maple Leafs jersey tonight. Giordano got things started for Toronto at 15:03 of the first period to make it 2-1 for the Jets at that point. His shot from the left face-off circle ricocheted off Jets defensemen Logan Stanley and Brenden Dillon. It was his first goal in his fifth game with the Maple Leafs after being traded by the Seattle Kraken.

Other scorers for the Maple Leafs tonight were William Nylander who scored twice, Ilya Mikheyev with a goal and two assists, John Tavares and Timothy Liljegren. Erik Kallgren made 20 saves for the Maple Leafs (43-19-5), who have now won three straight after also defeating their division rivals the Boston Bruins 6-4 and the Florida Panthers 5-2 in their previous two outings.

The Maple Leafs now go on a four game road trip before playing the Montreal Canadiens at Scotiabank Arena on Saturday, April 9. But next up are the Philadelphia Flyers this Saturday.

Matthews scores 50th, Who else scored 50 goals on Leafs