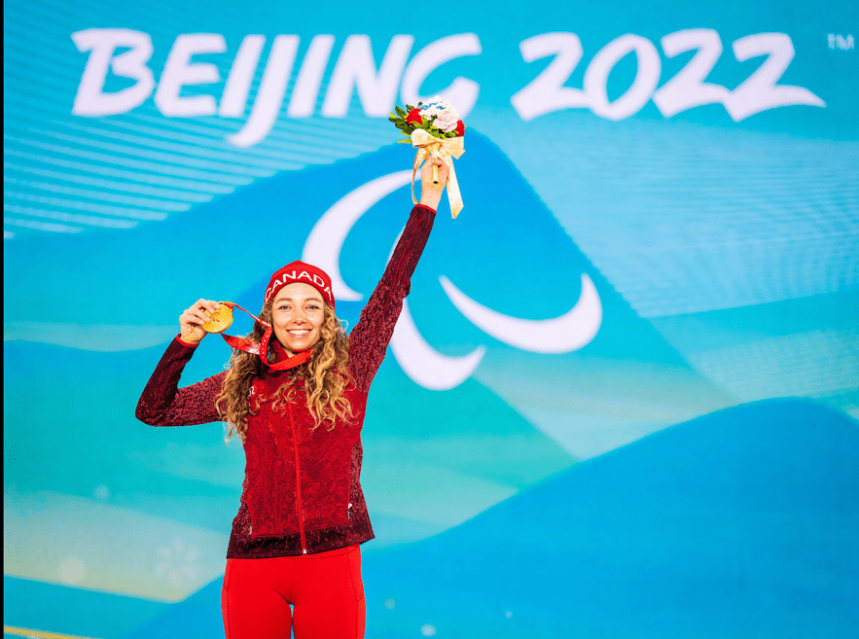 BEIJING, March 9, 2022 /CNW/ – Following a thrilling day of Para cross country sprint races at the Beijing 2022 Paralympic Winter Games, Canada has hit the 16-medal mark on day five of competition. Brian McKeever and guide Russell Kennedy, as well as Natalie Wilkie each claimed their second gold medal of the Games while teammate Collin Cameron won his second bronze. In wheelchair curling, Canada brought its overall record to 6-3 with two victories over Great Britain and Estonia on Wednesday.

It was a spectacular race for Natalie Wilkie in the women’s standing final. Coming out fifth after the start, she took down her opponents one-by-one in the just over one-kilometre course. She claimed the lead over Norway’s Vilde Nilsen on the final straightaway into the finish line, ultimately crossing three seconds ahead in 4:05.1. She is now a two-time champion in Beijing, also taking gold in the long distance. Wilkie, who won three medals as a 17-year-old in PyeongChang, now holds five Paralympic medals – three of which are gold. She was bronze medallist in this discipline four years ago.

“I’m still kind of in shock, it feels pretty unreal to have won the gold in the sprint,” said Wilkie. “I knew heading into this I had a really good shot of winning of a medal, but the sprint was just about deciding the colour. So many things can change in the sprint that there is never a guarantee. It was really left until the finish chute. Norway had a massive lead over me, and it wasn’t until the finish chute where I outskied Vilde, and it feels pretty good to be able to say I’m now a three-time Paralympic champion.”

Brian McKeever, in his sixth and final Paralympic Winter Games, is adding to his already golden legacy. In the men’s vision impaired final, he and guide Russell Kennedy bided their time in the race and made their final move on leaders Jake Adicoff and guide Sam Wood of USA on the turn into the straightaway. Their finish time was 3:19.5. The medal is 42-year-old McKeever’s 19th overall and 15th gold. It is the second gold of these Games so far for the world’s most decorated male Para cross country skier. He has won the short distance race in each of the six Paralympic Games in which he has competed.

“Today was tough, the sprint is probably our toughest event to win, the older you get the less pure speed you have left,” said McKeever. “Still it’s a long day with multiple rounds and I always feel like if I can make it into a final, I’ve got a good chance just with cumulative years of training.”

Collin Cameron clinched his second bronze medal of these Games, adding the sprint medal to his third place in the long-distance event. The men’s sit skier now holds five career Paralympic medals, all bronze. After qualifying in second and then finishing his semifinal heat in first, Cameron gave a good chase to the top two racers from China in the final but just ran out of real estate to overtake for a higher position at the finish. The bronze is a one-place improvement upon his PyeongChang result in this event.

“The sprint race is the most fun event here for me personally. I definitely had some big expectations coming in today, I really wanted to win this but I’m happy with third,” said Cameron. “All my competitors, they’re the best in the world and it was just great to go out there and have everyone race the best races they could and see what happens.”

Christina Picton qualified for the women’s sitting final where she finished sixth for her best Paralympic result for far at her first Games.

“That was my big goal [to make the final]. When you see the field, it looks pretty daunting so to have made it to the final, I’m just so proud and happy. It just makes me so excited for the next quad of training to see what I can do,” said Picton.

In other results, Lyne-Marie Bilodeau and Ethan Hess did not advance out of the qualification round.

The middle-distance races in cross country will take place Saturday, with the relays on Sunday.

Wheelchair Curling
Canada’s wheelchair curlers are victorious once again, putting a halt to a three-game losing streak with two wins on the day.

In game one versus Great Britain, the score was 3-2 for the Brits after exchanges of five consecutive one-point ends before Canada opened up the match in the sixth and seventh ends, scoring two in each. The final score was 6-3.

“We’re definitely happy with the win, and we were happy with how the game was going. We had some good ends set up, but we just had to be patient, and eventually it all paid off,” said skip Mark Ideson.

The Canadians then clinched a strong 9-3 triumph over Estonia in the evening. With a record of 6-3 heading into its final game of the round-robin on Thursday, Canada sits in sole possession of third place. The top four teams qualify for the semifinals.

“We’re feeling great. To have two wins today, it feels like we’re on a roll again,” said Dennis Thiessen. “Our destiny is in our own hands. We’ll get a good rest tonight and come out strong tomorrow, and finish it off.”