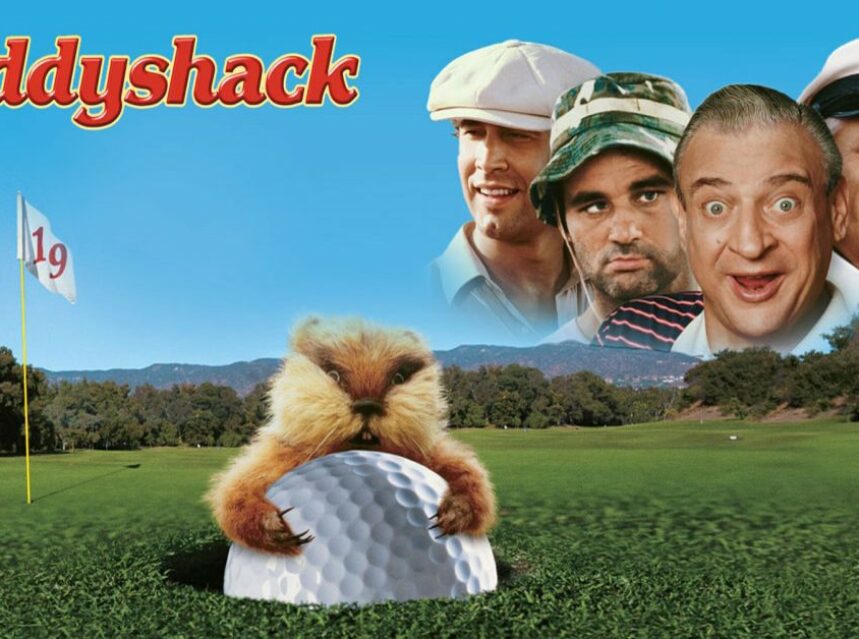 Caddyshack – Comedy fans and golf enthusiasts alike will always have Harold Ramis’ way out 1980 movie comedy “Caddyshack” in their collective conscience as one of the funniest movies of that genre that focused on that sport.

Yes, the outrageously comic misadventures of the “snobs versus slobs” battle amongst the fairways and putting greens at the mythical Bushwood Golf and Country Club that is “Caddyshack” these days is ranked as one of the greatest movie comedies of all time. Yet, “Caddyshack”’s double bogey road from concept to movie immortality was plagued with egotistical clashes, countless bouts of unpredictability, on set debauchery after the cameras finished rolling each day during production, a first-time director who never knew what a camera angle was, and a 400-page screen treatment in which some of its most memorable scenes were not even included and many of them were developed while principal photography took place (ironically enough, the Baby Ruth pool scene was part of the original shooting script).

Nashawaty, a writer for Entertainment Weekly, has done more than tell the story of a cult classic movie. He traces Caddyshack’s evolution to how its major players in front of and behind the cameras evolved in the world of contemporary humour that brought them to the hot and humid Fort Lauderdale set in the fall of 1979, from the Harvard Lampoon, to National Lampoon, to Second City, SCTV and finally, Saturday Night Live, and how it almost became a logical, organic coming together of talent.

And this book is filled with an endless rich vein of behind-the-scenes stories – most of them are quite unpredictable in nature – which makes one wonder how this movie ever got made in the first place. Practically every memorable scene was either improvised, ad-libbed or were last minute additions to the script (case in point, that pesky gopher, which became the thread that bound the film’s narrative during the latter stage of the production). Then there’s all of Bill Murray’s scenes as demented groundskeeper Carl Spackler, which were filmed in six days (that was all the time Murray had available before he had to return to New York for season five of SNL); Cindy Morgan’s refusal to do her nude scene with Michael O’Keefe with a photographer from Playboy present on the set (she changed her mind after producer Jon Peters threatened to fire her; she did the scene, sans photographer); and all those drug and alcohol-soaked parties every night at the motel where the Caddyshack cast and crew were staying in Fort Lauderdale (with Rodney Dangerfield being the heaviest user of the pot that was being smoke there).

However, if this book has to have a tragic figure, it’s Douglas Kenney, who wrote the script with Harold Ramis and Brian Doyle-Murray (whose experiences as a caddy at an exclusive Illinois golf club was the inspiration for Caddyshack). Kenney, who was one of the founders of National Lampoon and was co-writer of the 1978 blockbuster “Animal House”, hoped that Caddyshack would be just as big a box office hit as Animal House. But thanks to his constantly erratic behaviour (which was fueled by a never ending supply of alcohol and drugs), Kenney lost control of the film to its producers. It reached a low point for him during the press conference for the film at Dangerfield’s comedy club in New York, following its advance screening the night before, in which Kenney appeared so drunk and antagonistic, he had to be escorted out of the club by his parents. He then went on an ill-advised vacation to Hawaii with Chevy Chase; and in August of 1980, was found dead at the bottom of a cliff of an apparent suicide. Kenney’s story in the book is quite engrossing to read, and is not only a typical story of how comedians, and people involved in comedy, end up being sad, insecure individuals, it could have easily held up as a separate book in its own right.

Chris Nashawaty’s book Caddyshack is a fascinating, page-turning behind-the-scenes account of how a film production that was doomed to failure from the start evolved into a true cult classic in the annals of movie comedy. Now that’s a Cinderella story! (Flatiron Books, $37.99)