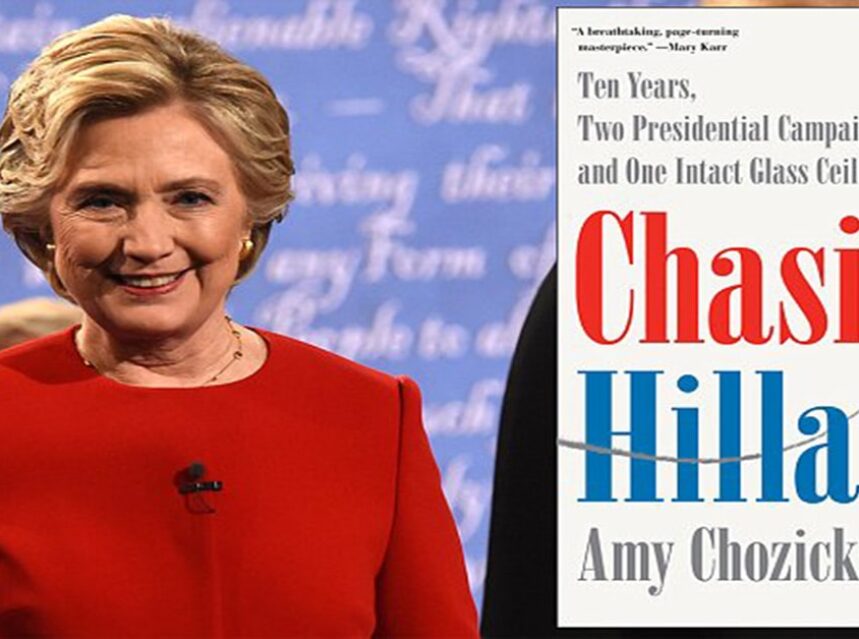 Chasing Hillary by Amy Choznick – The story behind how and why Hillary Clinton lost the divisive, volatile 2016 U.S. presidential election campaign to Donald Trump is quite a fascinating one, and it has already been the subject of two best selling books: one from the candidate’s point-of-view (What Happened) and from two of Hillary’s senior campaign workers (Shattered).

And now, there is another book that takes an inside look at Hillary Clinton’s 2016 campaign that was definitely hers to lose. However, this time it’s from the viewpoint from one of the girls on the bus … press bus, that is. And for New York Times reporter Amy Chozick’s book Chasing Hillary, it’s a story of how a veteran politician and former First Lady tried to break the political glass ceiling to become the first woman elected President of the United States, as told by a woman who spent most of her career breaking the glass ceiling of the male-dominated world of journalism in general, and political journalism in particular.

For starters, Chasing Hillary is an example of trench coat journalism and history-on-the-run reporting at its best that ranks up there with Timothy Crouse’s Boys on the Bus and Richard Ben Cramer’s What It Takes.

The book is a quasi-diary of Chozick’s on the road accounts of covering Clinton’s 2008 and 2016 presidential campaigns. From the trail of endless cookie cutter chain hotels, to criss-crossing the country by car and plane (until Clinton’s people splurged on a press bus during the latter part of the 2016 campaign), to the meals on the run (especially Panera Bread-style meal requests that were de rigeur every morning with the Clinton people), to the never ending campaign stops in every small town in America, to the snooty and at times uncooperative campaign staffers, to the stressful quest of getting scoops and meeting deadlines, Chozick gives the reader a gritty, unflinching – and at times thankless — look at what it’s like to cover a presidential campaign.

And the impression the reader gets when they finish Chasing Hillary was that Hillary Clinton was a two-time train wreck in a pants suit just waiting to happen. She comes off as a person whose intentions were genuine in theory, but became less genuine with every campaign appearance and whatever statement came out of her mouth (one vivid example of Hillary’s coterie of staffers trying to make her look genuine in the eyes of the media and potential voters was during a stop at the Iowa State Fair, when staffers scrambled to have her eat a corn dog so that she can be seen as a candidate of the people). And to make matters more difficult for Chozick and her job of covering Clinton, she and the candidate never really got along from the offset, thanks mainly to the pieces she wrote about Clinton in the New York Times that she thought were unflattering at the very least, especially a piece that was written late in the campaign that dealt with why she spent most of her time during this crucial period attending high profile fundraising events instead of being on the campaign trail.

What I enjoyed about the book is Chozick’s caustic, take-no-prisoners narrative style, which almost echoes the old school type of political journalism that you might have read about 50 or 60 years ago. In fact, I could envision her churning out the text on a battered Underwood typewriter, wearing a 1930s-style trench coat and a battered fedora with a “press” card jammed into the hatband, and a half-smoked cigar clenched between her teeth. There is plenty of sarcastic humor as well, especially as she gives a lot of code names to her media colleagues and campaign flunkies she has encountered on the road, from “Hired Gun Guy”, to “The Guys”, to “Policy Guy”, to “Brown Loafers”, to “Original Guy”; even Hillary doesn’t escape this code name treatment from Chozick (she gets the most polite one: “FWP”, or “First Woman President”).

Chasing Hillary is a fascinating, absorbing, page turner of a trench coat memoir about the rigours a political journalist goes through to cover an election campaign, and the personal and professional toll it takes on both candidate and journalist alike. Amy Chozick endured all of these rigors and pressures on the road and in front of her laptop computer, as she valiantly covered what she and many other people thought would be a monumental achievement in American history. All she got was a lot of bylines, scoops, headaches and a glass ceiling that has remained intact, but with several cracks in it, waiting for the next potential FWP to break through it.  (Harper, $34.99)