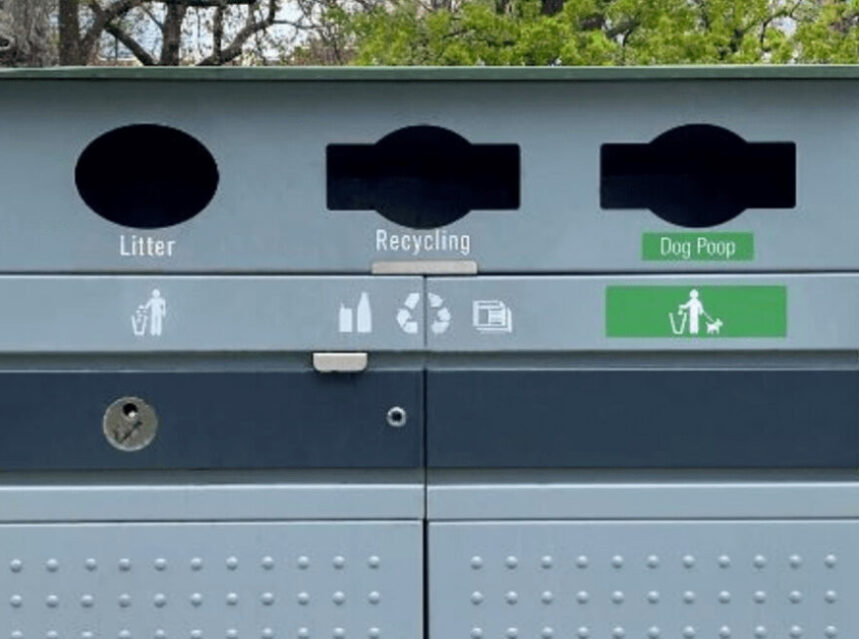 TORONTO, ON, August 27, 2021 – Toronto is adding 32 more dog waste street litter bins to its pilot program bringing the total up to 40. Today, the City of Toronto says it has expanded the pilot to test the collection of dog waste in street litter bins based on the success of the first phase of the pilot.

The City says this second phase of the pilot includes 40 bins, with eight bins from the first phase and 32 additional bins in new locations. One compartment on each of the pilot bins has been converted to accept dog waste. These compartments are labelled with stickers and should only be used to dispose of dog waste.

The first phase of the pilot began in May 2021 with 10 pilot bins adjacent to parks and in areas with high concentrations of dogs. In the first phase of the pilot, an average of 60 per cent of the organic material – the majority of which was dog waste – that is typically put in the garbage and recycling receptacles within these bins was put in the dog waste compartment.

“It is promising to see this pilot expand and provide even more opportunities for people to properly dispose of dog waste when out on the streets of Toronto. Thank you to everyone who used these pilot bins over the last few months and all those who will now be taking part in the expanded program. These bins are helping to keep our streets clean and reduce the amount of waste that goes to landfill.”– Mayor John Tory

A pilot bin can now be found near the following locations:

The City created the pilot in response to field observations and waste audits showing a steady increase in dog waste disposal in litter bins. A spring 2020 audit of a number of street litter bins located near parks and in areas with a high concentration of dogs showed that 45 per cent of waste (by weight) in these bins was organic material and that 99 per cent of that organic material was dog waste. The goal of the pilot is to confirm dog waste collection in street litter bins is feasible and can help the City divert more dog waste from landfill.

The organic material collected by the City is processed to create digester solids, which go on to become compost that can be used to nourish soil. The processing of organics also produces biogas, which can be upgraded into renewable natural gas and used by the City to help power its vehicles and facilities, while reducing greenhouse gas emissions.

The new street litter bin pilot also supports the City’s efforts to reduce recycling contamination in public space bins. Toronto has had success with similar programs in the past, including the installation of green bins in parks with dog off-leash areas. This program has diverted over 500 tonnes of organic material since it began in 2018.

The pilot is expected to expand further in November.

For street litter bins where there is not a compartment for dog waste, residents are asked to dispose of it in the garbage or take it home and put it in their green bin. Dog waste should never be put in the recycling or left on the ground. Any bag can be used for dog waste; it does not have to be compostable.

More information about organics disposal is on the City’s What Goes in the Green Bin (Organics)? webpage.