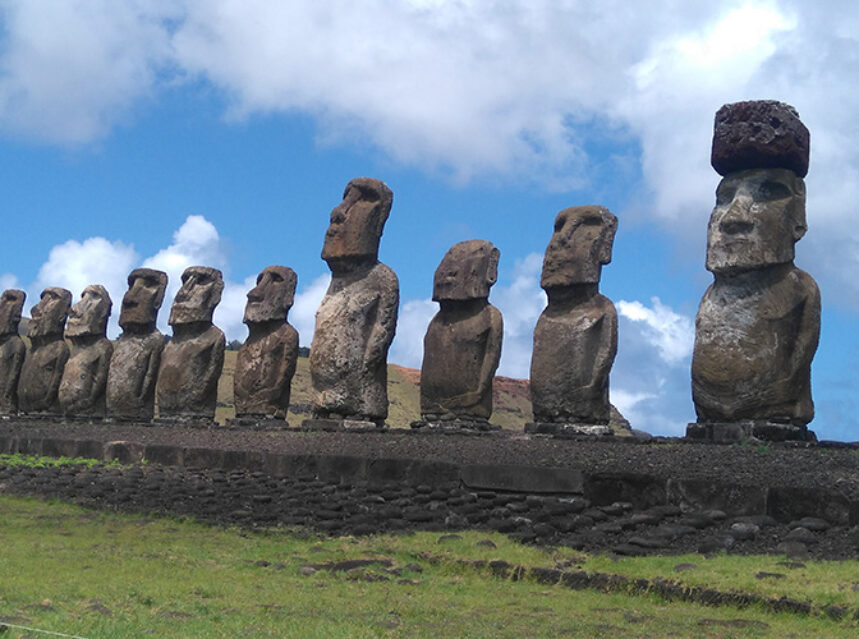 In the local language of Rapa Nui–the original name of Easter Island–this small Chilean outpost in the middle of the Pacific Ocean was also known as “Te pito te henua” or “The navel of the world” suggesting a special place plenty of mysteries. The island, transformed now into an attractive tourist spot, continues to wonder travellers from all over the world.

The main focus of attention are the dozens of moais, the giant sculptures that dot the island and seem to guard over its inhabitants. The most impressive collections of these giant statues are found in the area known as Tongariki where fifteen moais look toward the centre of the island, and Rano Raraku, where dozens of them are located in the most diverse positions. Indeed this was a place where the statues were sculpted using the abundant volcanic rocks found there. Rano Raraku is also an extinct volcano, one of the three that originated Easter Island some few millions of years ago.

For years since the island was first sighted by Europeans in the 17th century, the mysterious statues gave rise to all kinds of speculations, of course, the weirdest of them resorting to extraterrestrial visitors to explain the transportation and installation of the massive statues on their platforms (known as “ahus”). To the disappointment of alien fans, however, moving and positioning the moais was not such an impossible task for the natives who could have resorted to simple mechanical implements using local materials and a great deal of physical force to move them. Nothing magical or out-of-this-world technology was involved in the creation and installation of the moais.

However, some other mysteries remain: What was the purpose of the statues? What about the alignment of some other monuments with the solstices? There is now some consensus that the moais were funeral monuments, mostly for prominent members of the Rapa Nui society. The fact that at one point some of them were destroyed or removed from their platforms would have only been the result of internal conflicts.

Although Chile annexed Easter Island in 1888, for a long time the authorities in Santiago didn’t pay close attention to the distant territory which at one point hosted a leprosy asylum while on other occasions it served as a place of relegation for political opponents during the first decades of the 20th century. The Chilean Navy managed the island until the 1960s when it finally got a civilian administration. A historic first air connection to the continent in 1950 eventually made the Chilean authorities see the island as a part of its territory, especially for its potential for tourism: a potential that is being reached now.

Not surprisingly, given its historical context, the relations between the Rapa Nui natives and the continental government (which some more radical sectors even describe as “colonial”) haven’t been easy. In 2015 a conflict between the Chilean national parks agency, which manages almost all of the island except for the town of Hanga Roa, and the Rapa Nui community ended with an agreement to co-administer the sites. However, there are still some unresolved issues: the Rapa Nui people complain that not enough of the resources that the national parks agency generates from the visitors to the archaeological sites are invested back on the island which needs better roads and facilities for the islanders.

Preservation of their language and culture is also a concern for the Rapa Nui people. They are currently pursuing some legal autonomy that should allow them to have more control over immigration from the continent. They seek to limit the number of Chileans from the continent settling on the island and making the Rapa Nui language compulsory for all children enrolled in the island’s schools (a sort of Bill 101 Rapa Nui-style. Only that in the islanders’ case the “villain” is Spanish and not English–indeed many Rapa Nui have learned the language of Shakespeare to better interact with tourists, a show of traditional dance that I attended was introduced in both Spanish and English).

Political issues aside, Easter Island is a wonderful place to visit, it’s very safe (houses have no fences, something you don’t see in continental Chile) and people can walk late at night without a problem. Anakena is a pleasant beach with warm turquoise water, near the Ovahe site there is another beach not suitable for swimming but good for scuba diving. There is also great food, especially if you love tuna. This relatively expensive fish in North America is a local catch in Easter Island, so you’ll find it in many different dishes and at a reasonable price. Lobster and other local seafood are also plenty. And of course chicken: the birds were brought to the island and now are everywhere, they are really “free range” chicken.

The Rapa Nui people are ethnically Polynesian and therefore not related to the continental Chileans who are mostly of Spanish origin. However, some islanders are also descendants of mixed marriages.