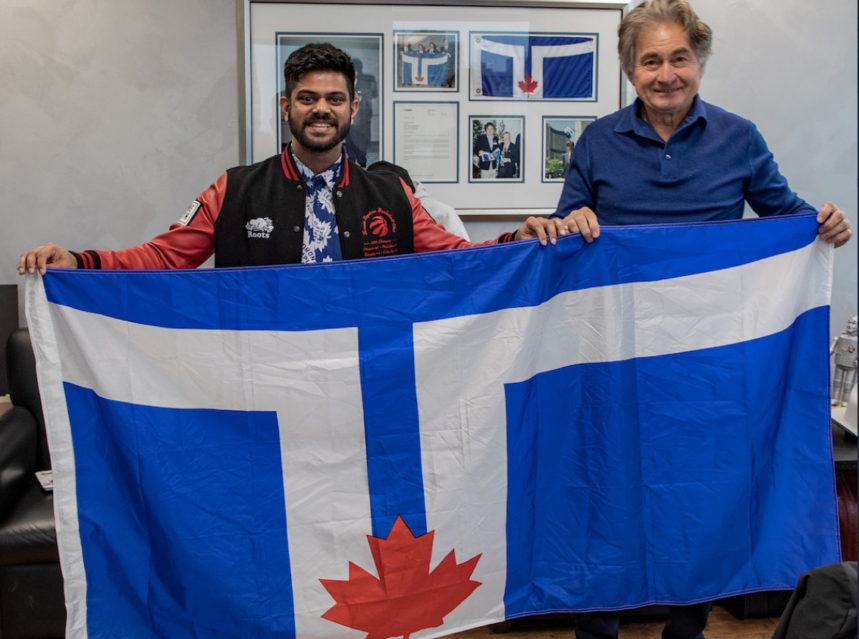 TORONTO, ON., July 21, 2020 — The amalgamations of the 1990s brought the communities that border the City of Toronto into a broader label of the Greater Toronto Area or GTA.

But did you know that these cities – Brampton, Scarborough, Etobicoke have symbols and flags that tell a story of their history and achievements that often get grouped into the label of Toronto. What flag should you be waving for your community?

Scarborough
Dedicated in 1969, the Scarborough flag was designed by local painter Doris McCarthy in 1968. She incorporated the famous Scarborough Bluffs into her design and the waters of lake Ontario.

Cabbagetown
Though not a city, the borough within Toronto has a strong Irish identity which is reflected in its community flag which features a Cabbage. In the mid 1800s, the area became a settlement area for Irish immigrants who had recently escaped the famine in their homeland. Many of the residents turned their front yards into gardens where they planted rows and rows of cabbage. A symbol which has stuck with the area for more than 150 years.

Etobicoke
The Etobicoke flag has seen two variations since it was first adopted in 1977. The original flag featured an alder tree surrounded by a crown. The more recent version issued in 1997, features the city skyline emerging from the alder leaf and a wave representing the cities proximity to lake Ontario.

Richmond Hill
Did you know Richmond Hill used to be Canada’s largest supplier of roses? This is proudly displayed on the city’s flag. The design was taken from the crest of the 4th Duke of Richmond, England, Charles Gordon Lennox, who was the Governor-in-Chief of Canada, 1918-1919.

Brampton
The Brampton flag features the city’s coat of arms which depicts several iconic Candian symbols including a beaver, grain, a steam engine, a ploughshare and a pine tree.
Chinguacousy (meaning “Land of the Tall Pines”) was a term used by the First Nations Peoples to describe the Mississauga area.

Mississauga
Mississauga also incorporates their city crest into their flag. The flag depicts symbols of the community’s history and the towns that were brought together through amalgamation to form what is now the City of Mississauga.

The water wheel and lighthouse pay homage to Streetsville and Port Credit which were amalgamated into the municipality. The wheat reflects the city’s agricultural past. The wings represent Mississauga’s strong ties to Canada’s aviation past. The town of Malton within the city is now the home of Pearson International Airport (formerly Malton Airport) and the birthplace of the Avro Aero, once the world’s fastest fighter jet. The laurel leaves represent honour and distinction.

City Toronto
Perhaps the most familiar flag in the city is the one for Toronto. Prior to it’s unveiling in 1974, the city had been using its coat of arms as a flag. The design by a 21-year-old graphic design student from George Brown College, Rene De Santis, was chosen over more than 700 entries. The now iconic flag features the outline of city hall which forms a ‘T’ over a maple leaf which symbolizes both Canada and the council chambers at the base of the tower.

No matter what part of the city you live in, use the unique times to show your community spirit and wave your local flags with pride.

More stories from TO Times…