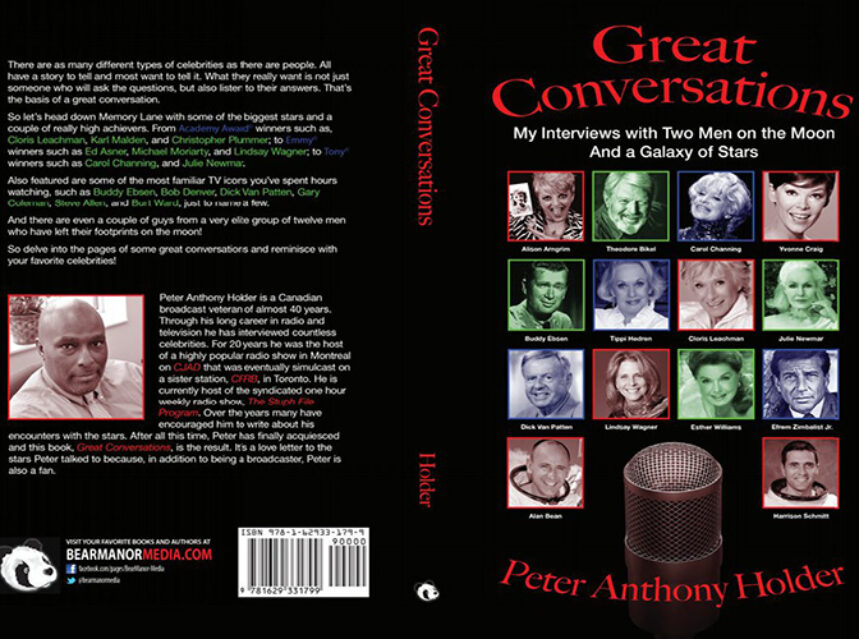 Peter Anthony Holder – I have known veteran Montreal broadcaster Peter Anthony Holder for over 30 years, mainly as the co-host of my “Book Banter” segment, which has been a regular feature since 1990, first on his long-running CJAD program “Holder Tonight/Overnight” and then his podcast “The Stuph File Program”, where it currently airs twice a month.

Although he is just as well read and shares a passion for show business and media like I do, Peter has that uncanny ability of combining these two characteristics into another one of his passions: conducting celebrity interviews.

I recall during his many working vacations that he took during the 1990s and 2000s, which usually fell during the Just For Laughs festival when he moonlighted as a venue coordinator at Club Soda, Peter spent his time after hours trolling the packed lobby and bar of the Delta and Hyatt hotels armed with his portable recording device and microphone, buttonholing comics in the quest of getting a brief interview with them so that it would air in future broadcasts of his show.

Most of the time Peter succeeded. And the end result was an entertaining interview, in which his personable approach and intelligent questions would prompt his subjects to answer them in a manner that would not sound like a typical interview with the press.

For nearly 30 years, Peter has interviewed countless celebrities, many of them legendary figures in the world of show business whom he and many others have grown up watching them on TV or at the movies. And with Peter, sometimes the stories behind the interview or during the interview were just as fascinating as the interviews themselves.

This is why his first book Great Conversations is so much fun to read. It’s basically a collection of 31 of his past interviews that he has conducted for his broadcasts since 1990. And the broad spectrum of celebrities that he has spotlighted in the book are pretty impressive to any show business enthusiast, whether it be Buddy Ebsen, Karl Malden, Tippi Hedren, George Takei, Phyllis Diller and even two NASA astronauts: Alan Bean (Apollo 12) and Harrison Schmitt (Apollo 17).

There are two things about this book that I was quite impressed with. First of all, Peter wasn’t content to place his interview subjects for the book in a chronological or random order. Instead, he decided to place two or three chapters at a time that had to have a common thread to them. For example, he placed the chapters dealing with Cloris Leachman and Ed Asner side by side because they both starred on “The Mary Tyler Moore Show” and had their own MTM spinoff shows; then he placed his interviews with Burt Ward, Yvonne Craig and Julie Newmar together because they starred on the ABC “Batman” TV series 50 years ago; and the raison d’etre behind pairing his interviews with the late Theodore Bikel and Christopher Plummer was that they both portrayed Captain Von Trapp in “The Sound of Music” (Bikel on Broadway; Plummer in the Oscar-winning film version).

Second, Peter shows through his conversational line of questioning that he can get the best out of his interview subjects, and offer responses and stories that sometimes go outside of the original purpose of promoting a book, TV series or movie, and end up making for fascinating listening (and reading). For example, Burt Ward candidly admits as a result of the growing popularity he and the late Adam West experienced from their roles as Batman and Robin, the three seasons they had filming the series was almost like a debauchery fest with countless female fans; Buddy Ebsen (best known for his role as Jed Clampett on “The Beverly Hillbillies”) talked about how his near fatal allergic reaction to a metallic makeup cost him the role of the Tin Man in the classic 1939 film version of “The Wizard of Oz” (yet the songs he recorded during his short time on the production was used on the movie’s final soundtrack); and although the late Gary Coleman preferred to talk about his current business ventures than discuss his years as Arnold Jackson on “Different Strokes”, Peter somehow managed to get him to open up about the difficulties (both personal and professional) he endured as a child star of a popular TV series.

The celebrity interviews that are featured in Great Conversations are more like engaging dinner conversations, in which the reader gets to be a special guest as Peter Anthony Holder and his celebrity subjects in question chew a lot of fascinating behind the scenes fat. It’s a vivid testament to how conducting an interview – and how to get it – can be an art. And if it’s carefully crafted like the way Peter has done it for so many years, can be a masterpiece, too.