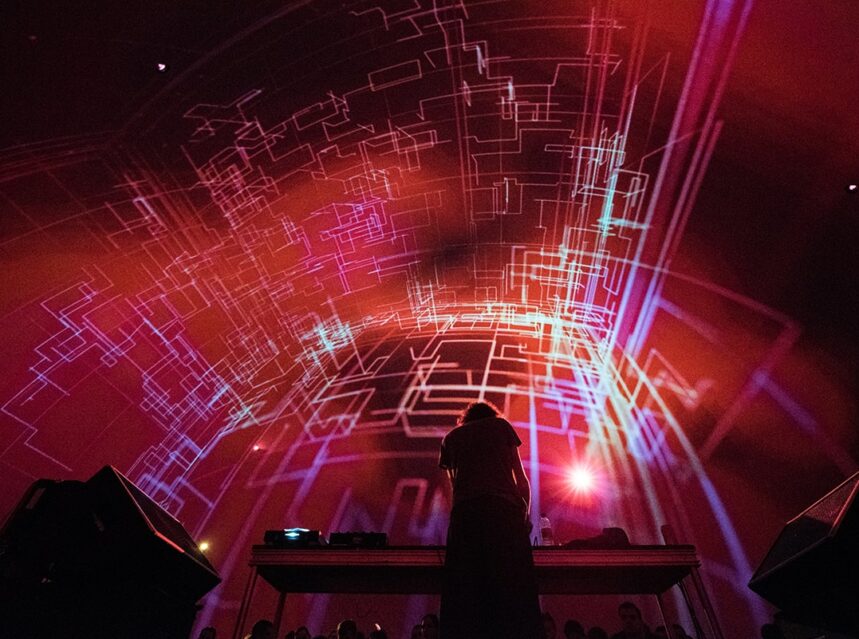 The end of august wasn’t quiet for Montreal’s electronic fans and technologies admirer – The Mutek festival was reuniting some of the finest and most forward-thinking artists for it’s 19th celebration of electronic music and digital arts. For the 5 days event, the international festival presented 150 artists from a staggering 27 countries – featuring 120 performances : 20 Canadian, 18 North American and 16 world premieres: for a record breaking number of 52 never-before-seen.

Half of the performances were from Canadian and Québec-based artists and the program achieved a total Gender Parity for the first time in it’s existence. It was hard to top the 2017 edition, but as you can see Mutek clearly managed that and presented more than an impressive line-up and share of experiences.

First, A/Vision is the signature series of the festival, for some it’s the jewel.  It’s where the digital creativity shines and unleashes itself for incredible visual experiences.  Only six artists had the privilege to present a live 30 minutes performance in front of the sit down audience at monument National – Honestly, they’re basically all highlight .

Amongst the most awaited segment, was the Russian collaborative and light art masters Tundra, who was presenting a world premiere performance called Nomad. A show that was created especially so they could present it at Mutek. Tundra usually works in 360-immersive installation using architecture of light’s and laser rather than live performance, so this made the A/V moment a unique must-see act.

They presented a performance that focused on pattern-base and interaction with extremely bright laser beam, of which the density seemed potent enough to cut metal. –  Photos by : Trung Nguyen

Montreal artist Herman Kolgen was returning as a headliner to the festival who brought him in the spotlight almost 20 year ago – Of course, it wasn’t just Mutek that brought Kolgen to the international scene, the talent and creativity is exceptional. Kolgen was part of the first cohort of artist to collaborate on the Mutek project that has now spread across Mexico, Tokyo, Buenos Aires, Barcelona, San Francisco and Dubai

Montreal’s Martin Messier also returned to Mutek, this time with France’s artist YRO for a distinctive performance named Ashes. The project was called as such because a fire destroyed the initial project and so begun this project out of the ashes. It consisted in visuals from high power microscopes that were on the stage and broadcasted live into the screen. Theses magnified images were sometime straight out of an space landscape and they were coordinated with strange sound, lights show and precise synchronized movements. – Photo by : Trung Nguyen

Australian A/V experimentalist and intermedia artist, Robin Fox presented  Single Origins, a laser madness. Fox’s latest A/V work, is the third in his series of laser/sound works exploring the possibilities of mechanically induced synaesthesia. Building on his previous meditations on the relationship between sound and light—Monochroma(2004) and RGB Laser Show (2013)—Fox composes this time around what is essentially a concerto for a laser beam.– Photo By Bruno Destombes

The A/Vision was only a small fraction of this year edition – The Nocturne and the Metropolis series both had more than a few electronic frenzyness over the Mutek week – Here are some of the most talked-about performances.

Algobabez literally give a totally new genres of performance.  The concept is to make music by writing code live, on a open-source software (superCollider), all of which is projected into the screen behind them. The duo was writing code on the fly and every new alteration was generating and shifting the music accordingly. A more than impressive way to create and perform – Definitely one of the most avant-garde style represented.

The Satosphere was only opening it’s door for full-pass access sunday night and it was more than a treat. Acid Pauli’s set on Sunday was closing the festivals in spectacular fashion under the outstanding SAT’s dome. The German artist brought his soft downtempo techno and lyrical style under multitude of hypnotic perspectives and stunning visuals signed by artists: Diagraf, LLL and Felix Felix Gourd Gourd. On top of all that, he made a special Leonard Cohen tribute – It was the perfect ambiance for a Sunday mood –  First photo by Bruno Destombes – Photos bellow by Trung Ngyuen

The classic friday techno’s night at the Mtelus was dominated by the Finland artist Aleski Parälä. Based in Uk, Aleski brough his well control beat that are infused with jungle and chicago fuse to create an elegant amalgam.  Aleski Parala sets was also supported with gorgeous projections from  Québec Artist – Push 1 Stop – Photo By Trung Nguyen

Chinese-born, Vancouver-based producer and musician Yu Su presented a organically groovy jazz-bient expeditions between coasts; a dub-inflected balance of luminous and wistful textures. Yu Su studied classical piano for years, devoting countless hours to learning the complexities of Bach, and later the ambiance of Debussy and Liszt. It’s only upon relocating to Canada five years ago that she got acquainted with disco and funk –  Photo By Trung Nguyen

After becoming the First-ever Jamaican representatives at Mutek Mexico, these dancehall scientist brought their futuristic weird take on dub infused rhythms to the opening night of the festivals for a solid Canadian Premieres – Photo By Bruno Destombes

This year for the first time Mutek stopped by the Mile-end neighbourhood and gave another delightful free outdoor scene. Already having quite a stunning set-up for their free stage at the Place-Des-Arts – It was a sweet surprise to enjoy the Red bull Hors-circuit stage even if rain was also part of the days