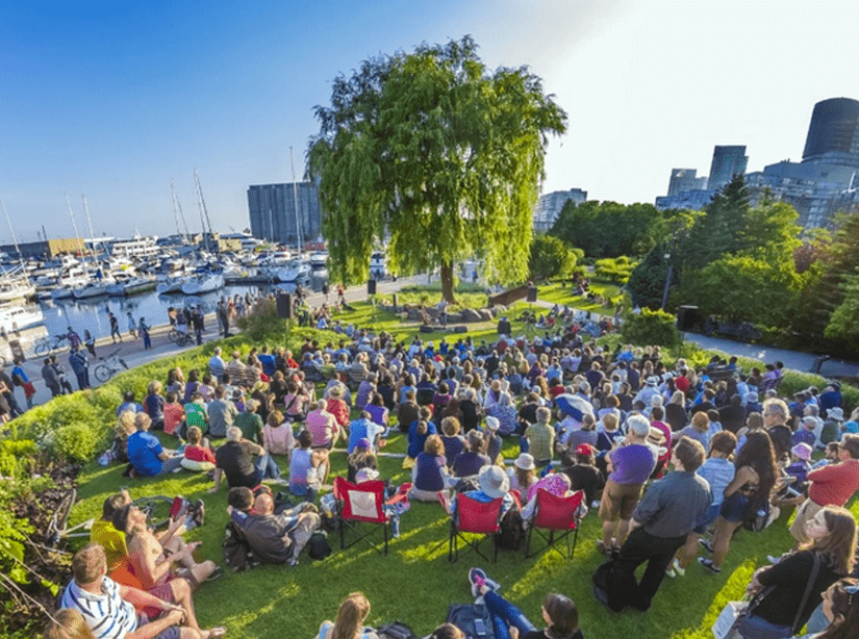 TORONTO, April 30, 2022 – Just as Canadian healthcare professionals are prescribing time in national parks as remedies, blue spaces are also perfect places to rejuvenate and enjoy outdoor life. Toronto’s beautiful waterfront is no exception. The Waterfront BIA is has just announced it has teamed up with partners from across Toronto to bring to life unique ways to experience the lively art and culture the city has to offer along the water.

With activations taking place at major Toronto waterfront landmarks for the spring and summer months – from a sculpture made out of smoke as a part of the Toronto Biennial, to the return of the beloved Redpath Waterfront Festival, to so much more food, art and music – there will be no shortage of exciting things to do and sights to see along the water.

Today, the Waterfront BIA revealed the following line-up of must-see programming along Toronto’s waterfront, with more to come.

Toronto Waterfront Events at a glance:

How To Build A River

Since 2019, Toronto-based artists Vid Ingelevics and Ryan Walker have documented the transformation of the Port Lands Flood Protection Project, one of the most ambitious civil works projects in North America. Part of the Scotiabank Contact Photography Festival, their third series of photographs, How To Build A River, documents the extraordinary operation of building a new mouth for the Don River and the innovative bioengineering practices used to construct this complex ecology. The photographs will be displayed publicly on wooden structures along the Villiers Street median to be observed and enjoyed by all.

Our Home and Haunted Land

WHERE: Canada Malting Silo at Queens Quay and Bathurst

Sponsored by the Waterfront BIA, created by Nadine Valcin and Priam Givord, and produced by Ngardy Conteh George and Alison Duke of OYA Black Arts Coalition, Our Home and Haunted Land is a large-scale 2D projection made to explore the colonial legacy linked to key landmarks in Toronto. The ten-minute visual journey reveals the hidden histories that haunt us and make visible the Black and Indigenous presence on Turtle Island and Tkaronto. The stories will be projected on a loop on the silo through the evenings.

Harbourfront Centre presents the Ontario premiere of A’nó:wara Dance Theatre’s multidisciplinary work, Sky Dancers, on stage May 20-22, 2022 at Fleck Dance Theatre, as part of the contemporary dance series Torque. Sky Dancers explores the impact of the Quebec Bridge disaster of 1907, which killed 33 ironworkers from the Mohawk community of Kahnawake. When the bridge collapsed while under construction, the fallout was felt around the world and the aftermath still echoes across generations today. Through the integration of contemporary and traditional dance genres, award-winning Mohawk and mixed heritage choreographer/director Barbara Kaneratonni Diabo, whose great-grandfather Louis D’Aillebous died in the tragedy, brings the past to the present in a way that will haunt and captivate audiences, deepening our understanding of Indigenous peoples’ history. Kaneratonni Diabo will also be leading a masterclass on different styles, perspectives and the meanings behind Indigenous dances on May 17 from 7-9pm at the Walter Carsen Centre for the National Ballet of Canada. For tickets and further information about the performances and masterclass, visit harbourfrontcentre.com

JUNIOR, Toronto’s international children’s festival, is Harbourfront Centre’s multidisciplinary festival for kids ages 4–14. Taking place annually over the May long weekend, it’s one of Canada’s largest children’s festivals, co-curated by Mary Francis Moore, Associate Artistic Director of the Confederation Centre of the Arts, and Nathalie Bonjour, Director of Performing Arts at Toronto’s Harbourfront Centre.Through theatre, dance, music and art, JUNIOR’s programming inspires “Big Thoughts for Growing Minds,” acknowledging children’s big questions about the world and their place in it. While official summer programming will be announced in more detail in May, festival-goers can expect an event that explores what it means to be connected to each other and the community around us in a joyful way – at a time when personal connection has never seemed more important.

This spring and summer, the Waterfront BIA will welcome back100 Days of Summer by Art & Water, Canada’s first and only floating arts and culture festival for its Cultural Group’s Summer Music Series. Taking place at two locations along Queens Quay on weekends from May until September, performances will bring together songwriters, musicians and other artists from all walks of life to deliver art and culture into the daily lives of Torontonians, inviting everyone to stumble across captivating performances at the waterfront from Canadian artists.

As part of the Summer 2022 season, The Power Plant Contemporary Art Gallery will present a show by Brazilian contemporary artist Paulo Nazareth titled STROKE,encompassing a selection of long-term projects and a new body of work for his first solo exhibition in Canada. Known for his long-duration performances and installations, the projects on view will include The Red Inside (2018 – ongoing), a series that sees the artist follow the Underground Railroad (a network of secret routes and safe houses established in the United States in the early to mid-nineteenth century, providing escape to enslaved African Americans) from New Orleans to Toronto. The exhibition also features Dry Cut (2019 – ongoing), a series of monumental sculptures depicting Rosa Parks, Ruby Bridges, Martin Luther King, Jr. and Tommie Smith that underline Nazareth’s interest in networks of resistance that was originally installed at the Rockefeller Center in New York City, and will be displayed in locations along Toronto’s waterfront from Sugar Beach to The Power Plant. The presentation of these sculptures is in partnership with the Waterfront BIA.

STREET: Summer 2022 at The Bentway

WHERE: Under the Gardiner Expressway and surrounding neighbourhoods

The Bentway’s summer 2022 season, STREET, includes a series of public art installations, roving performances, workshops, conversations and celebrations that explore all things street, or what urbanist Jane Jacobs called the city’s “most vital organs.” Running May 26 to August 21, STREET invites the public to see the streets of Toronto anew – both under the Gardiner Expressway and along roads, sidewalks and public spaces in surrounding neighbourhoods. The season includes notable exhibits like PARADE, a major new work by Tony Award-winning set designer and artist Mimi Lien and Bodies in Urban Spaces (May 26-28) by choreographer Willi Dorner, in which audiences follow a colourfully-clad group of dancers as they entangle with architecture on a breathtaking tour through Toronto’s streets.

The Toronto Biennial of Art is Canada’s leading visual arts event focused exclusively on contemporary art from around the world. For 10 weeks every two years, local, national and international Biennial artists transform Toronto and its partner regions with free exhibitions, performances and learning opportunities. On now through to June 5, 2022, this year’s Biennial features an eye-catching, one-time-only performance to enjoy along the waterfront by renowned feminist artist, educator, and author, Judy Chicago, sponsored by the Waterfront BIA.

A Tribute to Toronto by Judy Chicago

The Toronto Biennial of Art and Waterfront BIA presents A Tribute to Toronto, 2022, a newly commissioned site-specific work by legendary artist Judy Chicago. Chicago first turned to pyrotechnics as an artistic material in the late 1960s in an effort to feminize the atmosphere at a time when the California art scene was male-dominated. Between 1968 and 1974, she executed a series of increasingly complex firework pieces that involved site-specific performances around California. For the 2022 Biennial, Chicago will create her first project on water and her first Smoke Sculpture™ presentation in Canada. This one-of-a-kind Smoke Sculpture™ will be visible from the shore of Lake Ontario as a series of environmentally safe, non-toxic coloured pigments are released from a barge. For this one-time performance, the public is invited to gather at the waterfront to see the lake and sky transformed.

WHERE: TBA – three locations along the waterfront

Exploring the link between our collective and unconscious patterns of movement and environment, Two x 30will bring a series of 30 one-hour contemporary art and dance performances to Toronto, stretching across multiple landmarks this June. In partnership with the Waterfront BIA, three of the 30 performances will take place along the waterfront for passersby to view moving dances highlighting the complexities of human interaction and communication. Timing and location details to come.

Part of Waterfront Toronto’s Temporary Public Art Program, Harbour Square’s floating temporary art returns this summer as a striking, thought-provoking public art installation that continues to bring interest and diversity to the waterfront and across the city. The initiative is meant to engage a greater diversity of artistic voices to help reimagine and shift our relationship to and understanding of our landscape and shoreline. Artwork for 2022 will be unveiled in July.

For the first time in over two years, the much-anticipated Redpath Waterfront Festival, of which Waterfront BIA is a sponsor, is back and in-person for 2022. Over the course of two days in mid-September, city-dwellers and tourists alike are invited to celebrate the last moments of summer with a Water Weekend at HTO Park and Sugar Beach. The unique festival will feature both on-land and on-water programs, including Parks Canada representation to learn about Ocean Literacy and snap a pic with a giant inflatable beaver, appearances by members of the Royal Canadian Navy teaching attendees about what it’s like to be a sailor, and the can’t-be-missed Theodore TOO Tugboat, a 65-foot working replica of the original TV character. All of that, and plenty of music and food to boot. All aboard!

WHERE: Various Locations on the Waterfront

Waterfront Toronto and the Waterfront BIA have come together again to bring Projects for These Warming Days, the 2022 Artist in Residency program, to the waterfront. As the next official artist-in-residence, interdisciplinary Canadian artist Lisa Hirmer will focus on exploring the critical theme of climate change. Hirmer is known for her critically-acclaimed work that examines the relationship between human interaction and surrounding ecologies, speaking to larger ponderings about living through a climate crisis. With a longtime interest in the Toronto Waterfront, and a Master of Architecture thesis focused on the Don River, Hirmer aims to create meaningful experiential encounters for the community during her residency. ​

Hirmer plans to plumb the depths of these inquiries through a series ofthree temporary installations and performances between late spring and fall this year, that will write new meanings on the waterfront. Each piece will engage the observer in different ways. A planned carbon-negative sculpture in Aitken Place Park will provide space for sitting with the complexities and grief of climate change. Meanwhile, a text-based work appearing in public spaces along the waterfront will introduce the city to the new landscapes due to the renaturalization of the Don River. A third, performative piece will use a combination of voice, movement, painting and drawing to reduce the psychological separation between humans and our atmosphere.

As part of the Harbourfront Centre’s year-long multidisciplinary initiative, Nordic Spotlights will showcase contemporary Nordic culture from across the globe, with a series of unique experiences that highlight Nordic art. The installations, taking place throughout all of 2022, will feature work from various disciplines, from performing arts, visual and digital arts, design, literature, culinary and film, to shine a spotlight on the creativity and innovation between Canada and the Nordic regions of the world.

Immerse yourself – literally – in world-renowned art at 1 Yonge St. with the Immersive Van Gogh, Immersive Klimt and Immersive Frida Kahlo. These beloved digital art shows surround visitors with stunning projected animations of the artists’ most famous pieces of work, offering an experience of colour and detail like you’ve never seen before.

Explore all the sunny activities the waterfront has to offer! For details on the spring & summer programming, please visit https://www.waterfrontbia.com/upcoming-events/.