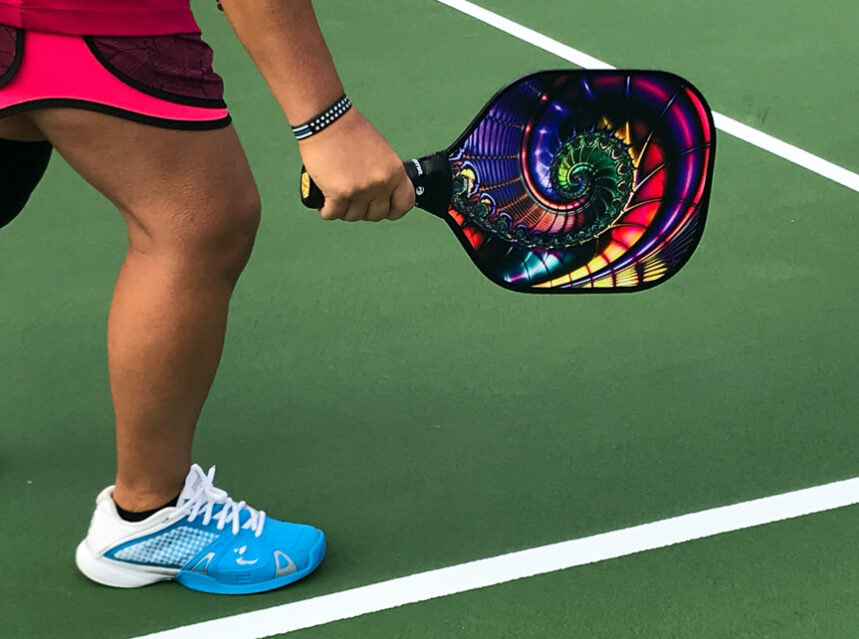 Pickleball combines the best elements of other racket sports including tennis, badminton, and table tennis. It can be played indoors or outdoors with a traditional badminton-sized court and a modified net.

Pickleball is a two or four-player game that was developed as a way of getting the whole family involved in a game. This means rules are simple and gameplay is relatively easy to pick up. A lot of these rules have been adapted from tennis, badminton, and table tennis!

Before you begin a game of pickleball, you must familiarize yourself with the 5 rules of pickleball and understand how to play the game. This article will show you the way.

Pickleball is played on a court that resembles a badminton court, usually measuring around 44×20 feet. This court is used for both singles and doubles play in pickleball.

The net height is around 36 inches on the sidelines and approximately 34 inches in the middle of the court. The court features a similar striped layout as a tennis court, with right and left service courts and a 7-foot non-volley zone at the front of the net. This is usually called the “kitchen.”

The ball is usually served diagonally beginning with the right-hand service square, and the serving side can only score points.

Every player in a game of pickleball will need a proper paddle made of wood or lightweight materials such as graphite and aluminum. This is usually smaller than a tennis racquet but bigger than a ping-pong paddle. A player will also need a net and a pickleball.

Pickleball is a pretty straightforward sport to play, meaning you can always get an immediate start in the game. Here are some of the fundamentals that you need to know to play pickleball:

To serve the ball at any time, the player must make sure to keep one foot behind the backline and then hit the ball using an underhand swing. This should be aimed toward the service court that is diagonally over the net and must clear the no-volley zone. Service begins only from the right-hand court and only one fault is allowed.

In pickleball, the ball must bounce twice – one time on each side of the court – before a player can “volley” the ball back. When you serve the ball it will bounce in the receivers service court. During this time, the team serving must stand back and wait before the ball bounces back on their side before moving and playing the ball into the air. This is an essential rule that provides long rallies in a game of pickleball.

Scoring in pickleball can be pretty difficult for a beginner. Yet all you need to remember is that a team will only score a point when they are serving.

The player standing in the right-hand service area of the court – server 1 for this sequence – will always begin. They will continue to do so until a fault is made by their team. If playing doubles, each player on each team will keep serving until a fault is made which then transfers the serve to the opposing team, a move known as a Side Out.

Pickleball is typically played to a score of 11. Here, the winning team must win by two points or the play will continue until one team wins by two. You will also earn a point if the opposition commits a fault.

If you want to successfully play a game of pickleball, you must avoid making any faults!

A fault occurs on a service when a ball falls short of the service court including the non-volley line. If it is served to the wrong court, is out of bounds, or is long behind the back service line, it’s classed as a fault.

Like tennis, the following moves are classed as faults in a game of pickleball:

Remember the server gets only one fault before losing their serve!

These are some of the basic things you must learn if you want to properly play pickleball. Provided you follow the information above, and abide by the five rules of the game, you’ll be playing pickleball like a pro in no time!