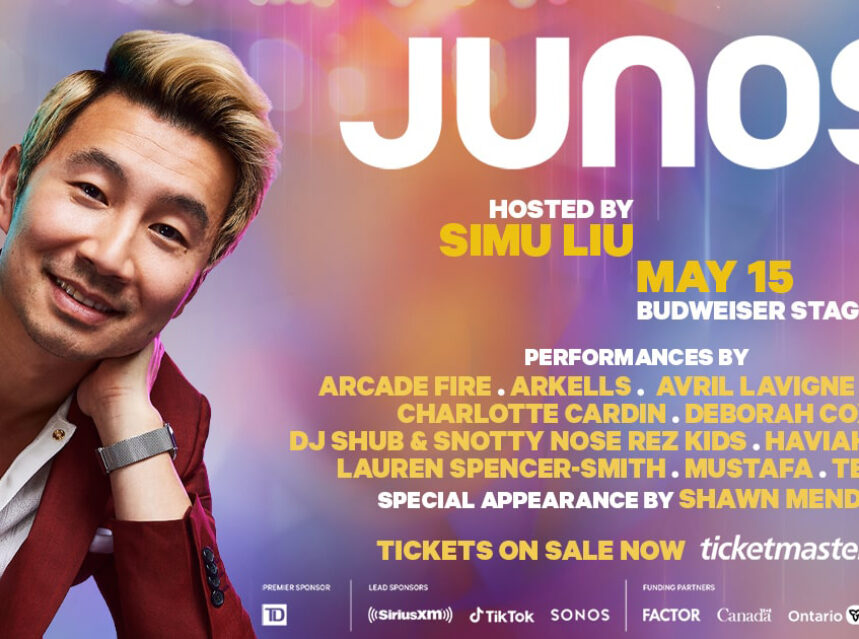 Tickets to the 51st Annual JUNO Awards are available at ticketmaster.ca/junos

TORONTO, May 13, 2022 — The complete list of performers and presenters set to take the 2022 JUNO Awards stage in Toronto has been announced by the Canadian Academy of Arts and Sciences (CARAS) and CBC. This year’s show, hosted by Marvel Studios star of Shang-Chi and The Legend of The Ten Rings,Simu Liu, will broadcast live from Toronto’s Budweiser Stage on Sunday, May 15 at 8 PM ET/5 PM PT nationwide on CBC TV, CBC Radio One and CBC Music, and streamed live on CBC Gem, CBC Listen, and globally at CBCMusic.ca/junos, and CBC Music’s Facebook, Twitter and Youtube pages.

These newly announced artists join a world-class line-up of performers set to light up the night at The 2022 JUNO Awards Broadcast including Arcade Fire, Arkells, Avril Lavigne, Charlotte Cardin, and Mustafa.

Earlier this year, it was shared that award-winning recording artist and world-renowned Broadway, television, film and fashion icon, Deborah Cox, will be inducted into the Canadian Music Hall of Fame at The 2022 JUNO Awards. Toronto Raptors alumni, NBA Hall of Famer, author and music producer, Chris Bosh, will make his debut on The JUNO Awards stage to induct Cox for her tremendous contributions to Canadian music. To celebrate the milestone, Cox will perform a medley of her chart-topping hits during her inductee award presentation and performance presented by TD Bank Group.

The 2022 JUNO Awards will also see a special appearance by treasured Canadian artist and hometown hero Shawn Mendes, who will receive the International Achievement Award.

New seats to be a part of this historic celebration of Canadian Music have been released. Tickets are on-sale now at  ticketmaster.ca/junos.

The 51st Annual JUNO Awards and JUNO Week 2022 will take place in Toronto, ON  from May 9 through May 15, 2022, culminating in The JUNO Awards. The 2022 JUNO Awards, produced by Insight Productions (a Boat Rocker company), will make history on Sunday, May 15 as it broadcasts and streams for the first time from an outdoor venue at Budweiser Stage in Toronto, live across Canada at 8 p.m. ET/5 p.m. PT on CBC TV, CBC Gem, CBC Radio One, CBC Music, CBC Listen, and globally at CBCMusic.ca/junos.