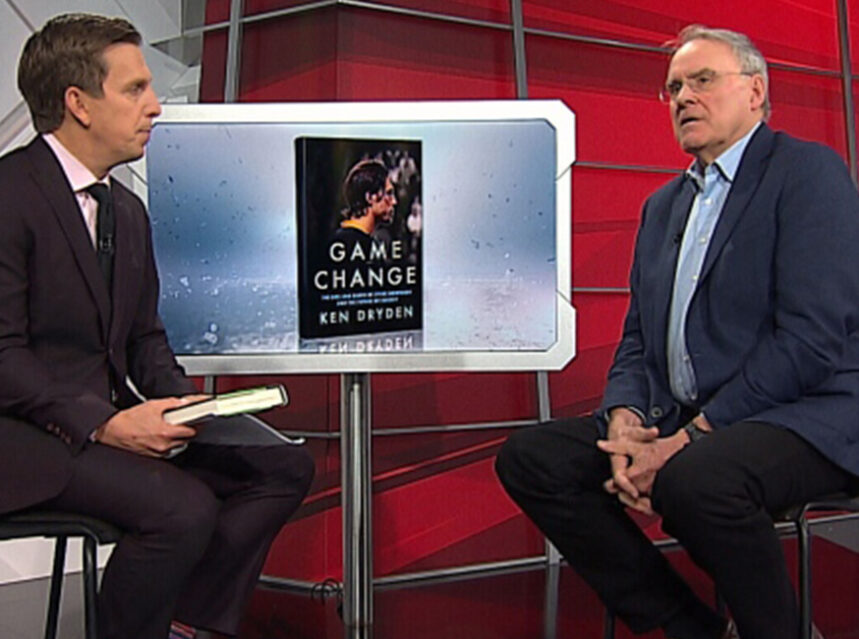 Ken Dryden – Game Change – Ken Dryden, the Hall of Fame goaltender who was part of the Montreal Canadiens dynasty of the 1970s that saw them win six Stanley Cups throughout that decade (including four Cups in a row between 1976 and 1979), has always loved the game of hockey.

And although he hung up his skates as a player nearly 40 years ago, Dryden’s love of the game has never wavered. It has transcended into five bestselling books, including his classic 1982 memoir The Game, and his 1989 book Home Game that looked at how hockey has played a role in Canadian society. And now in his latest book Game Change, Dryden has focused his love of the game of hockey to an issue that has recently affected many current and former players in a devastating manner that is becoming a growing concern in both professional and amateur hockey: head injuries and concussions.

Game Change tells the story of the late Steve Montador, a player who worked his way up the ranks of professional hockey to become a reliable and likable defenceman with such NHL teams as the Calgary Flames, the Florida Panthers and the Chicago Blackhawks during the 2000s. However, Montador absorbed a lot of heavy body checks during his time with the NHL, which resulted in countless concussions and he ended up with chronic traumatic encephalopathy (CTE), a traumatic brain disorder … which was diagnosed only after Montador’s death in 2015 at the age of only 35.

But why did Dryden choose to relate Montador’s tragically short life and his struggles with head injuries that were sustained on the ice for the book, instead of a more high profile player like Eric Lindros, who had to cut short his NHL career because he sustained too many concussions?

“Before Steve died, he was not living a nice life. He was having big memory problems. His father told me the story about after Steve died, he went to his car dealer, who told him that he had Steve on his speed dial when he lived in California, because he was losing his car keys so often, he had to press a button on his phone to be contacted with the dealer in Toronto to get a new set of keys made. As well, he was suffering from chronic depression and anxiety, and had problems sorting out fairly simple questions that were usually easy for him,” he added.

One of the major reasons why Game Change is such a compelling book to read is that Dryden tells the story of Steve Montador’s tragically short life and his struggle with CTE by interspersing that narrative with juxtapositions of how the game of hockey has developed since the first officially recognized ice hockey game was played at McGill University in 1875, which he includes the creation of the NHL in 1917, the evolution of the game, the 1967 NHL expansion, the evolution of hockey equipment, how other NHL players suffered and dealt with the effects of head injuries, and how science is trying to detect and prevent related brain injuries that are sustained on the ice.

“These are all significant parts of the story because when I am telling the story of a life, science had to be part of it, and because when people think about it, you got to address it; you got to find out the extent to which it is part of the answer, and to the extent to which it isn’t. If you don’t, then your audience is going to say ‘well, it’s all about science’,” he said. “And I knew it also had to do with the history of the game, and if you really know the game, you would know this game has changed utterly since it started back in 1875. And players and coaches have always changed it, always finding new ways of doing things. I wanted to weave all of those things together because they are all related to each other.”

Dryden firmly believes that the main problem regarding NHL players getting way too many concussions and head injuries is their on-ice shifts that are becoming shorter and shorter (averaging about 35 seconds per shift, as opposed to about two minutes per shift during the 50s, 60s and 70s).

“Those two minute shifts meant there was all kinds of open ice, there was not that much contact, and that allowed a lot of time for things to happen,” he said. “Now shifts are about 35 seconds each, which means there’s almost no space, players are moving much faster on the ice, and there are many more forceful collisions, and that’s where the danger comes in. And the most dangerous part is not the stick, or the elbow, it’s the player’s body because it’s bigger and moves much faster. If the brain is hit by a stick, or an elbow, or a shoulder, it doesn’t distinguish whether it’s intentional or not, it’s a blow to the brain.”

And Dryden believes that the NHL referees in particular and the league in general must be much stricter when it comes to enforcing players who inflict checks or other blows that result in head injuries or concussions on opposing players. “It’s always about the case of the perpetrator, but what about the guy who gets hit? He may look all right, but it may well be that he is not all right, while the other guy gets a two- or five-minute penalty. That’s not quite fair, not quite necessary and not quite right,” he said. “What it should be is quite simple: if you give another player a hit to the head, there are no excuses; you’re gone!”

Game Change is probably one of the most important books about the game of hockey today, and one of the most serious medical issues that is affecting current and former players that until recently has been paid a great deal of lip service at best. Ken Dryden shows that he still loves and cares for the game of hockey that has given him so much fame and adulation, and has written the story of the late Steve Montador and how he has become the face of how head injuries can have a devastating effect both on and off the ice, with a great deal of thoroughness, intelligence and humanity. Basically, he wants us to remember Steve Montador for how he played the game of hockey and loved every minute of it, instead of how he died as a result of it.