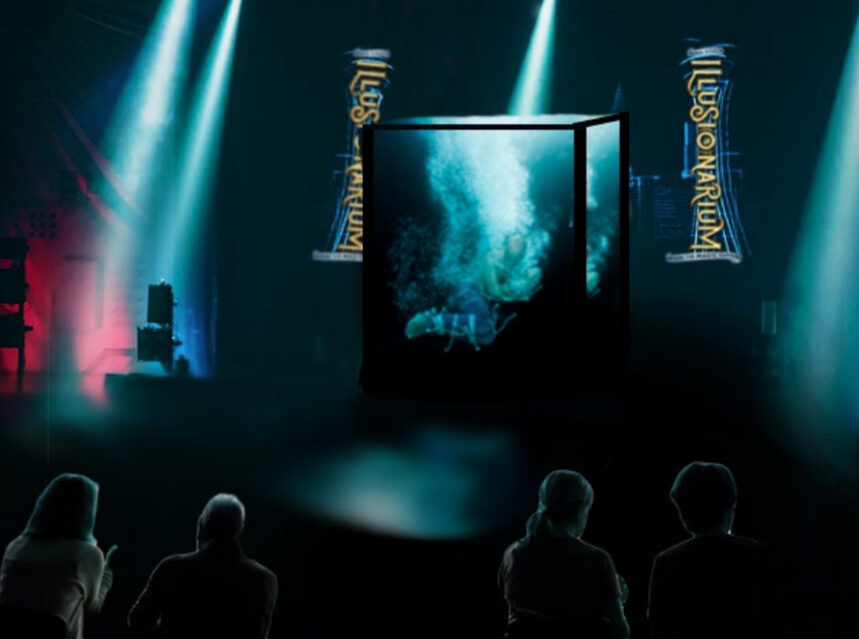 TORONTO, Nov. 11, 2020 – The innovators behind IMMERSIVE VAN GOGH, have announced that they will present a ground-breaking World Premiere Immersive magic experience just in time to light up the holiday season.

This December, Lighthouse Immersive and renowned illusionist Jamie Allan invite you into a world of intrigue, mystery, and wonder, with the World Premiere of Allan’s ILLUSIONARIUM at the former Toronto Star printing press.  A labyrinth of magical rooms transporting audiences to different eras in time, ILLUSIONARIUM takes you on an immersive journey through the evolution of magic as the world’s most famous illusionists share their deepest secrets.

“From the beginning, our vision for the Toronto Star printing press space was to fill all the galleries and build a multiplex destination for immersive cultural experiences,” said co-producer Svetlana Dvoretsky, Lighthouse Immersive. “When the pandemic hit, it really called that into question, but we found a way forward and have been able to bring close to 200,000 people through the exhibit safely. We are also really pleased to be employing roughly 300 people between the three exhibits, at such a difficult time in the arts and entertainment industry.”

Using 3D projections, life-like holograms and live magicians, ILLUSIONARIUM offers the chance to experience some of the greatest, grand-scale illusions in the world within a physically distanced setting.  The first-of-its-kind installation will occupy the third gallery space in the historic Toronto Star printing presses and run alongside IMMERSIVE VAN GOGH and GOGH BY CAR, filling the complex with awe-inspiring immersive experiences that appeal to all ages and tastes.  Opening December 14th, 2020 for a limited engagement to February 15th, 2021, tickets for Jamie Allan’s ILLUSIONARIUM go on sale to the public on November 14th at 10:00am at illusionarium.com.

Conceived by British high-tech magician Jamie Allen (iMagician), this experiential exhibit blends Jamie’s encyclopedic knowledge of the history of magic with state-of-the-art technology, bringing the illusions of the past into the 21st century. Comprised of a series of a series of four magical rooms, each representing a different era in starting with the 17th century, visitors are guided through ever-evolving styles of magic spanning hundreds of years.

Upon entering ILLUSIONARIUM, visitors are welcomed by renowned illusionists, starting with Harry Houdini and Robert Houdin. Giving audiences a peek behind the curtain, these famous magicians share the essence and fundamentals of magic. The sequence of rooms – PALAIS ROYALE, THE EGYTPTIAN HALL, ON-AIR STUDIOS, and EVO-LUSION HALL – connects via passageways displaying magic artwork and historical artifacts evocative of the time and place in history each room portrays – fully immersing you in the culture and soul of the era.

“ILLUSIONARIUM was in many ways born of my own lifelong love of magic as well as from the circumstances of the pandemic,” says co-producer Corey Ross, Lighthouse Immersive.  “I had intended to bring Jamie’s iMagician stage show to Toronto this December, but when it became clear that wasn’t possible, he and I began to ask ourselves what could be possible in this new world. What we have come up with is infinitely exciting and really demonstrates how amazing ideas can be born from challenge.””This experience offers large scale magic in intimate, fully immersive spaces. Visitors will encounter life-like holograms – Houdini will appear before your eyes! – 3D projections, spectacular special effects, and jaw-dropping magic. It is truly unlike anything that has been done before.”

“ILLUSIONARIUM is completely unique in seamlessly blending technology and practical magic – I have been combining magic and technology since I was a boy but this takes that passion to a whole new level.” says creator Jamie Allan. “I am so thrilled to debut this new experiential work in Toronto – it is a great launch pad for new productions and the community of talented performers is so impressive.”

“We have been so galvanized by the response to IMMERSIVE VAN GOGH and to be able to provide cultural and entertainment experiences throughout this time when people need it more than ever,” adds Dvoretsky.

To maintain visitor safety, guests will be in physically distanced groupings, with a limit of four per Magic Circle, and a maximum of twelve Magic Circles in a room. As with IMMERSIVE VAN GOGH, masks will be required at all times.

Tickets for ILLUSIONARIUM will begin at $99 per couple, VIP options and add-ons are also available.