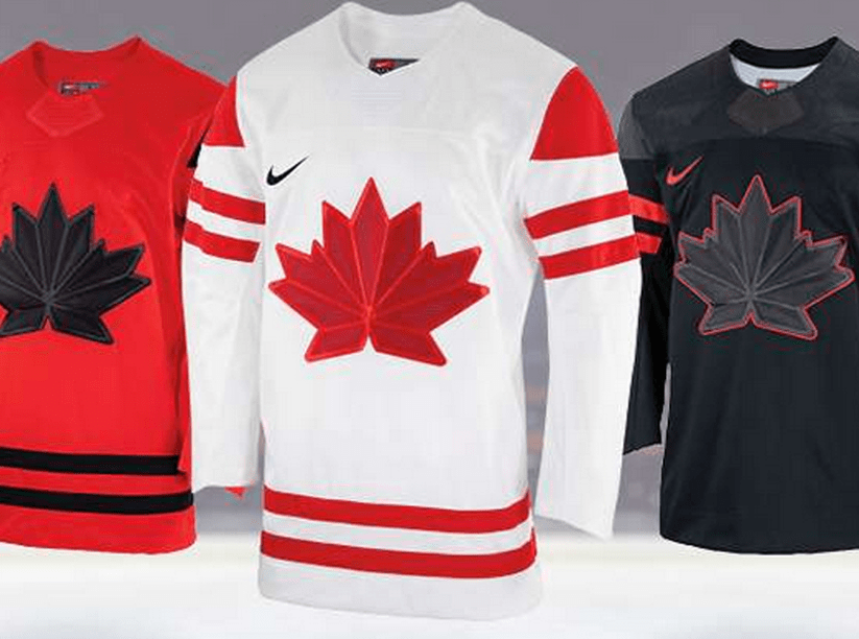 CALGARY, Alta. November 24, 2021 – The Canadian maple leaf reigns supreme as Hockey Canada reveals the new Olympic hockey jerseys to be worn by Team Canada’s men’s, women’s and para hockey teams in Beijing, China. With the 2022 Olympic Winter Games getting underway on February 9, 2022, Hockey Canada unveiled the three new looks on Tuesday night during the TSN and RDS broadcast of the Rivalry Series game between Canada’s National Women’s Team and the United States in Ottawa, Ont.

Team Canada Olympic and Paralympic hockey teams will hit the ice in striking traditional red and white, as well as a black version.

“The Olympics and Paralympics are the pinnacle of sport, and we are excited to unveil the three jerseys that our men’s, women’s and para hockey athletes will wear as they represent our country on sport’s biggest stage in Beijing,” said Tom Renney, chief executive officer of Hockey Canada. “We know how passionate Canadian hockey fans are, and we know fans from coast to coast to coast will embrace the new jerseys as they cheer on our country’s best hockey players. We look forward to wearing these spectacular jerseys on the ice in Beijing, and seeing Canadians all around the world supporting our teams in the Olympic and Paralympic jersey,” said Renney in a news release from Hockey Canada.

The Team Canada Olympic and Paralympic jersey boldly positions the iconic Canadian Maple Leaf as the centre crest, with the red jersey featuring a unique and extremely dynamic black Maple Leaf with black accents, while the white jersey showcases a classic red leaf with red accents throughout the jersey. The third jersey is a black-on-black design, with a black base complimented by a black Maple Leaf highlighted with a red outline.

Hockey Canada says it goes without saying that “All three jerseys were built for performance and sustainability using Nike Swift technology, which enhances mobility, reduces weight and helps minimize distractions during intense competition.”

“There is no greater honour in sport than representing your country on the world’s biggest stage at the Olympics and Paralympics, and our men’s, women’s and para hockey team hopefuls are excited by the opportunity to wear these three jerseys that embody Canadian hockey,” said Scott Smith, president and chief operating officer of Hockey Canada. “We know our athletes, staffs and hockey fans alike will wear these jerseys with a tremendous amount of pride when our hockey teams head to Beijing represented by one leaf, as one team with one goal in mind, and that is bringing three gold medals back to Canada.”

Of course, before Canada’s men’s, women’s and para hockey teams begin their quest for gold in Beijing, fans can purchase their own jersey for $180 (plus applicable taxes) by visiting shop.hockeycanada.ca. Replica Team Canada Olympic hockey jerseys are also available for purchase in-store and online at Sport Chek and other select retailers.

“Team Canada’s hockey jerseys are one of the most iconic symbols of the Olympic Winter Games,” said David Shoemaker, chief executive officer and secretary general of the Canadian Olympic Committee. “The red, white and black of the jerseys represent Canada’s rich history as the most successful country in Olympic hockey. Canada’s 22 hockey medals, including 13 gold, are a testament to the excellent work of Hockey Canada and the quality of Canada’s athletes. I can’t wait to cheer on the men’s and women’s teams at the Games.”