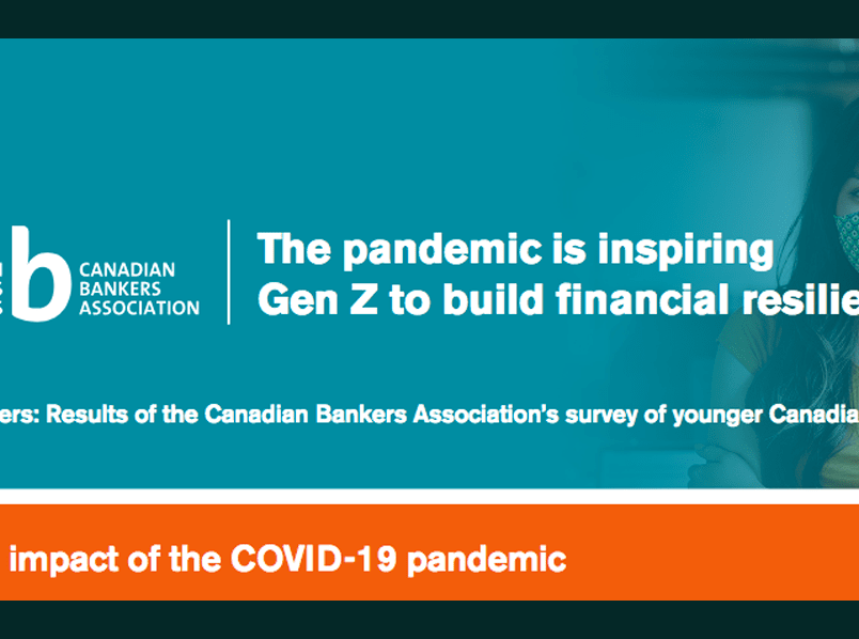 The coronavirus pandemic has tested the limits of Canadians over the past 20 months. What began as a health crisis quickly morphed into an economic crisis, with the spread of COVID-19 shocking large segments of the economy and leaving many without paycheques. While no generation has been unaffected by the pandemic, the economic impact was distributed unevenly. Many younger Canadians in Generation Z, or Gen Z, have had their education disrupted, career plans changed, and financial prospects diminished largely because they are overrepresented in the highly affected service sector, according to a new survey by the Canadian Bankers Association (CBA).

The survey was published to mark Financial Literacy Month, which takes place each November, and found that more than half (53 per cent) of Gen Z respondents (aged 18-25) felt the pandemic upended their financial security, with that number rising to 73 per cent for those in less stable financial situations. At the same time, nine-in-ten (88 per cent) Gen Zers are feeling optimistic about their financial futures, and nearly all of them (98 per cent) are actively making plans to strengthen their financial resilience.

“Gen Z was dealt a disproportionately tough hand during the pandemic, but it has also shown incredible resilience in channeling its natural gifts for perseverance, adaptability and motivation,” says Neil Parmenter, President and CEO, Canadian Bankers Association. “Despite the setbacks, younger Canadians are eager to forge ahead, be prepared for the unexpected and build bright futures as our economy recovers.”

For a generation that has recently entered adulthood, it’s the second time that Gen Z has faced an uncertain future caused by disruptive events: the first was the Great Recession of 2008-09 and now the COVID-19 pandemic of 2020-21. Indeed, these two seismic events in their formative years have shaped a generation’s worldview when it comes to their financial well-being.

The CBA survey found that Gen Z is keen to save. Three-quarters (74 per cent) of those surveyed have a savings account and a similar proportion (77 per cent) say that they put at least one per cent of their income aside as savings, with an overall average of nine per cent of income saved. While respondents in higher self-reported income groups are more likely to be savers, and save more on average, the majority (68 per cent) of those in less secure financial situations also have a savings mindset.

When asked what they are saving for, the overall top responses are: an emergency fund and financial independence. Both goals are likely top of mind against the backdrop of the sudden and unexpected economic shock brought on by the pandemic. The most-cited savings vehicle is the Tax-Free Savings Accounts (47 per cent), followed by High Interest Savings Accounts (27 per cent) and Registered Retirement Savings Plans (20 per cent).

Gen Zers are taking active steps to track their expenses, control their spending and save money. Overall, 71 per cent of Gen Z respondents say they are actively budgeting, with more than half (58 per cent) saying they do so in a formal manner by:  keeping a written record of expenditures (21 per cent), maintaining financial spreadsheets (20 per cent), or using digital tools (17 per cent). Nearly a third of respondents (29 per cent), however, say they do not set a budget to help guide their financial decisions.

Younger Canadians may be avid budgeters, but the vast majority of Gen Z survey respondents (92 per cent) say they experience barriers with sticking to a budget. The most common barrier is not earning enough money (43 per cent) – a sentiment particularly acute for more economically disadvantaged Gen Zers – followed by unexpected expenses (42 per cent) and shopping impulsively (38 per cent).

Almost identical to the proportion of those saying the pandemic upended their financial security, more than half (52 per cent) of Gen Zers say that they would have suffered greatly during the pandemic without government income supports. Perhaps not surprisingly, that number rises to 73 per cent for respondents in basic and precarious financial situations.

About two-thirds (64 per cent) of Gen Zers surveyed received COVID-related emergency government benefits. Again, that number rises to 70 per cent among those in more unstable socio-economic situations. Consistent with their savings mindset and penchant for budgeting, more than half (57 per cent) of Gen Zers who received emergency response and recovery benefits saved at least some of this money. And in response to a separate question, slightly less than half (48 per cent) say they used government benefits to help lower their debt.

Debt management, responsible use of credit and pandemic-related anxiety

The majority (73 per cent) of Gen Zers report having some type of debt, with the average reported debt load being $14,100. Among those with debt, the two most common are credit card (49 per cent) and student loans (39 per cent). Interestingly, of those with credit cards, half (49 per cent) of respondents say always pay off their credit cards in full each month, whereas 38 per cent carry a balance. Moreover, despite the prudent use of debt and a propensity for saving and budgeting, nearly one in three (29 per cent) are embarrassed about how much debt they have accumulated.

True to the disproportionate impact of the COVID-19 pandemic on Gen Z, more than half (51 per cent) of respondents say they have experienced anxiety related to debt during the pandemic. Tied to this, 41 per cent have seen their debt level increase because of the pandemic. Again, both proportions increase for those in less stable financial situations, at 81 per cent and 73 per cent respectively.

Banks in Canada work diligently to help their customers succeed financially at every stage of life. Indeed, they are here to help at every step and Canadians are encouraged to talk to their banks early in the process of managing their debt and creating their financial plans, and frequently as they go through changes in their lives.

The survey of Gen Z Canadians found that 69 per cent of Gen Zers have sought advice regarding financial planning or debt management, however only 47 per cent say a financial plan is key to a secure financial future. The most cited sources are friends and family (52 per cent), followed closely by financial institutions (30 per cent). The same survey revealed that 80 per cent of Gen Zers trust their bank and 85 per cent say that their bank is meeting their needs. This shows that there is opportunity for banks to further engage with younger Canadians to help them chart a path to financial well-being.

Banks are committed to helping Canadians take the necessary actions to help them make financial progress amid the ongoing pandemic. Working together with their Gen Z customers, banks can help set and maintain good financial habits that will help them get and stay ahead financially.

A total of 763 Canadians aged 18-25 were interviewed online in June 2021. The sample was designed to reflect Canada’s population of young adults according to gender, education, income, origin class and region. A comparable probability sample would have a margin of error of +/- 3.5%, 19 times out of 20.

DVP and Gardiner have been closed temporarily due to Toronto blizzard

Here are Saturday’s winning Lotto 6/49 numbers and other OLG lottery results from Jan. 15/2022

DO NOT FEED COYOTES! City of Toronto warns residents after reports of people leaving food out in Colonel Samuel Smith Park

Is it Legal to Watch Geo Restricted Streaming Services in Canada with a VPNI?

Here are Ontario’s Most Popular Baby Names registered in 2020

All laced up and waiting for the Zamboni to finish