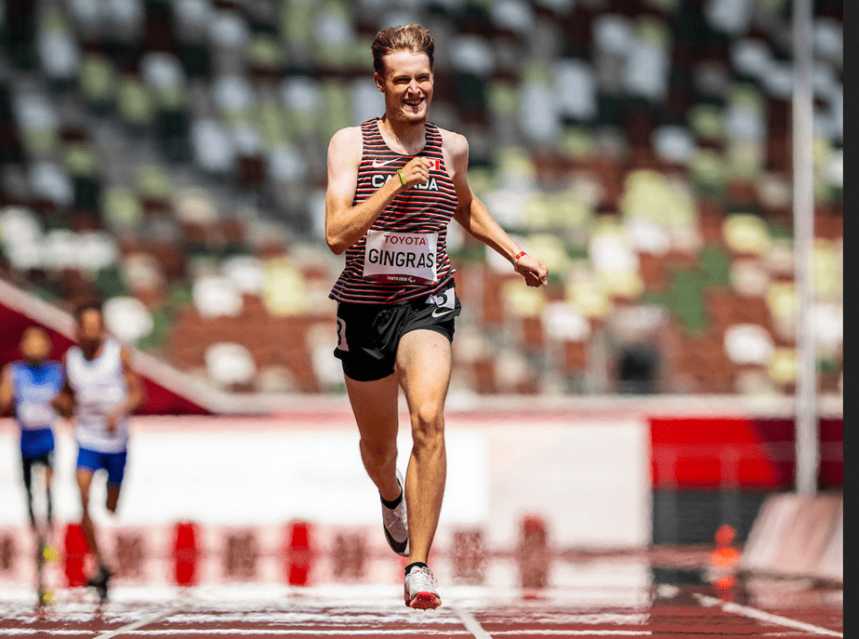 With Moncton’s Danielle Dorris winning silver in Para Swimming, Women’s 100m backstroke Canada has now won a total of 12 medals. Danielle Dorris earned her first podium with a second-place finish in the women’s 100m backstroke S7. The 18-year-old – who at age 13 was Canada’s youngest team member at Rio 2016 – burst out to a fast lead in the race and began the back 50m in first. She was just chased down in the end by now two-time Tokyo gold medallist Mallory Weggemann of the United States, who set a new Paralympic record with the win. Dorris’s time of 1:21.91 was also faster than the previous Paralympic high mark.

“It feels very surreal,” said Dorris. “I feel like I’m going to wake up from a dream back home in Canada and this has never happened. But here I am with a medal.”

Canada has advanced into the men’s wheelchair basketball quarterfinals with a crucial 63-52 victory over Colombia. The team headed into their final round-robin game with a 1-3 record, knowing that a win would assure them a spot in the knockout rounds, and they delivered. Patrick Anderson (Fergus, ON) nearly posted a triple-double with 22 points, 17 rebounds, and eight assists, while Nik Goncin (Regina, SK) added 15 points, seven rebounds, and eight assists. Colin Higgins (Rothesay, NB) and Bo Hedges (Wonowon, BC) also scored in the double-digits, with 14 and 10 points apiece.

“We executed exactly kind of how we wanted to in the first half and did what we wanted,” said Hedges. “Then in the second half they came out, we knew they were going to battle, they weren’t going to give up, they still had a chance to get through to the quarterfinals. Colombia came out and fought hard, and we were able to weather the storm. It wasn’t necessarily the prettiest win in the end, but we got the win, and we get through to the quarters now.”

After a slow 0-3 start to the tournament, the Canadians finished the group stage 2-3, good for fourth in Group A and a place in the quarterfinals where they will face Great Britain on Wednesday. Canada also improves upon its Rio 2016 11th-place result.

Zachary Gingras (Markham, ON) qualified for his first Paralympic final, advancing through the men’s T38 400m heats with the third-fastest qualifying time at a personal best of 51.81. He will race for a medal in Tokyo on Tuesday.

Racing for the fourth consecutive day, Brent Lakatos (Dorval, QC) missed out on qualifying for the men’s T54 1500m final. The world record holder in this distance, he was not able to replicate that blistering pace as he finished fifth in his heat. Lakatos already has two silver medals in Tokyo in the 5000m and 400m distances, with the 100m, 800m, and marathon remaining.

Jessica Frotten (Whitehorse, YT) also did not advance in the women’s T54 1500m, finishing seventh in her heat.

On the final day of preliminary action in individual boccia competition, BC2 player Danik Allard (Bois-des-Filion, QC) closed out his tournament on a high, earning his first-ever Paralympic win in resounding fashion 12-1 over RPC’s Diana Tsyplina.

The BC4 event saw Iulian Ciobanu (Montreal) drop an 8-2 decision to China’s Zheng Yuansen, who scored seven points in the final two ends to claim the win. Ciobanu finishes 2-1 in the round-robin, just missing a chance to advance into the quarterfinals. Alison Levine (Montreal) also concluded her individual competition with an 8-2 loss to Croatian Davor Komar, bringing her pool play record to 1-2. The BC4s will next see action in the pairs event starting on September 2.

Following horse inspection in the morning, Lauren Barwick (Aldergrove, BC) was bumped up into the Grade III individual freestyle test event alongside horse Sandrino. She originally had just missed out by one qualifying spot. The five-time Paralympian and Beijing 2008 gold medallist, who thought her Tokyo Games was already over, took advantage of the extra opportunity to compete and posted a sixth-place finish.

“I was really surprised and so pleased and grateful to the universe for the opportunity to ride for my freestyle because it’s one of my favourite tests to ride,” said Barwick, who has only been riding with Sandrino for less than two years.

“These are the best riders in the world, they didn’t just wake up a month ago and say, ‘Hey, let’s go to the Paralympics,’ so the judges know what they’re looking for. They’re looking for that level of refinement at this stage to really reward us with those scores that we’re looking for. We just don’t have that level of refinement yet, so I’m pleased – not so pleased with the scores, they’re the lowest scores I’ve ever had in a freestyle – but I’m not going to let that take away from the fact that today I got to take Team Canada into the arena.”

Karen Van Nest (Wiarton, ON) was eliminated in the 1/8 round in Para archery, in an incredibly close duel against China’s Lin Yueshan. The two were nearly inseparable throughout all five ends – tied after two ends, Lin holding a one-point advantage after three ends, and then Van Nest leading 113-112 heading into the final end. Lin ultimately pulled off the win 142-140. With the loss, Van Nest just misses out on the quarterfinals. This was Van Nest’s sixth Paralympic Games appearance, and her third in the sport of Para archery.

“Despite the outcome, I was more in control of my nerves today and I’m pleased with my score,” Van Nest said. “It was the highest I’ve ever scored in a Paralympic match! This was a great event, and many new records were set, which was amazing to be a part of. I’m very thankful for all the support I received from both near and far.”

Canada will not advance in women’s goalball after the team dropped its final preliminary game 4-2 to China. The Chinese jumped out to a 3-0 lead in the first half, and while Canada narrowed it to 3-2 at one point, it ultimately was too much of a deficit to overcome. With a 1-3 overall match record, the Canadians finish fifth in Group A.

“Everybody is extremely disappointed. We didn’t accomplish what we set out for,” said team captain and four-time Paralympian Amy Burk (Charlottetown, PEI). “But we never gave up and we are really proud of each other.”

In their first event of the Games, Lyne Tremblay (Magog, ON) and Doug Blessin (Port Coquitlam, BC) competed in the mixed 10m air rifle standing SH2, finishing in 27th and 28th place, respectively. Both will be back on September 1 for the air rifle prone event.