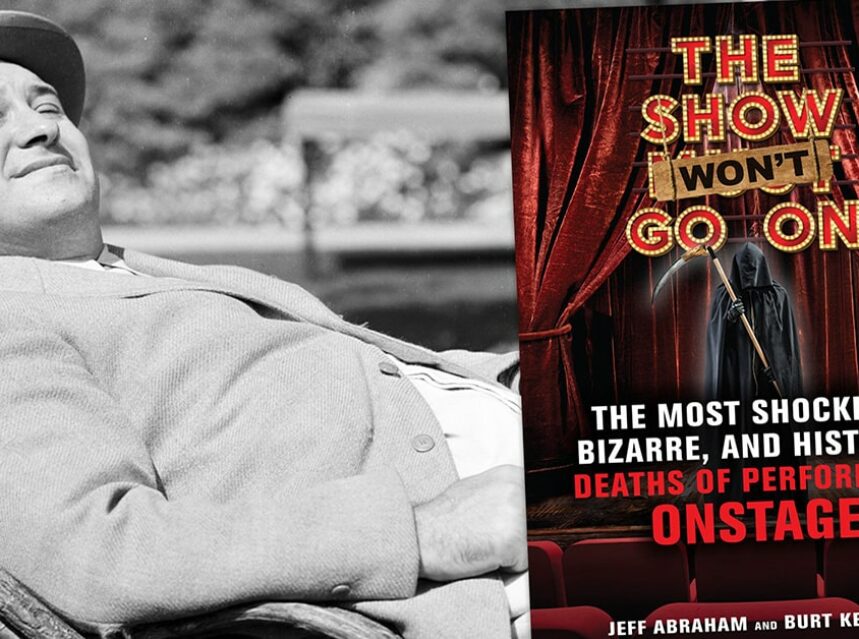 In the world of comedy, when a comedian does a set onstage and it barely gets a laugh or a chuckle from the audience, people in the industry would say that the hapless comedian just “died”.

But what happens when a performer takes that literally, and really dies onstage?

Ever since there has been entertainment for the masses, there have been instances when entertainers (not just comedians, but also actors, magicians, singers, musicians, circus performers and even symphony orchestra conductors), have made their unexpected final bows in mid performance in front of a live audience … and yet some have thought that it was part of their act, not realizing the performer has tragically expired, and won’t live to entertain for another day.

Showbiz publicist and pop culture expert Jeff Abraham and journalist/writer/producer/director Burt Kearns have held a rather morbid fascination on the subject of the grim reaper’s dabbling in the performing arts, and the duo have come up with a page-turning catalogue of these bizarre examples of literal “farewell performances” in their book The Show Won’t Go On.

The book runs the gamut of onstage showbiz deaths over a 500-year time period. Although the majority cause of death is a heart attack, there are also shootings, suicides, and onstage mishaps (such as having a ton of lighting equipment falling on you during a windy outdoor concert, which happened to soul singer Curtis Mayfield). Although the stories involve well-known and not-so-well-known entertainers, Abraham and Kearns have a penchant for thorough, meticulous research, that is so prevalent throughout the book, you may find these stories spooky, tragic, sad or weird, but I guarantee that you will be immediately hooked with every subsequent story that you read (and probably in one or two sittings).

Some of the stories that caught my attention in The Show Won’t Go Oninclude:

-Popular British comedian/magician Tommy Cooper, who dropped dead of a heart attack in mid-performance … during a live broadcast of the TV show “Live At Her Majesty’s” on April 15, 1984, and how other British performers such as Eric Morecambe, Dustin Gee, Sid James and Kenneth Horne – either preceding or following Cooper’s death – fell victim to the “Tommy Cooper Effect”.

-Nutritionist and health expert J.I. Rodale suddenly died from a heart attack during a live taping of “The Dick Cavett Show” on June 8, 1971, after he proclaimed that thanks to his healthy living habits he would live to be 100 years old. The show never aired and it took Cavett about 40 years before he could muster up the courage to watch a recording of that never seen broadcast.

-Chinese magician Chung Ling Soo, whose claim to fame was his bullet-catching trick, was shot and killed onstage during a performance in 1918 when one of the guns used in his act contained a real bullet. The audience in attendance that night were shocked by two things: that Chung Ling Soo was accidentally shot to death at point blank range, and that he wasn’t Chinese at all. He was English and uttered his final words perfectly in that language.

-And probably one of the saddest stories to come from the book deals with dialect comedian Harry Einstein, whose was better known for his alter ego “Parkyakarkus” and as the father of future actor/comedians Albert Brooks and Bob Einstein (aka “Super Dave Osborn”). In 1958, during a low point in his career, Einstein did a comedy routine during a star-studded Friars Club gala testimonial dinner that honoured Lucille Ball and Desi Anraz. Einstein had the audience in gales of laughter with his routine (which is practically reprinted word for word in the book) and got himself a standing ovation. Immediately afterward, Einstein was chatting with Milton Berle, when he suddenly put his head on Berle’s lap and died from a heart attack. The 1200 people who attended the event that night were so shocked at the sudden death of Einstein, the dinner was cut short at Arnaz’s request.

So whether it was Dick Shawn, Tiny Tim, Owen Heart or Jax the Axehandler (a hip hop singer from Atlanta), they have all become a sort-of deadly group of entertainers whose tragic endings have now been immortalized inThe Show Won’t Go On, which offers in luridly fascinating detail, a rather dark type of showmanship: keeping your audience entertained until the final curtain actually falls upon you for eternity.